A U.S. District Court ruled this week that Douglas County schools violated the constitutional rights of a parent and student because the district promoted and fundraised for a Christian mission trip. 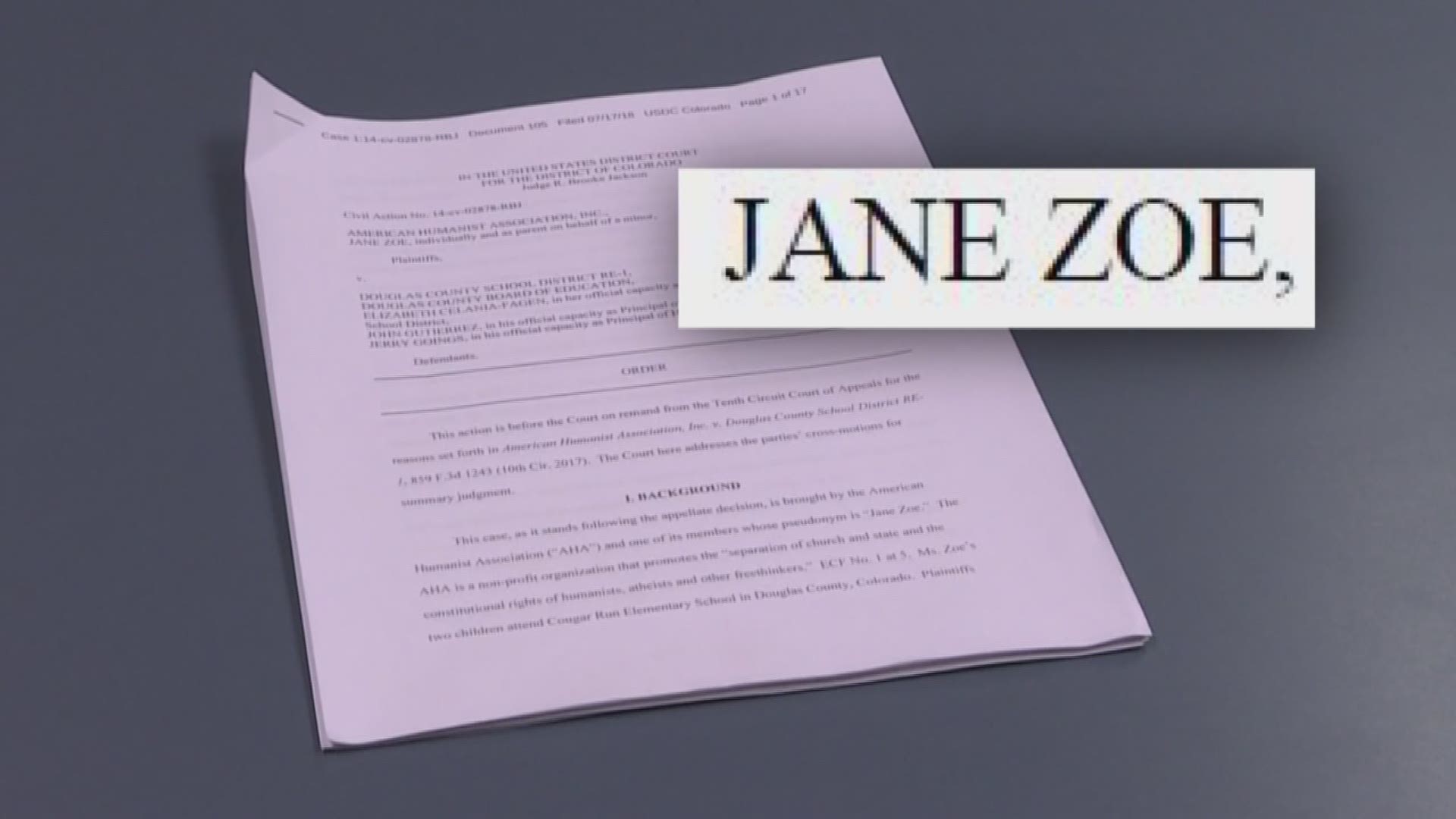 A U.S. District Court ruled this week that Douglas County schools violated the constitutional rights of a parent and student because the district promoted and fundraised for a Christian mission trip.

The case stems from a 2014 mission trip.

It was created by high school students who were members of the school’s chapter of the Fellowship of Christian Athletes (FCA). Court documents say the students were raising money to travel to Guatemala and planned the trip through a Christian mission planning organization called “Adventures in Missions.”

One parent in the district, identified in court documents as "Jane Zoe," said her pre-schooler was sent home with a flyer about a supply drive to help the mission trip. "Zoe" said she also got emails from teachers and a principal in the district asking for donations.

"Jane Zoe" argued that was a violation of her and her son's rights, guaranteed by the Establishment Clause of the First Amendment.

According to court documents, Zoe said her son "felt coerced into participating and contributing to this religious fundraiser,” and said, "As non-Christians, the school's actions in promoting and endorsing a Christian organization . . . made us feel like outsiders and unwelcome in our own community."

Court documents say the school district argued the supply drive and mission trip were not religious in nature, but instead had the effect of “an increased awareness of and appreciation for poverty in a Latin American country, and a feeling of pride that [DCSD schools] sought to help poor children in an area of the world they were studying in class.”

In the order signed this week, U.S. District Judge R. Brooke Jackson wrote the district violated the constitutional rights of the parent and her son.

“The Court finds that the defendants’ actions amounted to ‘an excessive government entanglement with religion. Defendants supported an overtly Christian cause through financial donations, through sending emails and flyers to students’ families, and through hosting the supply drive during school hours over the course of a school week.”

In an emailed statement Wednesday, Paula Hans, a spokeswoman for the school district said:

“The Douglas County School District is aware of the decision and we are currently reviewing the matter. We will determine the next steps once we have analyzed the decision."

The court's ruling calls for both sides to meet and reach an agreement on the terms of the ruling in the next few weeks.

"Jane Zoe" was represented by the American Humanist Association. On the organization’s website, it says it defends civil liberties, secular governance, and scientific integrity.

“Religious minorities in public schools should never be faced with a school-sponsored activity that promotes the majority religion,” said AHA legal director David Noise in an online press release about the ruling.

“The court’s ruling correctly finds that the district’s activities had the effect of promoting religion and excessively entangled the government with religion.”