A spokesman for DPD told 9NEWS officers are expected to report uses of force, even in these protest situations, though the reporting from protests may be more broad. 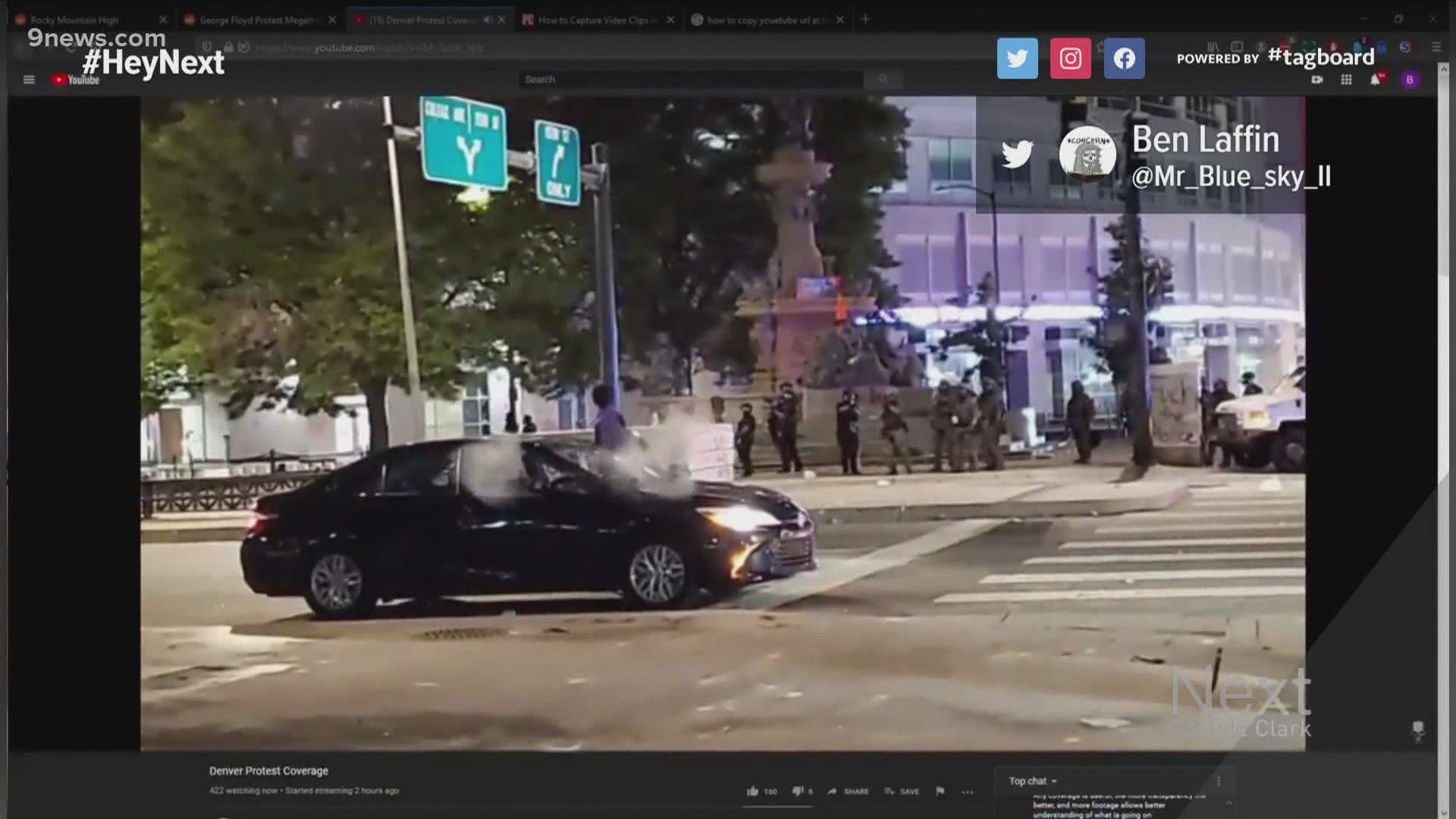 DENVER — Videos gaining traction on social media showing officers from the Denver Police Department (DPD) using force on protesters who don’t seem to show aggression will get a look from the department’s internal affairs division, the police chief said Monday.

One video, showing an officer firing a pepper ball round at a man recording video with his cell phone has been shared tens of thousands of times.

Another video, shot by a man from his car on Friday, appears to show a Denver Police Officer spraying pepper spray through the sunroof of a car that had stopped behind a protester in the road.

In that video, recorded by Alejandro Gort, the officer doesn’t appear to give any verbal commands to Gort or his partner before using the non-lethal force.

Gort told 9NEWS Monday that his partner was driving the car. The two sped away after the officer sprayed, and within moments neither of them could see.

“All of a sudden your eyes start watering up…can’t see can’t breathe,” Gort said. “It was just unnecessary. We were moving anyways. It was just… there was no communication.”

On Sunday, Denver Police Chief Paul Pazen explained use of force guidelines to reporters. Essentially, the only time officers can deploy this type of force is if they are facing active aggression like a protester throwing a rock or some fireworks, Pazen said.

“I have been made aware of some videos and I have personally forwarded those to internal affairs and I’m the complainant to really get to the heart of what occurred to make sure they’re either in policy or out of policy,” Pazen told 9News in an interview on Monday. “Anything that is out of policy we’ll certainly hold our officers accountable. That’s certainly the crux of this whole thing we’re talking about accountability.”

Pazen said officers wear body-worn cameras while watching over these protests, though those cameras are only turned on when the officer starts and encounter with a protester.

“We don’t have them recording all day…typically if they’re being engaged that’s the time they’d be turning them on,” the chief said.

He also said police officers from neighboring jurisdictions who have been helping Denver Police with recent protests are embedded with Denver Police supervisors who monitor and communicate the city’s use of force guidelines, in case they differ from the policies of neighboring departments.

A spokesman for Denver Police told 9NEWS officers are expected to report uses of force, even in these protest situations, though the reporting from protests may be more broad. According to Sonny Jackson, an officer would not have to report each time they deployed tear gas or a pepper bullet, instead summing all of their actions up in the report.

Pazen could not comment directly on Gort’s video, only saying all videos would be forwarded to internal affairs to determine if they violated police policy.