DPD Chief Paul Pazen also said three officers injured when a car drove into them are expected to make a full recovery, and a suspect vehicle has been found. 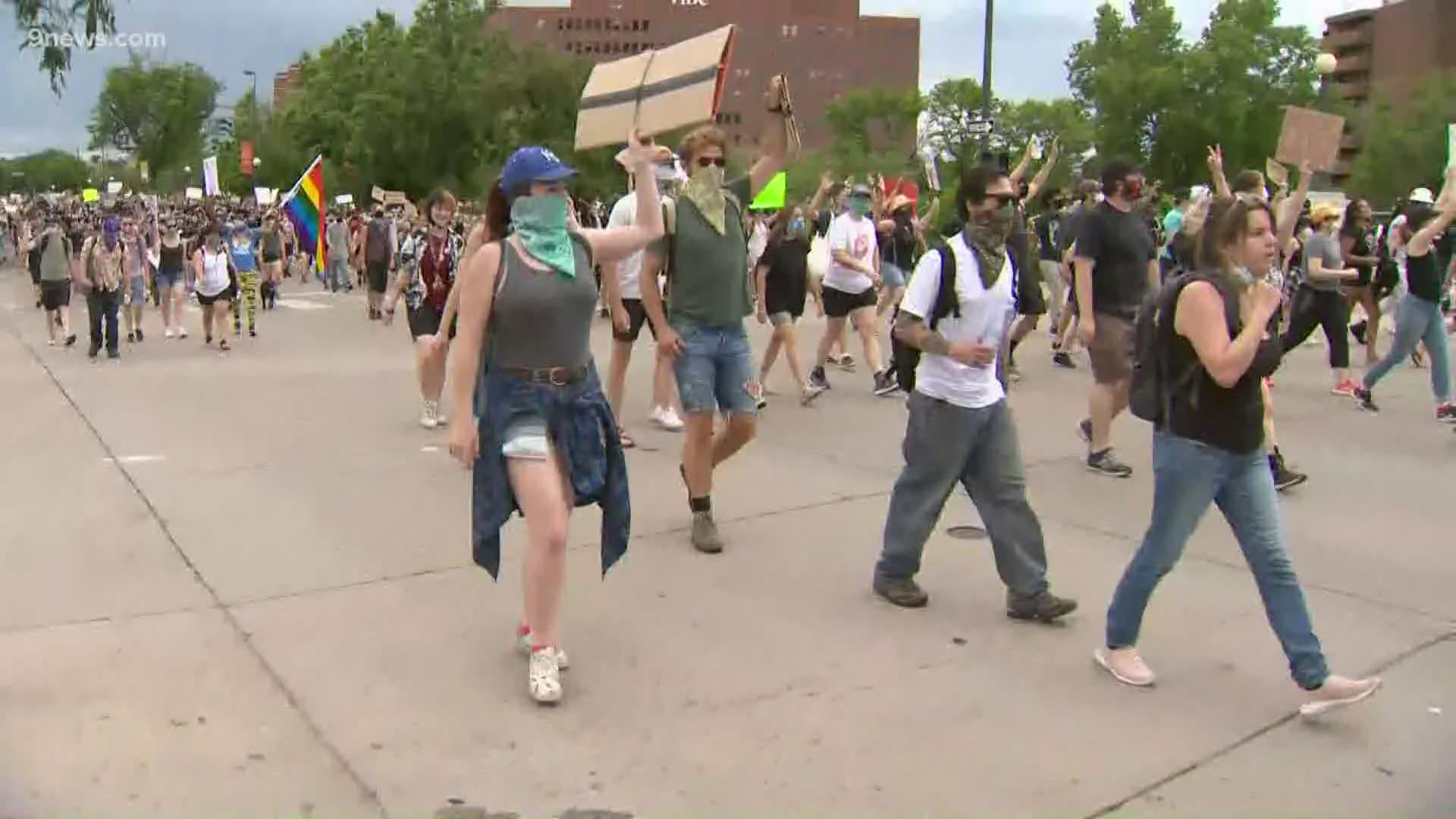 DENVER — Denver Mayor Michael Hancock during a news conference on Sunday invited anyone in Denver demonstrating over the in-custody death of George Floyd in Minnesota to get a free test for COVID-19 at the Pepsi Center next weekend.

"We are still in the midst of a pandemic. We did see and we have witnessed people demonstrating in our community [...] without face coverings," Hancock said.

The testing site at the Pepsi Center will be open from 8 a.m. to 4 p.m. on Friday, Saturday and Sunday, according to Hancock.

"It's free, it's quick, it's painless and at least we can use that opportunity to blunt the spread of the coronavirus," Hancock said.

Hancock also thanked volunteers who showed up Sunday morning to help clean up trash and debris from the demonstrations.

He said that anyone who wants to help with the cleanup should find one of two Waste Management employees who will be at Civic Center Park at 8 a.m. on Monday.

Denver Police Department (DPD) Chief Paul Pazen said three officers and a civilian were injured when a vehicle drove directly into them on Saturday night, and that a suspect vehicle has been found.

Two officers in the incident have been released from the hospital, and all three are expected to make a full recovery, he said.

"Every one of them said to me last night they were ready to get back on the pony and to asst with keeping this city safe," Hancock said. "We thank them for their service, and we keep them in our thoughts and prayer."

A civilian also injured in the crash remains in the hospital, according to Pazen.

A short time after the press conference, DPD confirmed a man's arrests in connection to the incident. 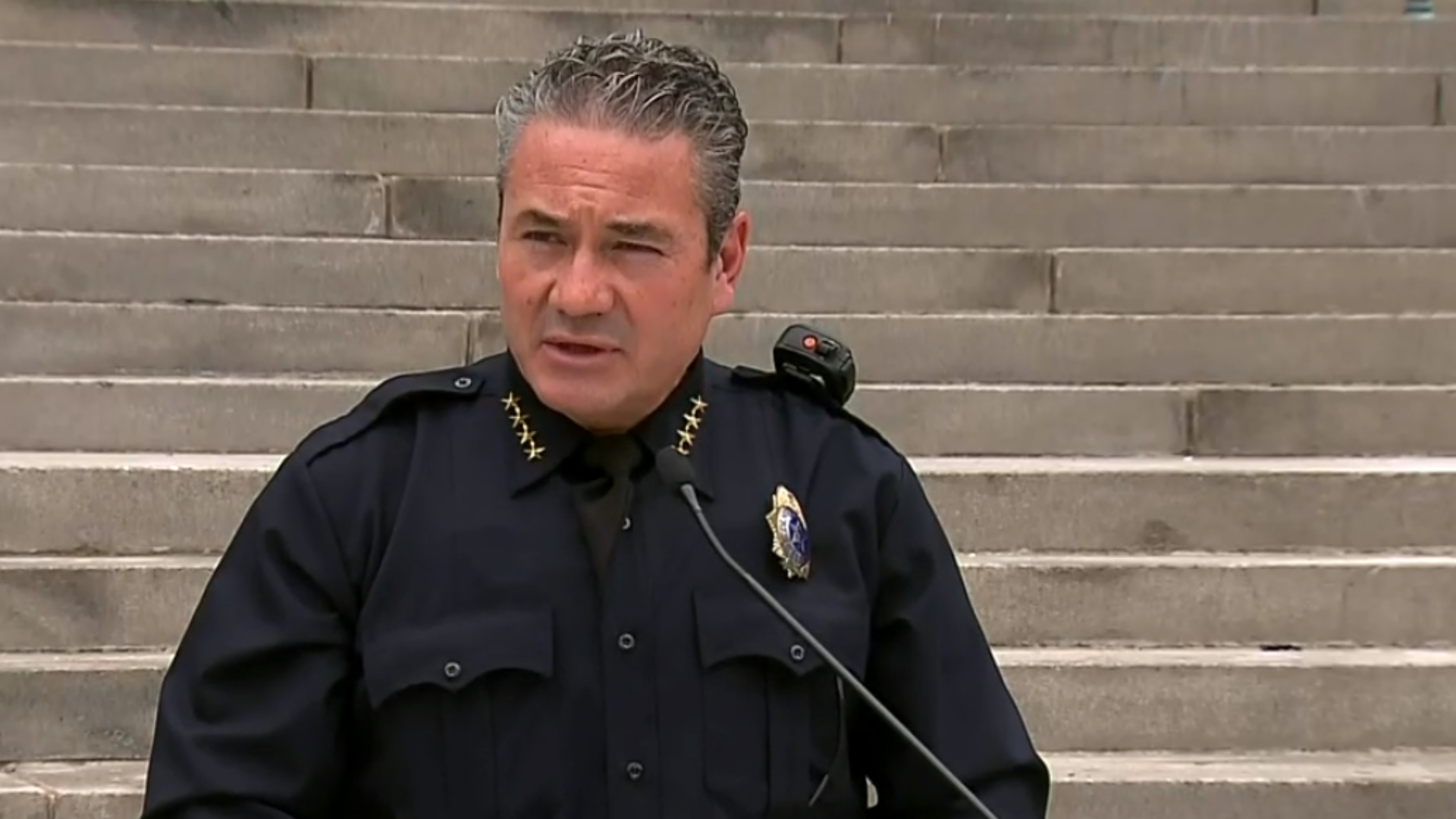 Denver Health paramedics logged 45 calls Saturday night specifically related to protests, a spokesperson for the hospital said. Of those calls:

The nature of the injuries was wide-ranging. Denver Health can’t give specifics but said injuries were anywhere from eye irritants and projectile injuries to more serious injuries.

"Denver Health Paramedics are committed to providing care for everyone in our community, and we are just as committed during these unsettling times. We have been providing emergency medical response during the protests in Downtown Denver, caring for protesters, members of other public safety agencies and anyone in need.

All Denver Health Paramedics and emergency medical technicians (EMTs) have been specially trained to enter volatile and dangerous situations for rapid care and extrication. Because the risk of injury to the Emergency Medical System (EMS) is high in these situations, our crews, who are unarmed, are wearing ballistic helmets and vests for improved safety. We are committed to the safety of our patients and crews, and in coordination with the joint command post, Denver Health Paramedics and Denver Police officers jointly respond to these emergencies. During these protests our ambulances have been attacked numerous times, and the coordination with police helps ensure we can enter and exit a situation safely and provide care for everyone in need."

A curfew remains in effect for the City and County of Denver from 8 p.m. on Sunday to 5 a.m. on Monday. Denver's mayor urged anyone planning to demonstrate to go home before curfew begins.

"Let's not have a night like we've had the past few nights," Hancock said.

“We’re determined to continue to support peaceful demonstrations so people’s calls for change and justice can be heard,” Mayor Hancock said, “But if anyone attempts to hijack these protests to incite violence and vandalism, we will do everything we can to stop it.”

Pazen said that people of color and young people in Denver are disproportionately impacted by unjust violence, and asked the community to work together to keep the people of Denver safe.

"Let us, the City of Denver, the People of Colorado, be the light of change. Let us unite and show the country what it means to stand together as one community against injustice."

Three nights of riots, that have included vandalism, fires and looting, prompted Hancock to implement the curfew for Saturday and Sunday nights.

Police largely gained control over the situation Saturday night in downtown Denver less than two hours after the curfew went into effect.

The riots followed peaceful protests during the day Thursday, Friday and Saturday in response to the death of Floyd in Minneapolis.

About 30 to 40 small fires ignited in dumpsters and on items like mattresses and trash piles starting shortly after 8:30 p.m.

The area surrounding the Capitol cleared out about 8:45 p.m.

The curfew will be in effect from 8 p.m. Sunday to 5 a.m. Monday morning. There is an exception to the curfew for law enforcement, firefighters, medical personnel, the Colorado National Guard, members of the media, anyone traveling to or from work or the airport, anyone fleeing danger, those experiencing homelessness and those who need immediate medical care.

The curfew applies to anyone on foot or in a vehicle in any space accessible to the public in the City and County of Denver, and DPD said officers will be enforcing it.

Denver City Attorney Kristin Bronson said punishment for violating curfew could be a fine of up to $999 dollars and/or imprisonment of up to 300 days in jail.

"Once 8 p.m. hits, our message is very simple: 'Go home,'" Hancock said. "If you are planning on come downtown tonight, stay home."

Denver Police said 84 people were arrested Saturday night in downtown Denver, all except one being arrested after the city's curfew went into effect.

The 83 people arrested after 8 p.m. are all facing a charge of curfew violation, and some others face possible charges of throwing projectiles, damaging property and having prohibited weapons, according to DPD.

That makes for a total of 118 arrests by DPD from the protests since Thursday night. The names and charges of most of the suspects won't be released until Monday at the earliest, according to a DPD spokesperson.

During a press conference on Saturday, Hancock praised three demonstrations that took place on Friday and concluded without any violence, and took aim at "a few agitators" who he said were hijacking the peaceful demonstrations.

Hancock and Pazen emphasized that it was a few agitators who were inciting violence with homemade explosives, rocks, bottles, graffiti and vandalism.

Pazen asked peaceful protesters not to tolerate any agitators and asked them to weed out anyone trying to incite violence: "We are asking the good to help weed out the bad."

Gov. Jared Polis ordered soldiers from the Colorado National Guard Reaction Force to mobilize to "support the City and County of Denver and local law enforcement to ensure public safety."

RTD on Sunday announced it will continue to suspend all bus and rail service into and out of downtown Denver through the end of the service day Monday in light of the ongoing protests in the downtown area.

RTD said it made this decision out of an abundance of caution to ensure the safety of its employees and riders due to the unpredictable and destructive nature of the protests.

RELATED: Officials blame 'outsiders' for violence as Trump says antifa to be labeled a terror group