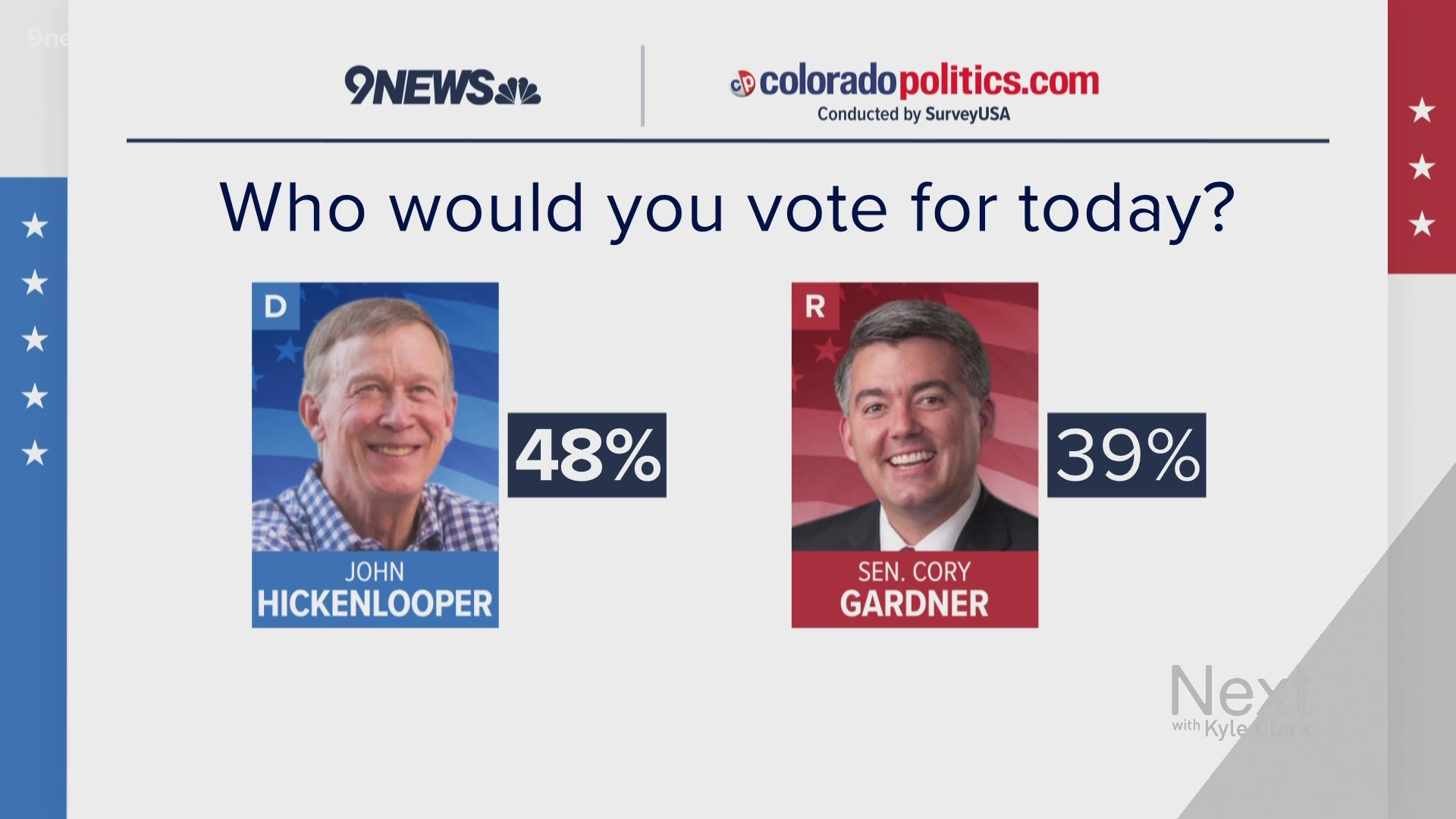 DENVER — It's the Democrats’ race to lose.

A 9NEWS/Colorado Politics survey of 1,021 registered likely voters in the state shows Democratic presidential candidate Joe Biden has a double-digit lead over President Donald Trump in Colorado going into the 2020 election.

The poll, conducted by SurveyUSA between Oct. 1 and Oct. 6, also shows the vote on Proposition 115 could be close. The measure would ban abortions in Colorado after 22 weeks.

Overall, when asked which issue was most important ahead of the election, the biggest majority of Coloradans surveyed -- 49% -- are focused on the economy.

Of the voters surveyed, 79% said they are certain they will vote in 2020, and 13% are almost certain. Three percent of people are not interested.

Keep scrolling down for a summary of the polling on Colorado's senate race, the race for president in our state and key ballot measures.

A credibility interval is different from a margin of error and is used to measure the accuracy of non-probability-based surveys, according to the American Association for Public Opinion Research.

The survey took place before, during and after Trump announced he tested positive for COVID-19 last week.

One-third of the response (34%) was received before the president announced on Twitter that he and First Lady Melania Trump tested positive for COVID-19.

One-in-10 interviews (9%) took place after the tweet, but before the president was admitted to Walter Reed National Military Medical Center.

The majority of the interviews (58%), occurred either while the president was hospitalized or after he returned to the White House on Monday.

RELATED: FAQS: Your questions about voting in Colorado, answered

The survey reveals large gaps for both Trump and Gardner.

Biden currently leads Trump by 10 points in Colorado, up one percentage point since interviews conducted before the president contracted COVID-19.

Biden received 50% support of those likely to vote by Nov. 3, with the president receiving 40%. Five percent of those asked said they were choosing a different candidate.

While Biden is ahead, of the Colorado voters who deemed the economy as the most important issue to them, Trump led Biden by six percentage points. Among voters who picked “law and order” as a top priority, Trump was ahead of Biden 70% to 23%. Biden, however, was deemed the candidate to keep people safer, with 50% to 41%.

Among voters who said “social justice” is most important, Biden led Trump 83% to 10%.

In the race for U.S. Senate, Hickenlooper leads Gardner 48%-39%. Eight percent said they were undecided.

Male voters are evenly split in the Senate race, though Hickenlooper has 52% of surveyed female voters contrasting with 33% for Gardner. Hickenlooper is also ahead with Hispanic voters (57% to 30%) and independent voters (46% to 31%).

Of those Coloradans voting for Trump at the top of the ticket, 83% are sticking with Gardner down the ballot, while 88% of the Biden voters say they're opting for Hickenlooper.

The Colorado race has been pegged as key by both parties to winning the majority in the GOP-controlled Senate after the November election. Democrats need to net four seats to take the gavel, or three seats if the party wins the White House.

Gardner is considered the most vulnerable Republican senators on the ballot this year, as Colorado's electorate has shifted leftward in the six years since he won the seat and the state has voted for the Democrat in the last three presidential elections.

Gardner scores best among likely voters who describe themselves as conservative, with 81% saying they plan to vote for the Republican, compared to 88% of liberals who are siding with Hickenlooper. But Gardner trails Hickenlooper by 19 percentage points among self-described moderates, the largest share of the state's electorate, with 49% picking Hickenlooper and just 30% going for Gardner.

Geographically, Hickenlooper holds a slight edge over Gardner in Western Colorado, 48% to 45%, and trails the Republican in the Colorado Springs region, 41% to 34%. The former two-term mayor Denver, however, has a wide lead in the Denver metro area, 53% to 36%.

Both Gardner and Hickenlooper will meet on Tuesday for "Race for the Senate," a debate airing on 9NEWS and presented by Next with Kyle Clark. The debate will be held with seven other media outlets: The Fort Collins Coloradoan, Colorado Politics, Rocky Mountain PBS, KRDO in Colorado Springs, KJCT and KKCO in Grand Junction and KOBF in the Four Corners.

This partnership makes this the only debate in Colorado's 2020 U.S. Senate race that will be televised statewide.

On the topic of COVID-19, the survey asked the 1,021 likely voters about Trump's response to the coronavirus.

Based on survey results, those who already liked the president likely support his current actions. Of the 402 people who said they voted for Trump in 2016, 4-out-of-5 (79%) approve of his response to COVID-19.

For comparison, we also asked voters what they thought of Democratic Gov. Jared Polis' response to COVID-19.

For Republicans, 53% found the president extremely favorable and 6% found him extremely unfavorable.

The number of unaffiliated voters who found Gardner either unfavorable or extremely unfavorable was 51%.

The number of unaffiliated voters who found Hickenlooper either unfavorable or extremely unfavorable was 46%.

Perhaps most surprising, because Colorado voters have rejected a half-dozen other ballot issues trying to limit abortion access, Proposition 115 is close a month ahead of Election Day.

According to the poll:

Of people certain to vote down the measure, 51% are independent voters. 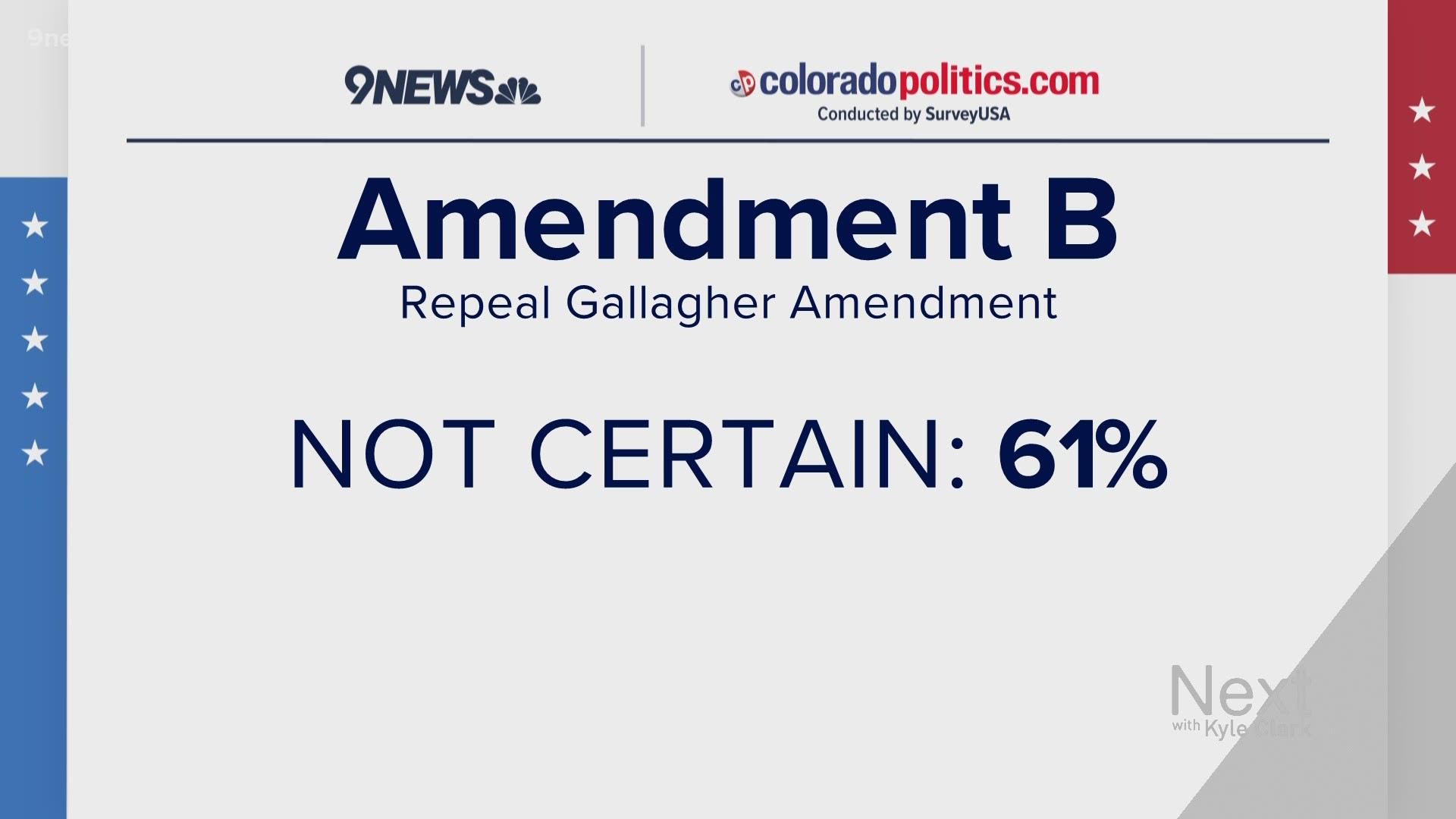 Lawmakers don't always have the final say. For the first time since 1932, Colorado voters will decide if a bill passed by the legislature and signed into law by the governor, will actually take effect.

Proposition 113 would tie Colorado’s nine electoral college votes to the presidential candidate who gets the most votes nationwide. It would not take effect this year and does not take effect at all until enough states agree.

The survey showed voters are split on the National Popular Vote measure:

The issue that state lawmakers have failed to figure out over the last few years looks overwhelmingly likely.

Proposition 118 is the paid family and medical leave insurance program for 12 weeks off for family or medical reasons that would be paid through a payroll tax, half by employees and half by employers.

Republicans are split on this, with 38% voting in favor and 37% voting no. The majority of Democrats and independent voters are in favor.

SurveyUSA also discovered we have a lot of work to do to educate voters on the statewide ballot issues.

The survey interviewed 1,109 registered voters, but only engaged 1,021 voters "likely to vote" for the majority of the questions. Of the 1,109, the party affiliation breakdown is as follows:

Here is why party affiliation is different than seeking specific voters by party registration, according to SurveyUSA.

"We don’t ask voter registration, which often is a poor indicator of voter intent and which has the further disadvantage of being poorly remembered by those who don’t tend to vote in primaries, but party affiliation, which we find shifts fairly frequently as does the mood of the electorate, especially among those who are officially registered without a party affiliation."

Here is an article from the Pew Research Center, CNN and the LA Times on the topic of party affiliation and election polls.

RELATED: Don't want to miss important dates leading up to the election? Try one of these phone backgrounds