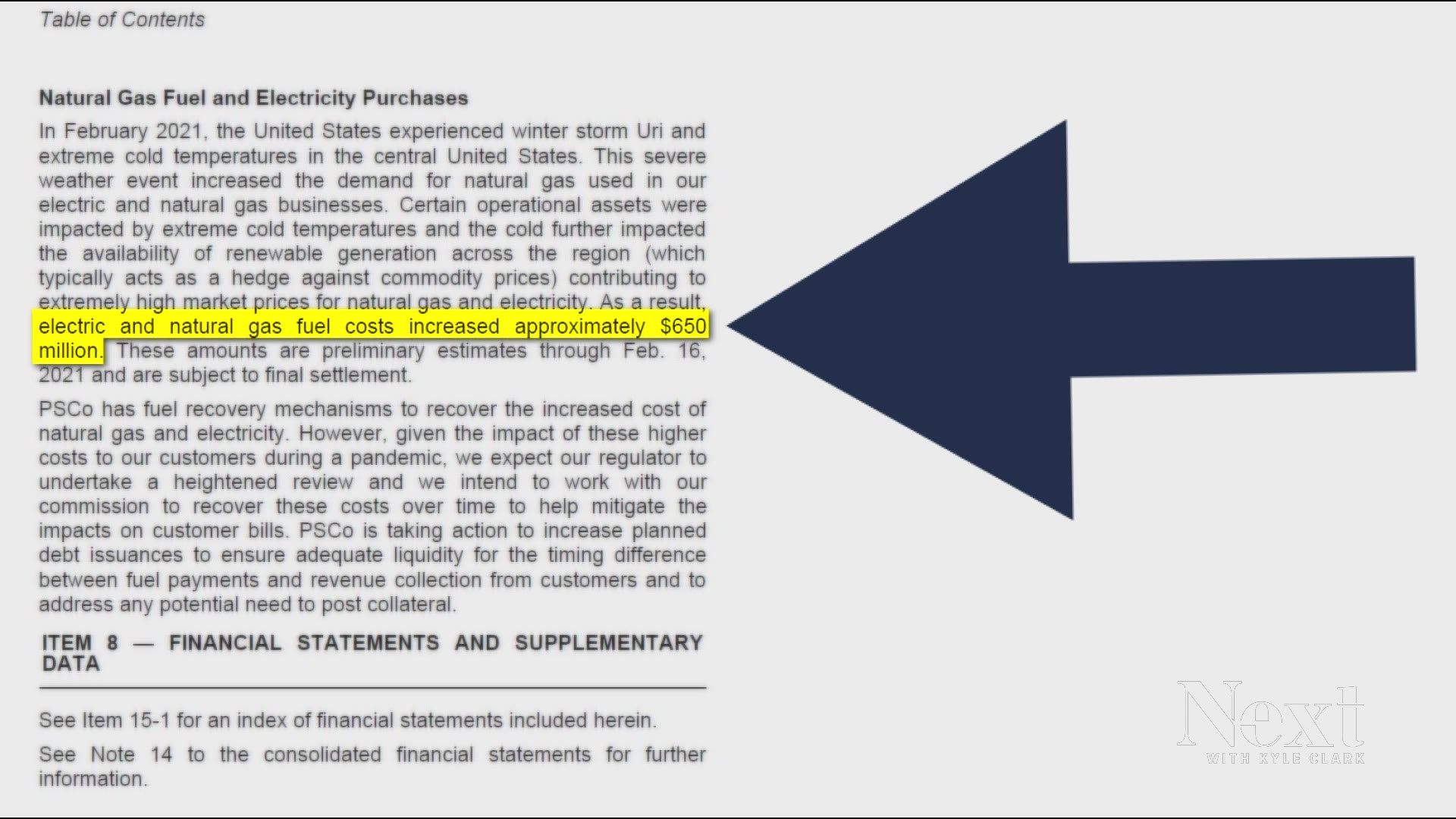 On Wednesday, the Colorado Public Utilities Commission (PUC) gave utility companies until March 5 to provide answers to determine the group needs to prevent any of the costs from being passed on to customers.

The PUC is seeking a variety of information, including natural gas loads, hedging, reserves and if utility companies asked customers to reserve prior to buying really expensive natural gas.

"The typical price of a dekatherm of gas, what we've seen in Colorado, has been below $3 for two or three years now, and probably hasn't exceeded more than about $6 or $7 in the last couple years," Deputy PUC Director Gene Lamb said during a hearing on Feb. 17. "This is on the order of not just 10 times, but even higher than that, close to 100 times as much for the cost of gas."

In its annual report for investors, Xcel wrote "electric and natural gas fuel costs increased approximately $650 million" and that "we intend to work with our commission to recover these costs over time to help mitigate the impacts on customer bills."

Xcel also reported to investors that it took out a $1.2 billion dollar one-year loan, that could be extended for a second year.

Atmos Energy wrote in its investor filing that Colorado, Kansas and Texas "resulted in aggregated natural gas purchases... of approximately $2.5 to $3.5 billion for these jurisdictions."

In a news release, Atmos Energy wrote, "we want to assure customers that bills in the near-term will not include any of the unusually high gas prices from the historic winter storms."

On Tuesday, Governor Jared Polis (D) wrote the PUC a letter encouraging the investigation it had already started.

“It has come to my attention that as a result of the recent extreme winter conditions starting on February 13th across large parts of the country, some Colorado utilities might have purchased natural gas at exorbitantly high market prices and may now seek to pass the cost of the market gas prices along to customers,” Polis wrote.

Polis encouraged the commission, of which he has appointed two of the three commissioners, to “exercise all relevant jurisdictional authority” in their process.

The governor also called for utility companies to notify their customers and allow them to opt into rolling blackouts to avoid high costs.

“If a utility needs an even greater reduction, they can conduct outbound emails and phone calls (such as reverse 911) to customers requesting that they reduce energy usage," the letter said. "As a backstop measure, if extraordinary circumstances warrant and technology allows, customers should also be able to choose whether to opt into rolling blackouts and thereby hold themselves harmless from drastic price increases. Customers should have the choice to reduce or forego power or heat for a couple hours to avoid hundreds of dollars of extra charges in utility costs.”

Polis pointed to the actions of the Platte River Power Authority on Feb. 14 as a success story. The company was unable to ramp up its natural gas peak production due to the supply crunch and asked Northern Colorado customers to conserve their electricity usage.

There was a 10% reduction, which allowed Platte River to meet demand.

RELATED: VERIFY: Does Texas have an independent power grid, and what does that mean?

RELATED: Q&A: How does Colorado differ from the Texas power grid