The homeless advocacy group said the city is planning to sweep the camp Tuesday and Wednesday. 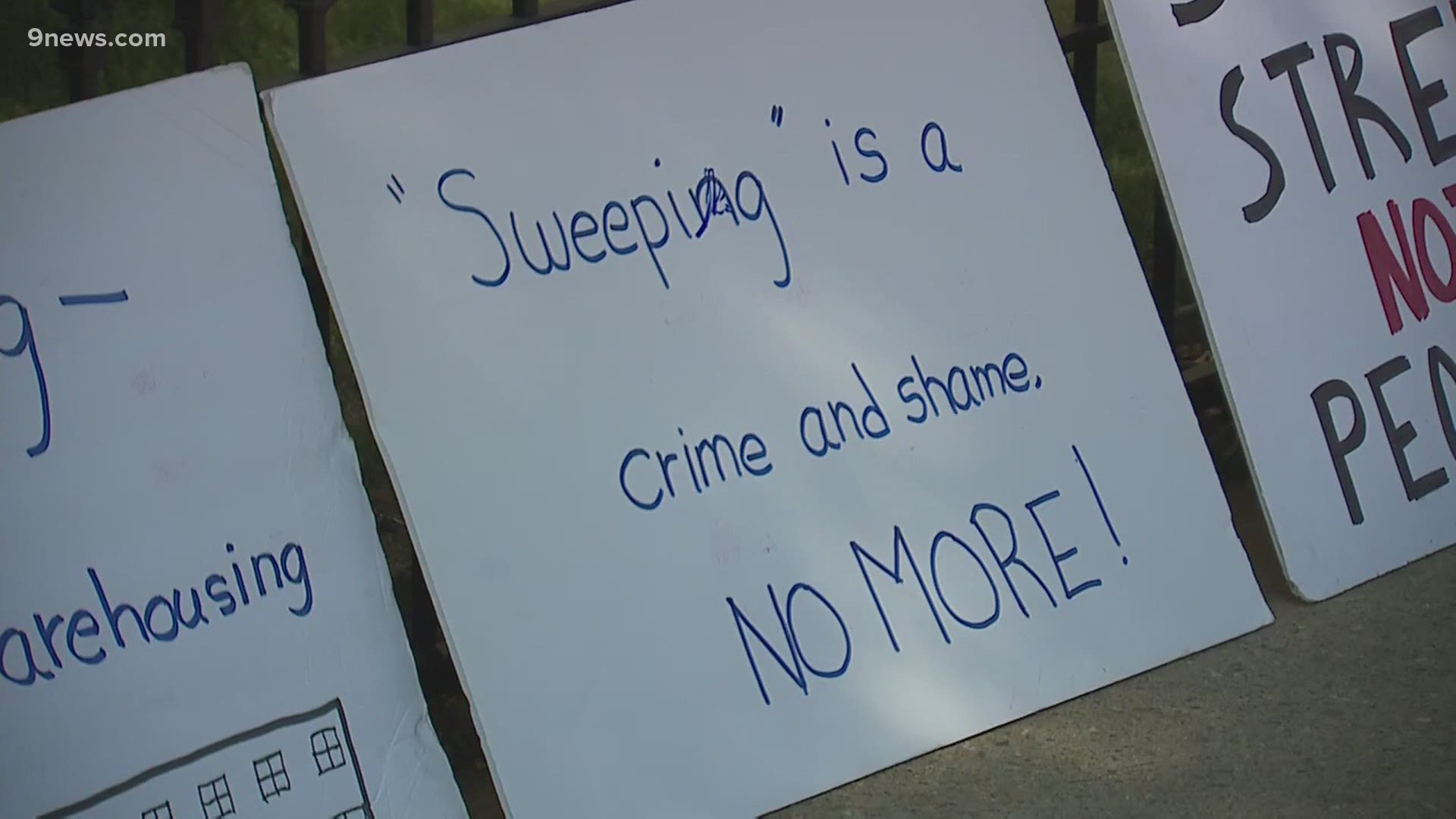 DENVER — An advocacy group for people experiencing homelessness announced Monday that it has filed a class-action lawsuit challenging homeless sweeps as unconstitutional and in violation of a previous settlement agreement.

Denver Homeless Out Loud and Killmer, Lane & Newman, LLP, filed the lawsuit on behalf of a class of Denver's homeless residents, saying the sweeps are in violation of the settlement agreement entered into between Denver and its homeless residents in Lyall v. Denver.

Specifically, the lawsuit sues Mayor Michael Hancock, Gov. Jared Polis and hundreds of Denver and State of Colorado officials for "sweeping homeless encampments near the Colorado Capitol, Morey Middle School and the South Platte River without notice and in direct contravention of CDC guidance," according to the lawsuit.

The lawsuit also claims that, during these sweeps, officials took property from encampment residents and trashed it.

Ryan Luby, spokesperson for the City & County of Denver's City Attorney’s Office, released the following statement about the suit:

“While the city has not yet seen the lawsuit, the city disagrees that it has violated the terms of the settlement agreement. The city works very hard to connect people experiencing homelessness with services, but cannot allow unsafe and unsanitary conditions to continue as it puts everyone at risk, including those who are experiencing homelessness.” 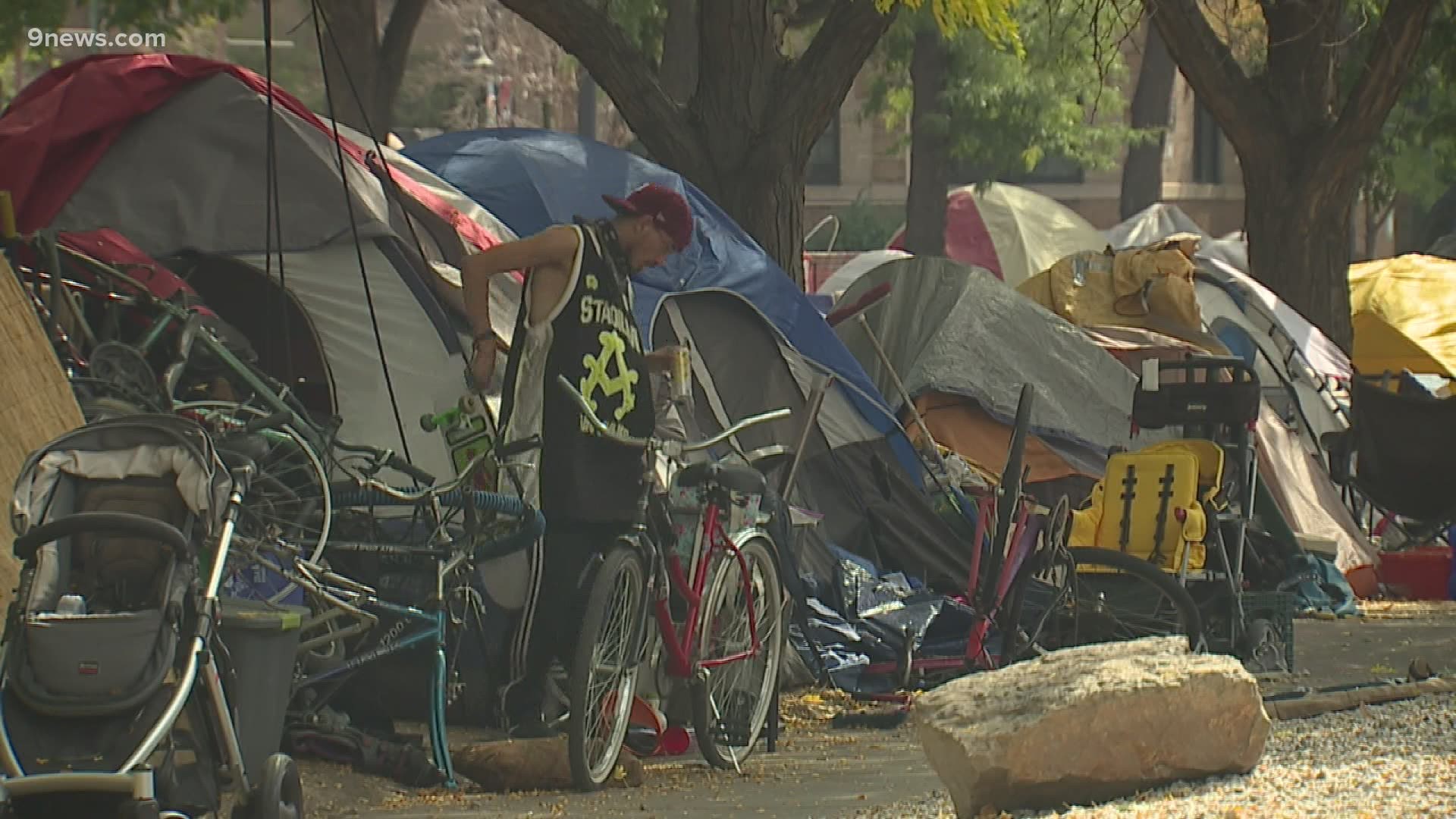 Several homeless advocates and people experiencing homelessness spoke at the announcement, which was made at a homeless camp located at 14th Avenue and Logan Street in the Capitol Hill neighborhood. They discussed their struggles finding new homes when encampments are moved, and called on local leaders to help find a more permanent solution.

Health officials have said in the past that homeless camp sweeps are necessary to remove things like trash, human refuse, used syringes, rat infestations and more, something they have said is critical for public health and safety.

Luby said the cleanup this week is scheduled to proceed.

Denver Homeless Out Loud has previously called for the city to end the sweeps unless they offer housing or land for the camp residents to relocate.

Homeless Out Loud said this will be the fourth homeless camp that the city has swept in the last three weeks.

"Despite agreeing to stop taking our homeless neighbors' property without notice, and trashing it, in the Lyall settlement agreement, Denver continues to flagrantly violate that agreement and the Constitution. That the failure to give any notice whatsoever was purposeful, and done to prevent those who disagree with the sweeps from showing up to voice their displeasure, is even more shocking. And, the fact that these sweeps continue during a global pandemic, when President Trump's CDC has specifically said that the sweeps are dangerous not only to homeless individuals, but the community as a whole, is unconscionable. Public health experts agree that the sweeps contribute to community spread of COVID-19. Despite this, Mayor Hancock continues to ignore the science and order the sweeps. The sweeps are inhumane and must end. To take away our homeless neighbors' only possessions, during a global pandemic, is cruel. Today, we say 'enough is enough.'"