Masks will be required when a total of 5,700 fans, mostly season ticket holders, will be allowed to attend the Sept. 27 Broncos game. 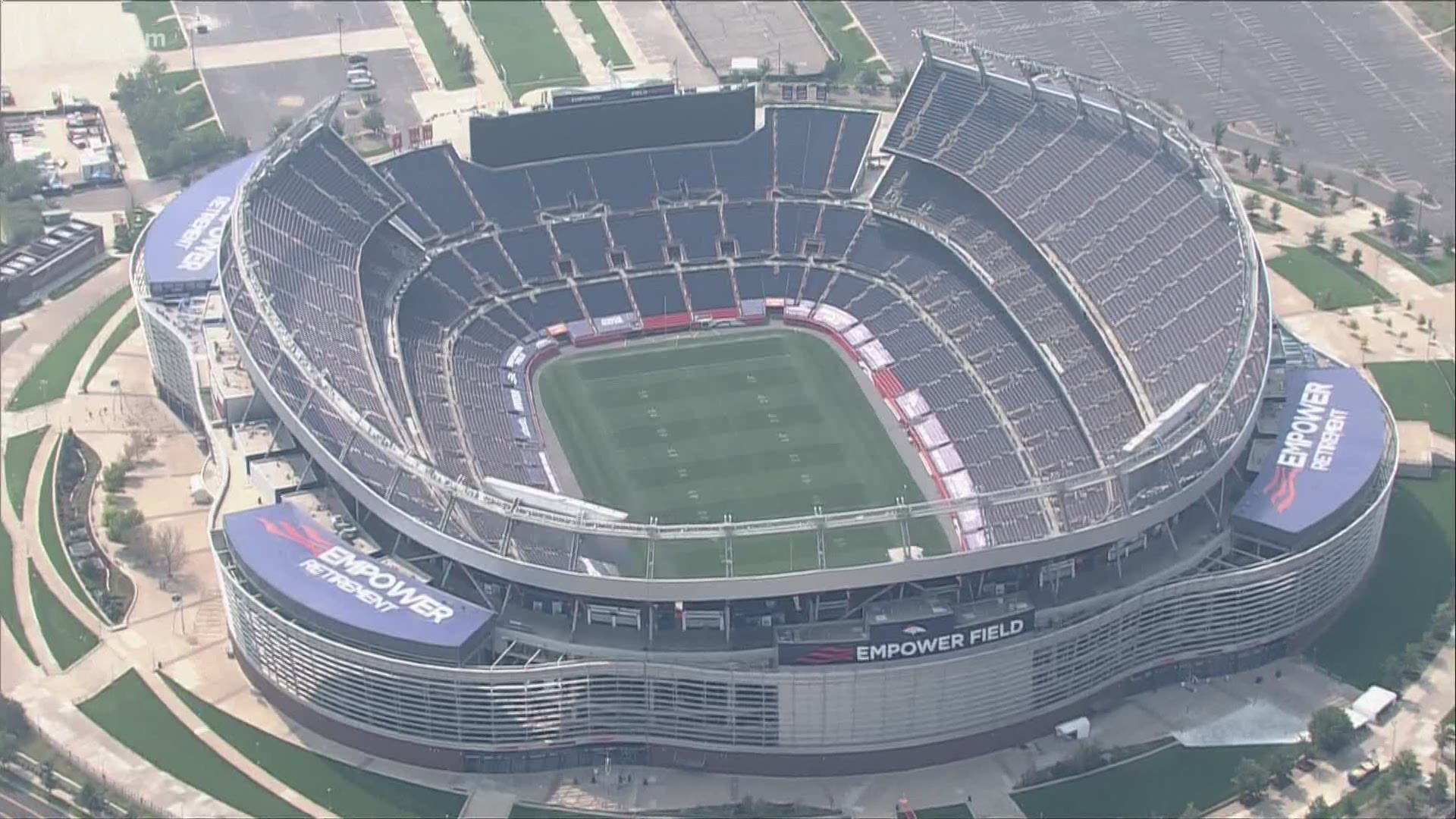 DENVER — Gov. Jared Polis (D-Colorado) and the Denver Broncos announced Tuesday that 5,700 fans will be allowed to attend the week three Broncos game against Tom Brady and the Tampa Bay Buccaneers on Sept. 27.

Fans will be required to wear masks and practice social distancing and will be seated in "pods" of 175 people or less to allow for easier contact tracing should someone test positive for the coronavirus, the governor announced.

According to Bowlen, fans in those pods will be asked to use specific entrances and the concessions and restrooms that are closest to them. She also noted that those two areas are now completely touchless as well as cashless.

Most of the fans will be season ticket holders, but some tickets will be sold as half-price which is something that team has done historically and still intends to honor, Bowlen said.

RELATED: Even with no fans for opener, Broncos home sellout streak continues — here's why

"Season ticket members will be entered into a lottery. It will be based on their priority number or weighted by their priority number," Bowlen said. "They will receive a time slot where they can on to Ticketmaster and purchase tickets. If they chose not to purchase tickets, there's nothing else they have to do at this time and it will move on the next season ticket holder in the queue."

Bowlen is the chair of the  Broncos’ COVID-19 task force, and she submitted an extensive stadium safety plan to the governor’s office, which she said Tuesday has been in the works for about three months.

That variance has not yet been posted to the CDPHE website.

The Broncos have sold out all their home games since 1970. Although the team had sold out for their entire 2020 home season, two preseason games games were cancelled and no fans will be allowed in at their season opener Monday night, Sept. 14 against the Tennessee Titans at Empower Field at Mile High.

RELATED: How many fans will be allowed to attend Denver Broncos games?

RELATED: Broncos will have some fans in stands Week 3 against Tampa Bay

The current rules allow for a limit of 175 people at outdoor events, but organizations can apply for variances to allow for more. Polis said Tuesday that it's helpful to think of the games as a series of small gatherings instead of one large gathering.

"Rather than one gathering of 5,700 people, this is really a series of distinct gatherings of 175 people each," Polis said. "It's consistent with the guidelines across the state. It's no greater risk profile than having 10 or 15 other events, all of which are up to 175 in different parts of our state. And there are hundreds, if not thousands, of events that occur every week across the vast, diverse state of Colorado."

When asked if there was favoritism shown to the Broncos and how it compares to events being held at the Bandimere Speedway, Polis said the same guidelines applied.

"Well the Broncos are beloved, but frankly they're playing by the same rules as any other large event," he said. "That provides a framework for any other types of larger events that want to have cohorted groups of 175 with distinct entry points and operational distinction between them. And we encourage everyone, including the speedway, and others that want to have large events to really find a way to do that safely."

Right-wing activist Michelle Malkin posted a photo after the rally claiming that 5,500 people attended. Per health orders, Bandimere cannot host more than 175 people, unless they're divided into smaller gatherings and social distancing protocols are put in place.

The speedway filed a lawsuit against Polis and state health officials where they challenged various health orders as unconstitutional.

Multiple other NFL teams do have plans for fans in the stands, including the Kansas City Chiefs, who will have 16,000 people in attendance during their Sept. 10 home opener.