Brandon Pope claims in a federal lawsuit that the Colorado Springs Republican "did not care" if staff members got COVID-19. 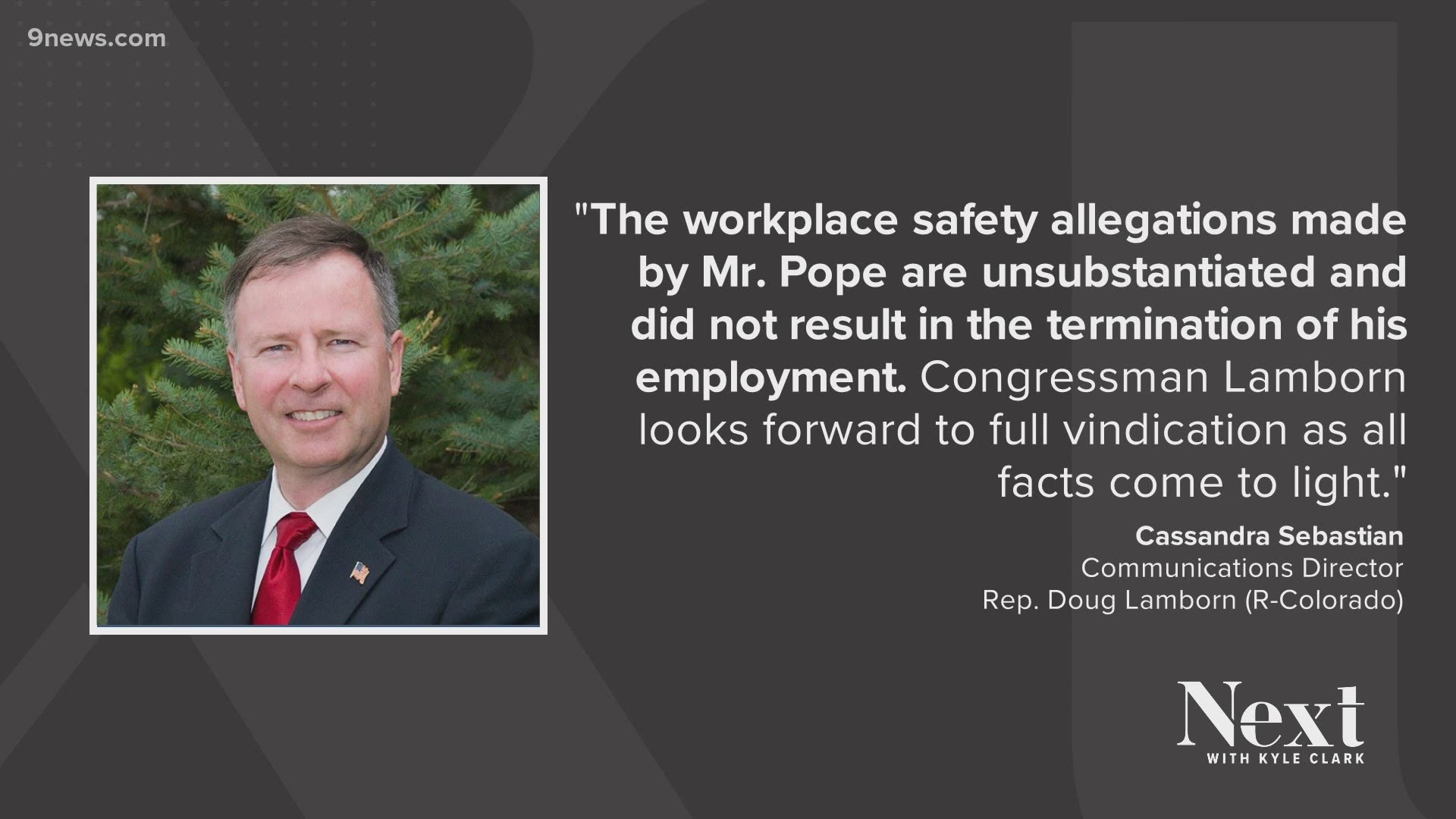 COLORADO SPRINGS, Colo. — A former employee has filed a federal lawsuit against Colorado Congressman Doug Lamborn (R-Colorado Springs) alleging that the lawmaker "didn't care" if staff members got COVID-19 and eventually fired him after his continued pushback about the Congressman's lax attitude about the virus.

The civil lawsuit was filed in federal court on Thursday by Brandon Pope, who claims in the suit that Lamborn had "a reckless and dangerous approach to COVID-19" and retaliated against him when he sought "to protect employees from unsafe conditions in the workplace."

In the March and April 2020 timeframe, the lawsuit says, the District Office staff had meetings with Lamborn and his wife, during which they both claimed that COVID "was a hoax" and asserted that "the pandemic was being used to alter the course of the congressional and presidential elections."

At the time, the lawsuit says, Pope learned about concerns from other coworkers who were high risk and advocated for additional safety protocols. According to the suit, Pope's concerns were disregarded or minimized.

The suit also claims that Lamborn "refused to implement or follow reasonable and responsible COVID-19 protocols," even after he and other staff members were infected with COVID-19 in the fall. As result, the lawsuit says, there was "widespread transmission" of the virus.

Back in November, when Lamborn tested positive, his office released a statement saying he was following all CDC guidelines and isolating at his home in Colorado Springs.

However, the lawsuit claims, that after testing positive, Lamborn told a staffer he “did not care” if his employees got infected and that he was not going to wear a mask or isolate himself.

The lawsuit alleges that on Nov. 18, shortly after a meeting that both Pope and Lamborn attended, Pope found out second-hand that Lamborn and two other staffers who had participated in that meeting were positive for COVID-19.

The next day, Pope also tested positive, and the lawsuit alleges that Lamborn was the "direct or indirect" cause of his infection.

Pope was terminated on Dec. 7, 2020. The lawsuit claims he was fired because he opposed "their reckless approach" to COVID-19 and their refusal to implement common-sense protective measures.

When asked, the communications director for Lamborn refused to specify why Pope was fired and said the allegations in the lawsuit are "unsubstantiated."

The lawsuit also claims that Lamborn "consistently disregarded ethical rules."  According to the suit, Lamborn "gave his son the necessary access to live in a storage area in the basement of the U.S. Capitol" for several weeks while his son was relocating to Washington.

9NEWS attempted to reach Lamborn by phone but was told he's in Washington. His office released the following statement but had no further comment.

“The workplace safety allegations made by Mr. Pope are unsubstantiated and did not result in the termination of his employment. Congressman Lamborn looks forward to full vindication as all facts come to light," Cassandra Sebastian the communications director for Lamborn said in a statement.