This is part of a series of statewide ballot reviews called "We Don't Have To Agree, But Let's Just Vote." Today we look at Prop. 114, about gray wolves. 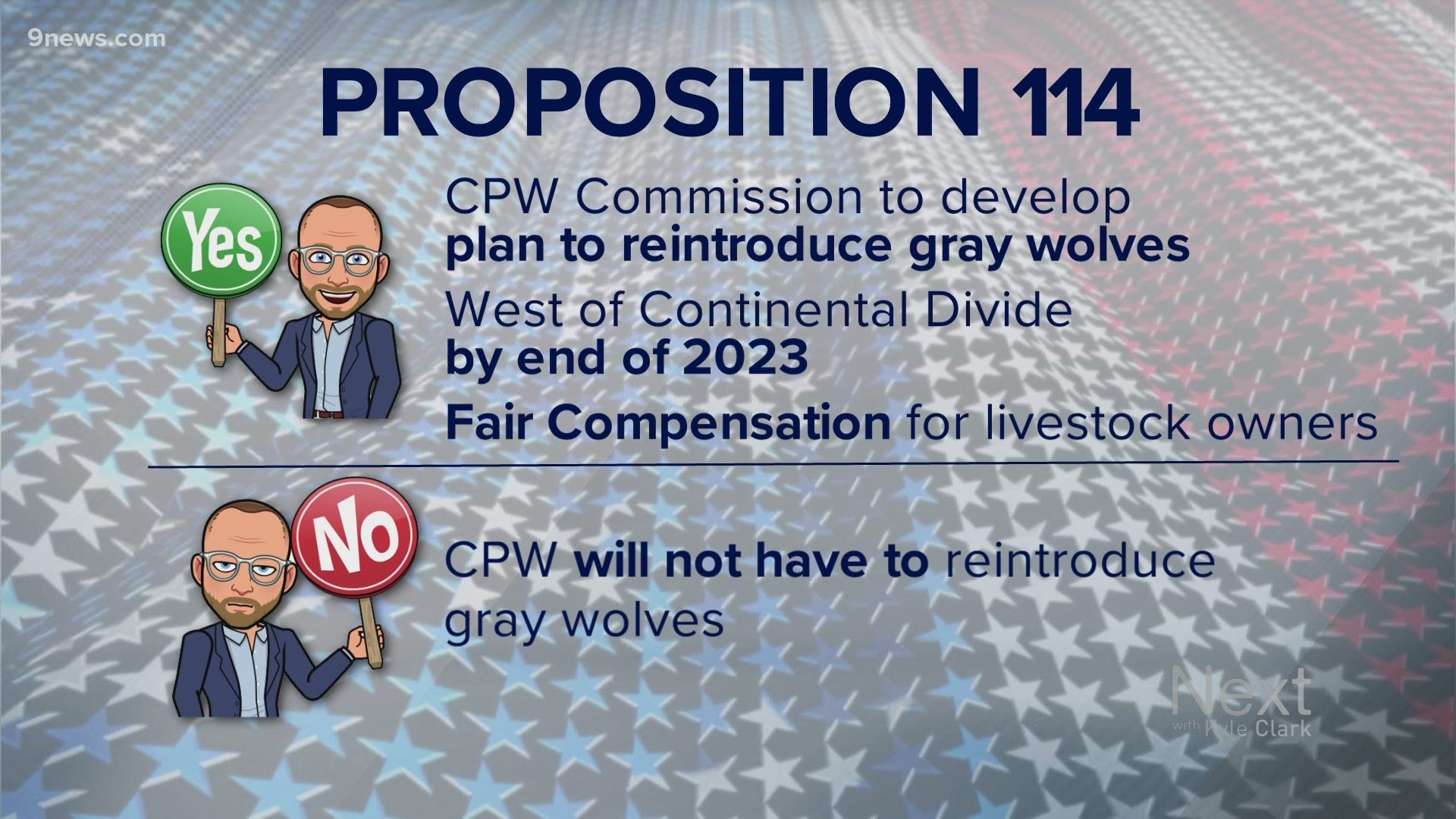 COLORADO, USA — This story is part of a series of statewide ballot issue reviews for Next: We Don't Have To Agree, But Let's Just Vote.

Proposition 114 is summarized on your ballot, but the extent of the potential new state statute is spelled out in the back of your Blue Book. Even in those two pages, it doesn't include all the information you may want to know before selecting "yes" or "no."

A YES vote means you want the Colorado Parks and Wildlife (CPW) Commission to develop a plan to reintroduce gray wolves into areas west of the Continental Divide by the end of 2023.

CPW would be required to hold statewide hearings to develop that plan.

The new state law would also require CPW to provide fair compensation to owners of livestock for any losses caused by gray wolves.

A NO vote means CPW would not have to reintroduce gray wolves.

The U.S. Fish and Wildlife Service still considered the gray wolf (Canis lupus) as endangered, so any reintroduction would require federal approval. If the gray wolf is removed from the endangered list, then Colorado can move forward on its own.

Earlier this year, after enough signatures were submitted to qualify the issue for the ballot, video from Moffat County appeared to show two gray wolves in northwest Colorado.

Rocky Mountain Wolf Action Fund, the group that put Proposition 114 on the ballot, argues that bringing back gray wolves can help reduce the elk and deer population, which in turn could restore grass and vegetation, which could have other potentially positive effects on the environment.

One argument against revolves around money.

In 2016, the CPW Commission voted against reintroducing gray wolves and, in a memo explained why. Part of the reason included money.

"Without additional funding, or reductions in existing programs to compensate for the increased expense, efforts to actively release wolves into the state are not possible. No wolf advocacy group has stepped forward and offered to fund a wolf management program," the commission wrote.

Why would they need money?

Fair compensation is not explained in the Blue Book summary nor the text of the law that would be created that's printed in the back of Blue Book.

The definition of livestock is included in the text of the law.

Regarding fair compensation, the law in the back of the Blue Book references current state statute 33-3-107.

That statute explains the claim procedure a livestock owner must take.

"When any person has sustained damages to property caused by any wildlife, he shall notify the division of such damages within ten days after the discovery thereof," the statute reads.

Long story, short, the livestock owner submits a claim, then CPW either reaches an agreement and settles, or the claim ends up in front of the commission.

The amount of money would be case-by-case.

There are two groups opposing Proposition 114.

Stop the Wolf PAC (political action committee) has received $87,000. About 200 have come from small donors.

Coloradans Protecting Wildlife is the other committee opposing Proposition 114.