The curfew has been extended another four nights, from 9 p.m. to 5 a.m. through Friday morning, amid ongoing nighttime riots. 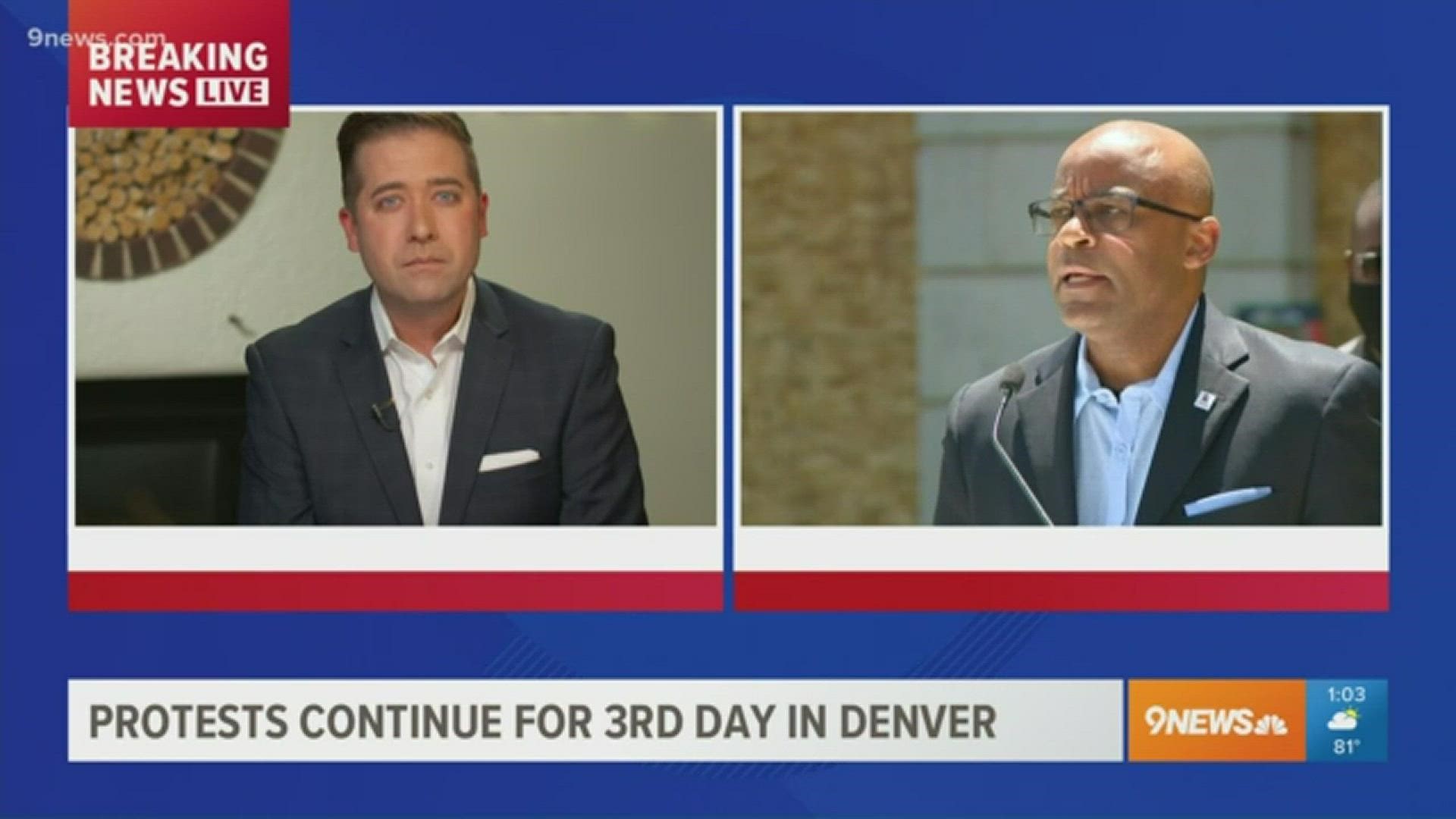 DENVER — As nighttime rioting continues in downtown Denver, Mayor Michael Hancock extended the curfew for the city and county for another four nights, through Friday morning.

The curfew originally was in effect from 8 p.m. to 5 a.m. Saturday night through Monday morning.

The extension goes from 9 p.m to 5 a.m. Monday night through Friday morning, according to a spokesperson for Hancock.

There is an exception to the curfew for law enforcement officers, firefighters, medical personnel, the Colorado National Guard, members of the media, anyone traveling to or from work or the airport, anyone fleeing danger, those experiencing homelessness and those who need immediate medical care.

The curfew applies to anyone on foot or in a vehicle in any space accessible to the public in the City and County of Denver, and Denver Police Department (DPD) said officers will be enforcing it.

"Once 8 p.m. hits, our message is very simple: 'Go home,'" Hancock said on Saturday. "If you are planning on come downtown tonight, stay home."

RELATED: Protesters face off with police Sunday night despite 8 p.m. curfew on day 4 of protests over George Floyd's death

Peaceful protests began Thursday in Denver as a statement against police brutality after a video shared widely on social media showed a Minneapolis police officer kneeling on the neck of George Floyd while he was heard saying, “I can’t breathe.”

Bronson said punishment for violating curfew could be a fine of up to $999 dollars and/or imprisonment of up to 300 days in jail.

The Denver Emergency Operations Center has been activated to monitor and support the public safety response to the demonstrations.

Other local law enforcement agencies are deploying resources to assist the city, and Gov. Jared Polis deployed the National Guard as well, according to Hancock.

An emergency declaration allowed the city to devote additional resources to its response to the protests, Hancock said.

On Saturday, Hancock praised three separate demonstrations that took place on Friday and concluded without any violence, and took aim at "a few agitators" who he said were hijacking the peaceful demonstrations.

Hancock and DPD Chief Paul Pazen emphasized that it was a few agitators who were inciting violence with homemade explosives, rocks, bottles, graffiti and vandalism.

Pazen asked peaceful protesters not to tolerate any agitators, and asked them to weed out anyone trying to incite violence; "We are asking the good to help weed out the bad."

DPD identified 13 people arrested during Thursday's violent protests, and said 19 more were arrested on Friday who likely won't be identified until Monday.

Another 170 people were arrested Sunday on similar charges to the night before.

That makes for a total of 284 arrests by DPD from the protests since Thursday night. The names and charges of most of the suspects won't be released until Monday at the earliest, according to a DPD spokesperson.

Hancock has said the city's officers used "restraint" in response to the protesters. He held a news conference Friday afternoon calling for protests to be peaceful. He also condemned Floyd's death.

As people in Denver protested George Floyd's death for a second day, Hancock said he considers the deaths of Marvin Booker, Michael Marshall and Jessie Hernandez - all officer-involved killings - to be murder.