Man at forefront of marijuana legalization in Colorado has died

Steve Fox, 53, was the lead drafter of Amendment 64, which Colorado voters passed in 2012. 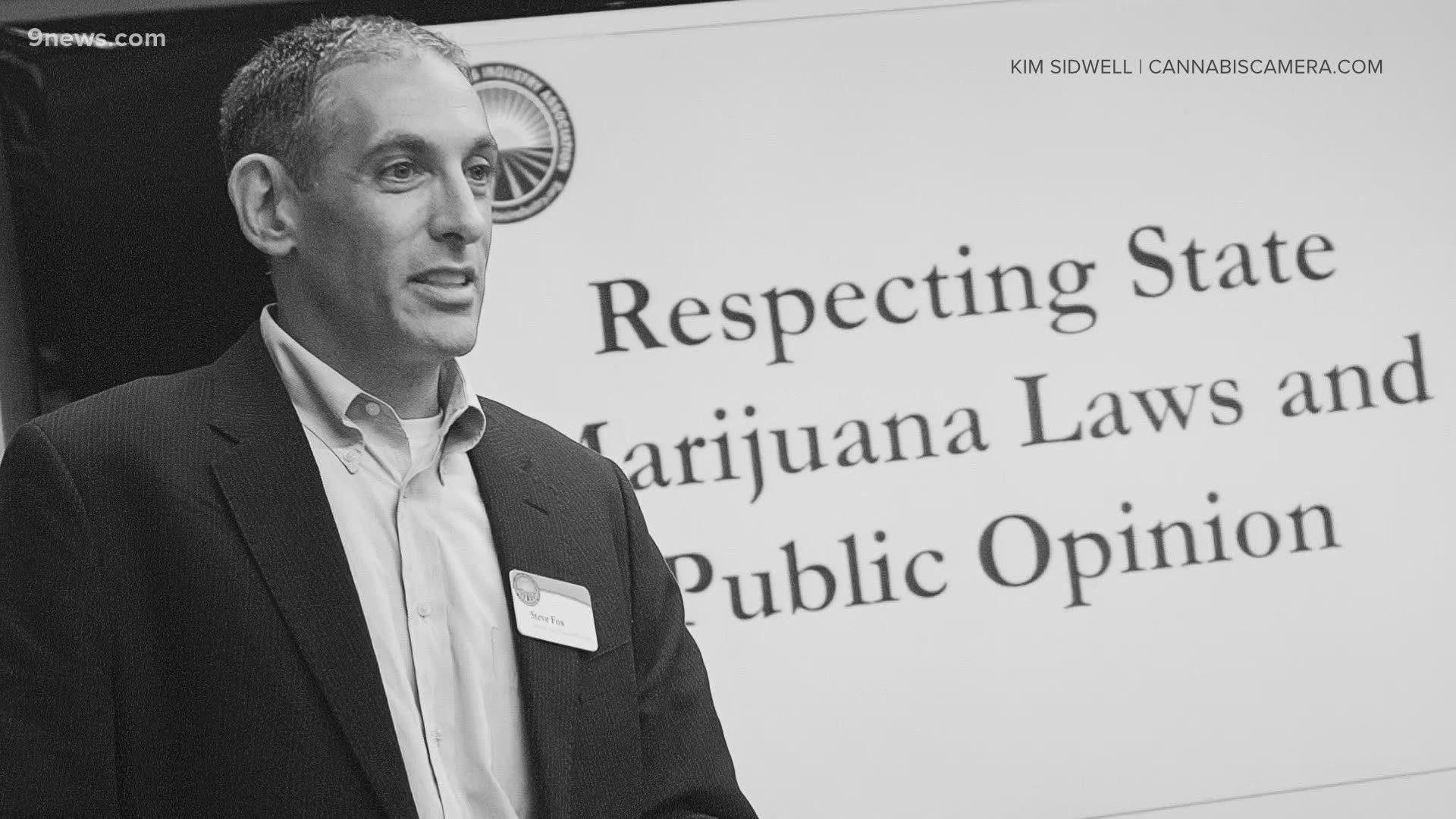 COLORADO, USA — The man at the forefront of marijuana legalization in Colorado has died.

Steve Fox, 53, was the lead drafter of Amendment 64, which Colorado voters passed in 2012.

He started his lobbying career as one of the first political professionals to become a marijuana advocate, and spent the rest of his professional life advocating for cannabis policy reform all over the country.

“Steve just wanted to have a positive effect on the world, and he saw that cannabis policy was a way to affect it in so many ways,” Mason Tvert, partner at VS Strategies, told 9NEWS.

Tvert worked at the cannabis-focused policy and public affairs consulting firm with Fox, who was a managing partner. The two also worked together on campaigning for Amendment 64.

“[Fox had an impact] not just on the hundreds of thousands of people who consume cannabis or the thousands of people who work in this industry, but on everyone who is now experiencing other benefits of this," he said. "Whether it’s the public health and safety benefits associated with regulation, whether it’s the tax revenue that’s helping to build schools … he knew that Colorado was a special place, Colorado could get this done, and it would lead to other places. And that’s exactly what happened.”

Tvert set up a GoFundMe page to support Fox’s wife and two children.

He also issued this statement on behalf of VS Strategies:

We are truly heartbroken to share news of the passing of our partner and dear friend Steve Fox. A message is below from Steve's partners and the entire family at VS Strategies and Vicente Sederberg LLP.

We welcome the celebration of Steve’s life through the sharing of thoughts and memories, and we ask for respect and privacy for his family, friends, and coworkers who are still reeling from this loss. We have also started a GoFundMe page to support Steve’s wife and daughters as they navigate their way through this extremely difficult time — http://bit.ly/steve-fox

With wisdom beyond his years and a pioneering spirit, Steve was an “old soul” with a knack for seeing things in a new light. He was strongly principled, deeply empathic, and fiercely kind. And despite his usually soft-spoken and lighthearted demeanor, his opinions rarely went unheard and always carried significant weight.

His passion for politics and policy were exceeded only by his passion for people — his family, friends, and colleagues, as well as the multitude of strangers that he knew were being affected every day by politics and policy. He had a burning desire and uncanny ability to envision and effect positive change, both societally and in those closest to him. He was not just a remarkable human being, but a truly transformational leader.

Steve was always the first to volunteer and the last to seek credit. He was beyond generous with his time and patience, and perpetually understanding. He relished opportunities to provide counsel and guidance, and the feeling was mutual for those who received it. He was warmly regarded as a mentor by no fewer than a dozen current and former members of our firm, including all seven of us.

Steve was one of the first political professionals to enter the marijuana advocacy space. At a time when cannabis policy was just a blip on the political radar and most savvy up-and-comers were unwilling to dip a toe into the space, Steve dove in headfirst. While many viewed it as a losing cause that wasn’t worth the fight, he saw it as a cause worth fighting until it was won. And in working to legalize and regulate cannabis for medical and adult use, he found a way to fight simultaneously for several of his core values: To promote justice and compassion, to advance freedom and liberty, and to nurture and inspire the human spirit. Humbly righteous, judiciously aggressive, and relentlessly ethical, he was committed to doing the right thing, doing it the right way, and doing whatever it takes to get it done.

When he joined the Marijuana Policy Project in 2002, Steve was the only full-time cannabis lobbyist on Capitol Hill. He would remain at the forefront of the cannabis policy reform movement for nearly two decades, playing pivotal roles in several major victories at the federal and state levels.

Steve was a lead drafter of Colorado’s historic Amendment 64, which legalized cannabis for adult use, and he managed all aspects of the successful campaign behind its passage and implementation. He also conceptualized and co-founded Safer Alternative For Enjoyable Recreation (SAFER), which laid a lot of groundwork for the legalization effort and contributed to a seismic shift in the U.S. cannabis policy debate. In 2009, he co-authored the book “Marijuana Is Safer: So why are we driving people to drink?,” which is based on the SAFER strategy.

Steve was always thinking at least one step ahead of the rest. Long before cannabis was legalized, he envisioned a legal, organized, and responsible cannabis industry. He played leading roles in conceptualizing and establishing several of the nation’s largest and most influential cannabis trade organizations, including the National Cannabis Industry Association, the Cannabis Trade Federation, and the U.S. Cannabis Council. He regularly led working group meetings and calls, and he was a frequent speaker at cannabis conferences.

Steve’s role in cannabis community cannot be overstated. He was a trailblazer in the movement to end prohibition, and he was an architect and caretaker of the legal industry that is quickly replacing it. He beat the path, built the shelter, and worked tirelessly to make it as welcoming, accessible and beneficial as possible. He always put the mission — the wellbeing of others and the betterment of society — ahead of himself.

No one was more reluctant to sing their own praises while being so deserving of a louder refrain.

In 2013, Steve received a highly esteemed award from the Drug Policy Alliance in recognition of his long-term spearheading of the Colorado legalization effort. With an audience of hundreds and the spotlight squarely on him, he used the better part of his brief acceptance speech to give recognition to the people and organizations who had supported and worked alongside him. He reserved only the final thought for his own personal message and dedication. It was to his parents, for raising him to believe in the Jewish philosophy “Tikkun olam” — to “repair or heal the world” through beneficial and constructive acts. That is what drove Steve to take on the cause of cannabis policy reform. And it was what drove Steve to be the person he was.

And the entire VSS and VS family.