Anderson's announcement comes after new allegations were made against him during testimony before the state legislature last week. 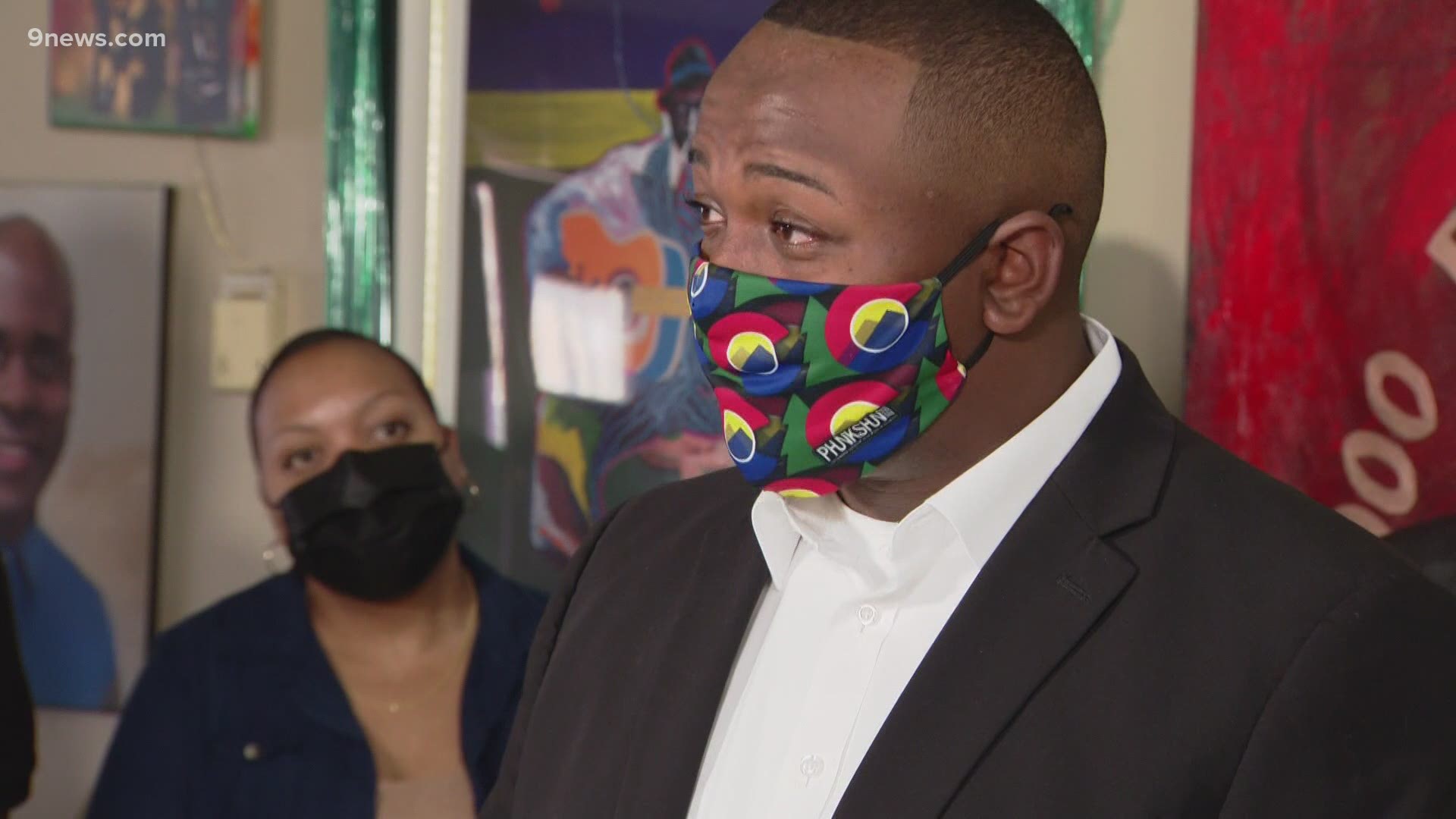 DENVER — Denver Public Schools (DPS) board member Tay Anderson has announced he will be stepping back from his board duties after new allegations of sexual assault were brought against him last week, saying he wants to protect his family and avoid being a distraction for the district.

In a statement released via Twitter Sunday night, Anderson said, "These unsubstantiated false allegations have caused a great deal of trauma to our entire district."

"These false claims have put my family and I in harm's way and now as a father and son I must protect those I love first, therefore I will be stepping back from everyday board functions until the completion of the independent investigation," the statement reads.

He told 9NEWS he will participate in the board's vote to hire a new superintendent this week, as he is legally obligated to do so.

Anderson's decision comes in response to allegations of sexual assault made by someone testifying before the Colorado legislature on May 25 that 9NEWS has not corroborated.

A Denver Police Department (DPD) spokesperson said police have been in contact with the person who made the allegations, but have not heard from any victims. Any victims are encouraged to contact DPD, the spokesperson said.

RELATED: DPS Board of Education launches third-party investigation into claims against Tay Anderson

DPS launched a third-party investigation in April after the community organization Black Lives Matter 5280 (BLM5280) said that in late February, a woman came forward to them alleging that Anderson "is the perpetrator of her sexual assault."

Following last week's claims before the legislature, Anderson's attorney Christopher Decker released a statement saying "no law enforcement agency, no government agency, or even private individual has reached out to Director Anderson with specifics of any of these claims."

"The truth will be revealed," Decker said, "and Director Anderson will be cleared of these poisonous and false claims."

Director Tay Anderson’s fellow DPS Board members agree with his decision to step back from routine board functions and events until the conclusion of the investigation authorized by the Board on April 6. Director Anderson will continue to vote on necessary matters before the Board including the hiring of a new superintendent.

The Board encourages anyone with relevant information to reach out to the Investigations Law Group at interviews@ilgdenver.com.  It is critically important that all individuals feel safe and supported to participate in this process, and the Board will use any and all authority it has to protect those who participate. Retaliation or intimidation of witnesses will not be tolerated and the district will report any witness intimidation or harassment to the police.

We seek the truth and are committed to a fair and thorough process for all currently involved and anyone who is considering whether they should step forward.

Anderson's attorney released a longer statement about the allegations on Monday:

“Director Anderson categorically denies the most recent allegations which have been made against him. He looks forward to defending himself from these false claims just as soon as they emerge from anonymity into the light of fair investigation. To date, not a single allegation against Director Anderson has provided any time, place, individual, or details to which he can even respond. When and if this occurs, he will respond with specifics and corroborating evidence.

To date, no law enforcement agency or government agency has reached out to Director Anderson with any specifics of any of these claims. To the extent that Ms. Mary-Katherine Brooks Fleming has publicly stated that 62 victims have come to her claiming abuse ranging from unwanted touching to violent rapes, Director Anderson specifically denies any unlawful touching or assaults during his brief time as a teacher and since his election to the DPS Board. These acts never happened. Not a single child, parent, therapist, teacher, police officer, doctor, or individual has come forth to substantiated these incredible assertions.

Director Anderson implores DPS counsel to respond immediately to Ms. Brooks Flemings allegations that DPS staff and legal counsel herself engaged in a criminal coverup to include the use of nondisclosure agreements to silence dozens of victims who are current DPS students. Director Anderson has no knowledge of, or participation in, such a vile claim of silencing child sexual assault victims.

Finally, Director Anderson is saddened that so many have rushed to judgments about these inflammatory accusations. All he asks for is a fair, responsible, and thorough investigation. He knows this will exonerate him. He continues to cooperate with the private investigation initiated by DPS and will cooperate with any criminal investigation which may be underway.

As his attorney, I am particularly concerned that while absolutely no details or facts have been released regarding any of these claims, it appears that many have already presumed his guilt, vilified him, and ignored his significant contributions to the DPS community. All this before any specifics, details, charges or findings. I ask you to remember that we are a nation of laws and principles. These must not be eclipsed by unproved and anonymous allegations regardless of their number or nature.

The truth will be revealed and Director Anderson will be cleared of these poisonous and false claims.”