"We are not telling you how to vote," a copy of the letter sent to 9NEWS says. "We are just telling our tenants what we will do according to the results." 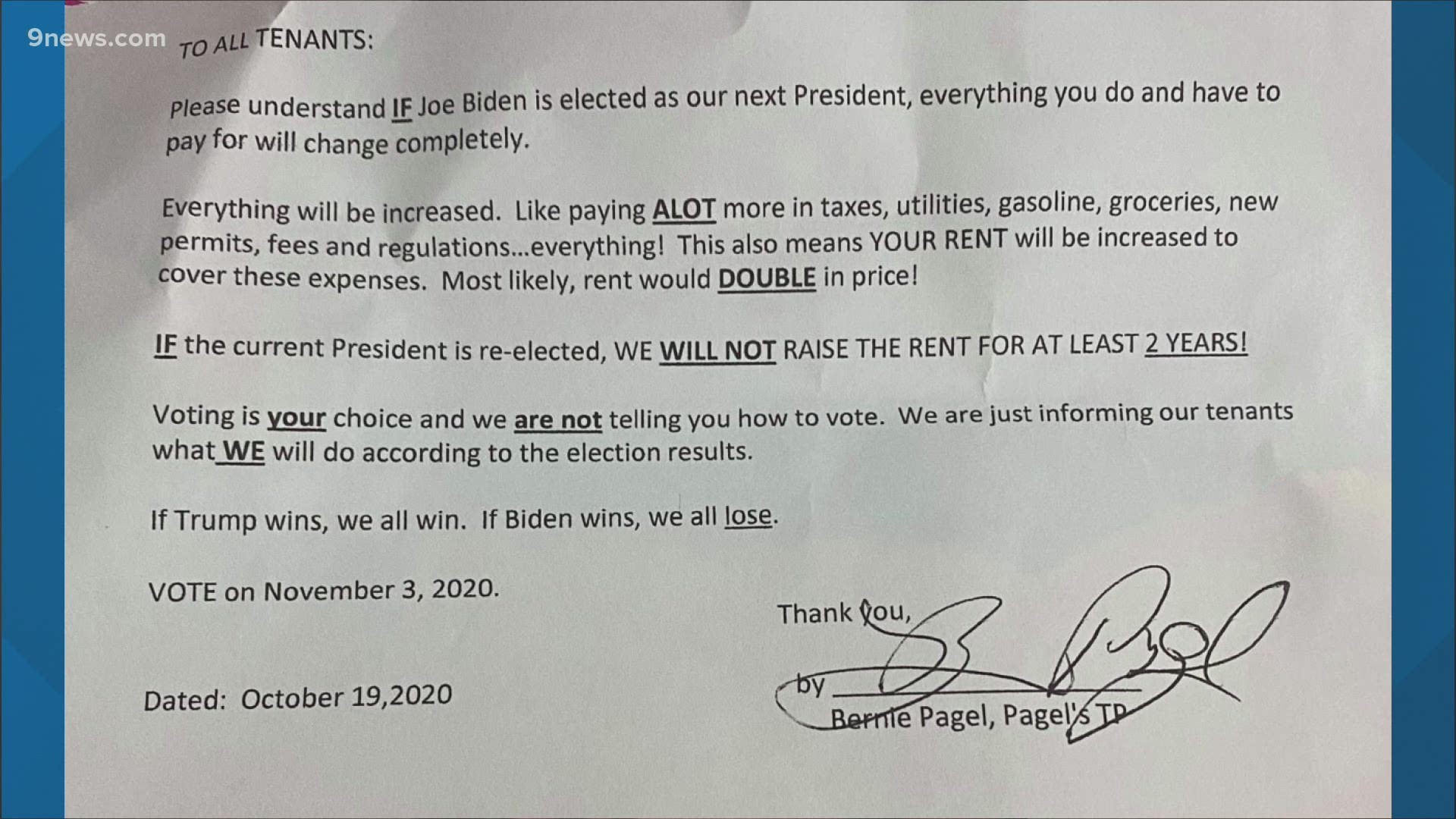 FORT MORGAN, Colo. — The landlord of a trailer park in Fort Morgan allegedly sent a note to residents warning rent would most likely double in price if Joe Biden becomes president.

9NEWS received several emails from Fort Morgan residents concerned about the legality of the letter, calling it a form of voter suppression.

The Colorado Secretary of State’s office confirmed they have received a complaint, and told 9NEWS they passed it along to the Attorney General.

According to several pictures of the letter sent to 9NEWS, it reads:

“TO ALL TENANTS:
Please understand IF Joe Biden is elected as our next President, everything you do and have to pay for will change completely.

Everything will be increased. Like paying ALOT (sic) more in taxes, utilities, gasoline, groceries, new permits, fees and regulations…everything! This also means YOUR RENT will be increased to cover these expenses. Most likely, rent would DOUBLE in price!

IF the current President is re-elected, WE WILL NOT RAISE THE RENT FOR AT LEAST 2 YEARS!

Voting is your choice and we are not telling you how to vote. We are just informing our tenants what WE will do according to the election results.

9NEWS reached out to the landlord multiple times for comment and has not heard back.

Marquez said she got the letter last night, although it was dated Oct. 19. She translated it to her Spanish-speaking parents and immediately called her neighbors.

“I mean everybody was pretty shocked, honestly,” Marquez said. “It was mainly hurtful, you know? How could someone say something like that or basically threaten us according to something that we can’t control?”

Marquez said her family has lived in the trailer park for 20 years, and they have never seen anything like this from landlords before.

They said they are concerned for themselves and their neighbors, because if rent doubles after the election in November, they may not be able to afford to stay.

“Our family lives paycheck to paycheck and right now we barely make things out with what we get,” she said.

9NEWS is waiting to hear back from the Attorney General on the status of their investigation.