The Keep America Great rally is one of several across the country over a period of a few weeks. The Colorado event starts at 5 p.m. at the Broadmoor World Arena.

Trump is campaigning for himself and for Gardner, as he promised the senator he would do ahead of the 2020 election. Trump lost Colorado to Democrat Hillary Clinton in 2016, and Gardner is considered vulnerable as his current term comes to a close.

Parking lot gates did not open to vehicles until 6 a.m. Thursday, but supporters had already started gathering outside of the arena on Wednesday afternoon despite the cold and snow.

"For people in Colorado -- I think conservatives especially are really excited and enthusiastic that he's actually coming back to Colorado [on Thursday] for the rally, and that's going to be a really special time for him to talk about his accomplishments, directly to how that impacts Colorado, as well," said Jenna Ellis, a former constitutional law professor from Colorado Christian University, who now works as Trump's senior legal advisor.

In an interview on Next with Kyle Clark, Ellis said Trump's campaign team considers Colorado to be a competitive state for the president, whose net approval rating is down about 11 points since the election.

"I think that conservatives in Colorado are really recognizing, when they hadn't before, how much it's so important to not only have the ground game here, but also on the national level, and we're seeing just widespread support throughout Colorado for the president," Ellis said.

The Broadmoor arena has a capacity of 8,099. There are 153,372 registered Republicans in El Paso County alone. People must have tickets, which are available on Trump’s website, to enter the event. Any supporters who did not secure a ticket can watch outside the arena on an outdoor screen, the Broadmoor said.

Doors opened at 1 p.m. at Gate B. The venue is encouraging people to carpool.

According to 9NEWS’ content partner Colorado Politics, Trump and Gardner will attend a private fundraiser earlier in the day. Colorado Politics reports tickets to that fundraiser cost $2,800 per person, with guests including the Republican National Committee Chairwoman Ronna McDaniel and the committee's finance chairman and Chicago Cubs co-owner Todd Rickets. 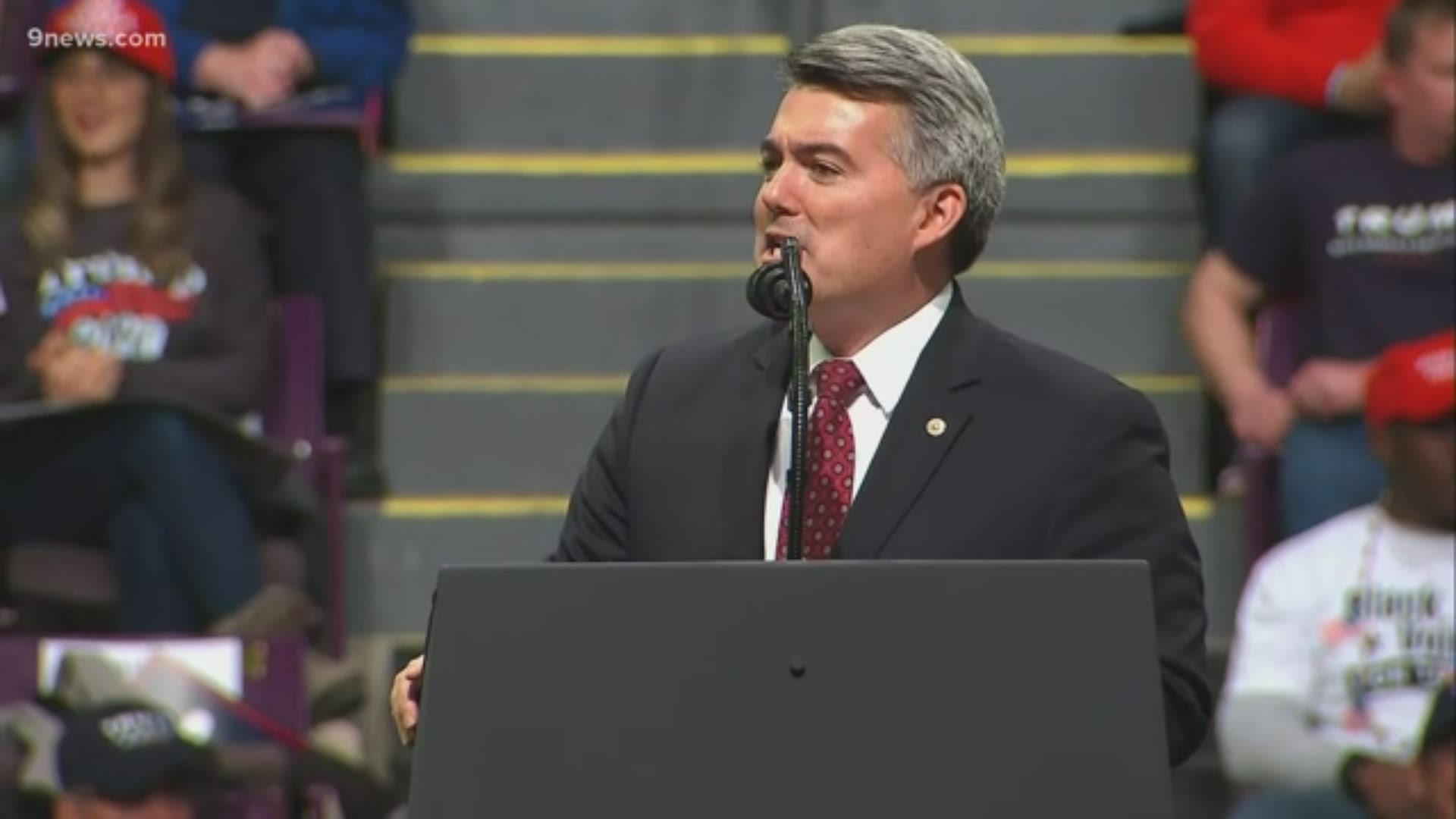 Trump isn’t the only 2020 presidential candidate in Colorado on Thursday. Democrats Amy Klobuchar and Tulsi Gabbard have events planned in the state, as well.

The Democrats are headed to Colorado from Las Vegas, where they debated on Wednesday night, and Trump is coming off another rally in Phoenix. As for Gardner, he spent the day before the rally at a student roundtable event in Centennial.

Democrats Bernie Sanders and Joe Biden held events in Colorado earlier in the week, and Elizabeth Warren and Pete Buttigieg will be here this upcoming weekend.

The last time the president visited Colorado was for the Air Force Academy graduation last May.

In the full interview, Kyle and Ellis discuss if the president can reach unaffiliated voters in Colorado, whether Trump ever doubted Gardner's support during the impeachment trial, and whether the president takes feedback from colleagues.