Dumpster fires, vandalism in Denver during 3rd night of protests

84 people were arrested as police dispersed the crowd, with most people clearing out less than two hours after the 8 p.m. curfew. 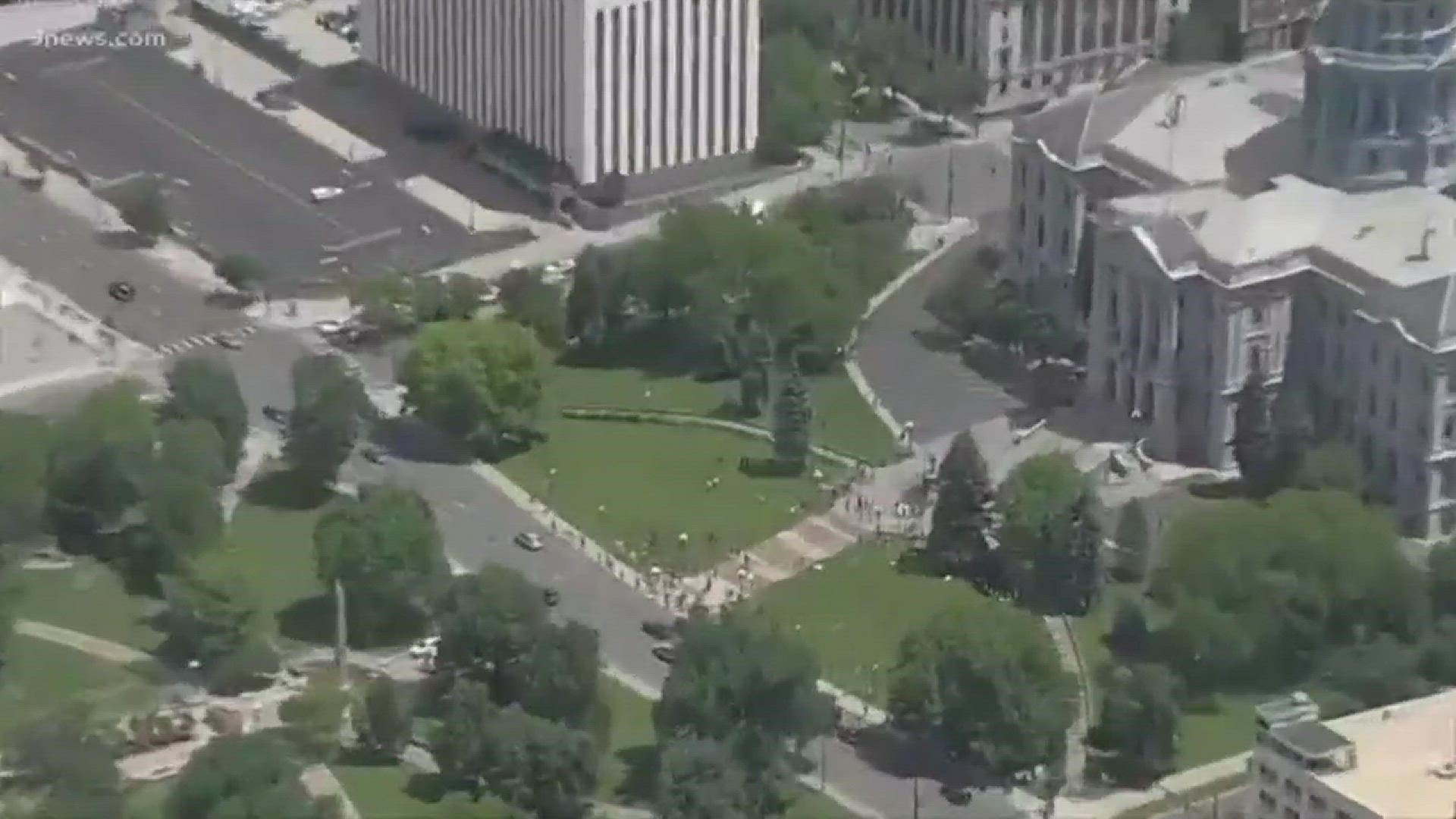 DENVER — Denver Police say 84 people were arrested Saturday night in downtown Denver, all except one being arrested after the city's 8 p.m. curfew went into effect.

Police largely gained control over the situation in downtown Denver less than two hours after a citywide 8 p.m. curfew went into effect following two prior nights of riots that included vandalism, fires and looting.

The riots followed peaceful protests during the day Thursday, Friday and Saturday in response to the in-custody death of George Floyd.

1 / 13
Elyse Avina
Protesters marched on Saturday, May 30, 2020 at the Colorado State Capitol in Denver in response to in-custody death of George Floyd.⁠

> Editor's note: The videos and images in this article may contain graphic content and language that some viewers may find disturbing. 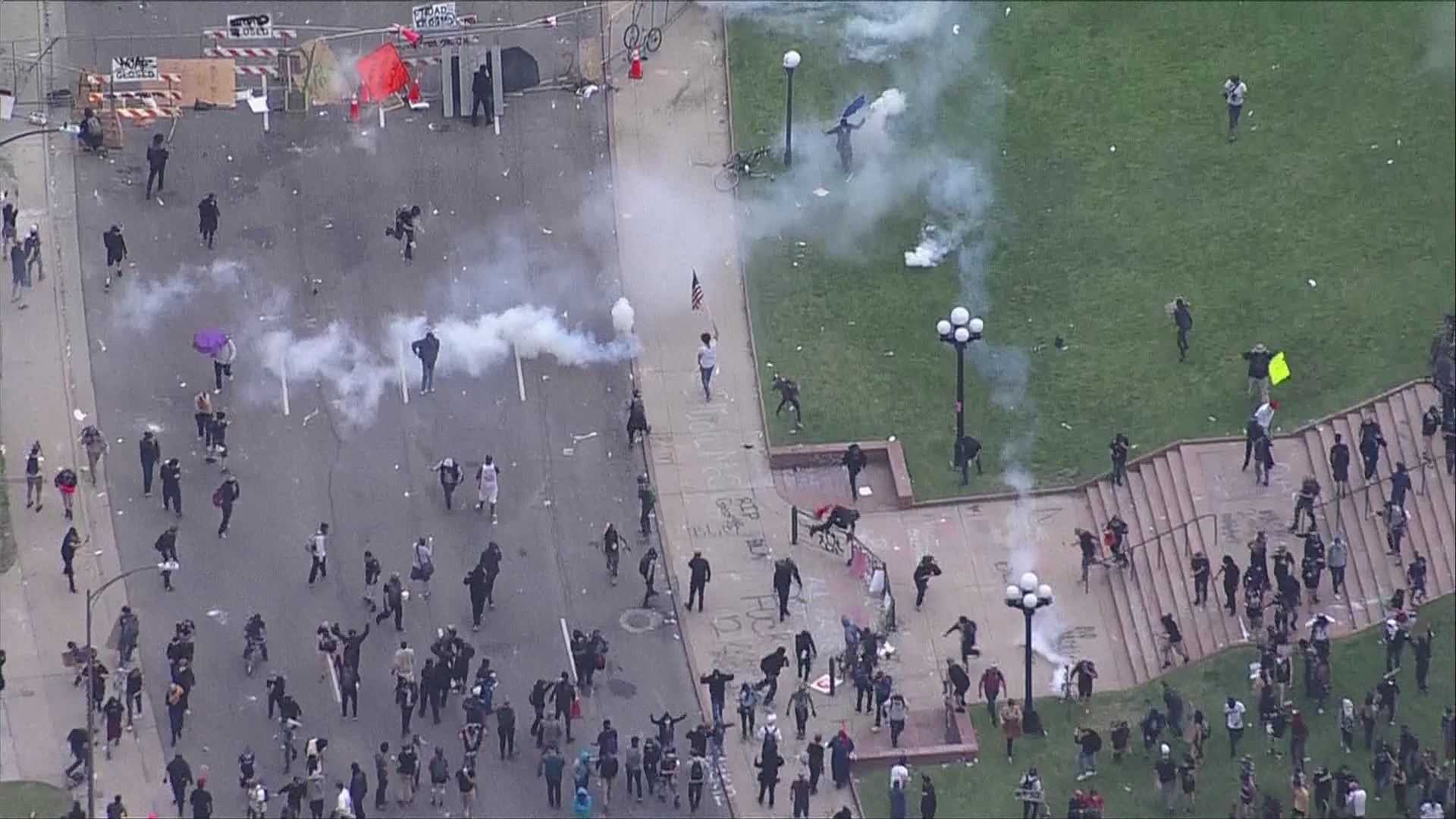 The video below shows protesters constructing the barricade. 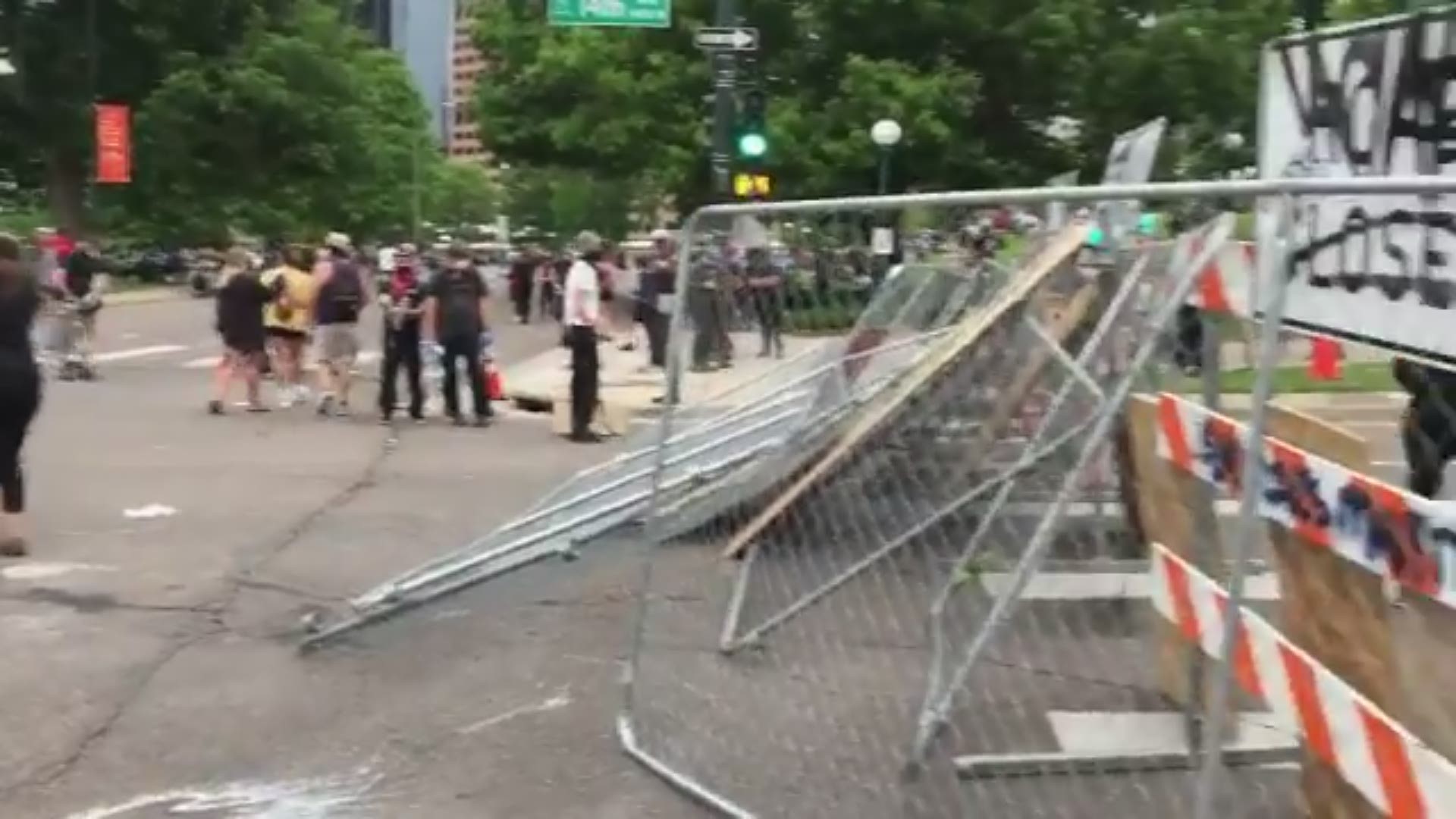 About 30-40 small fires ignited in dumpsters and on items like mattresses and trash piles starting shortly after 8:30 p.m. 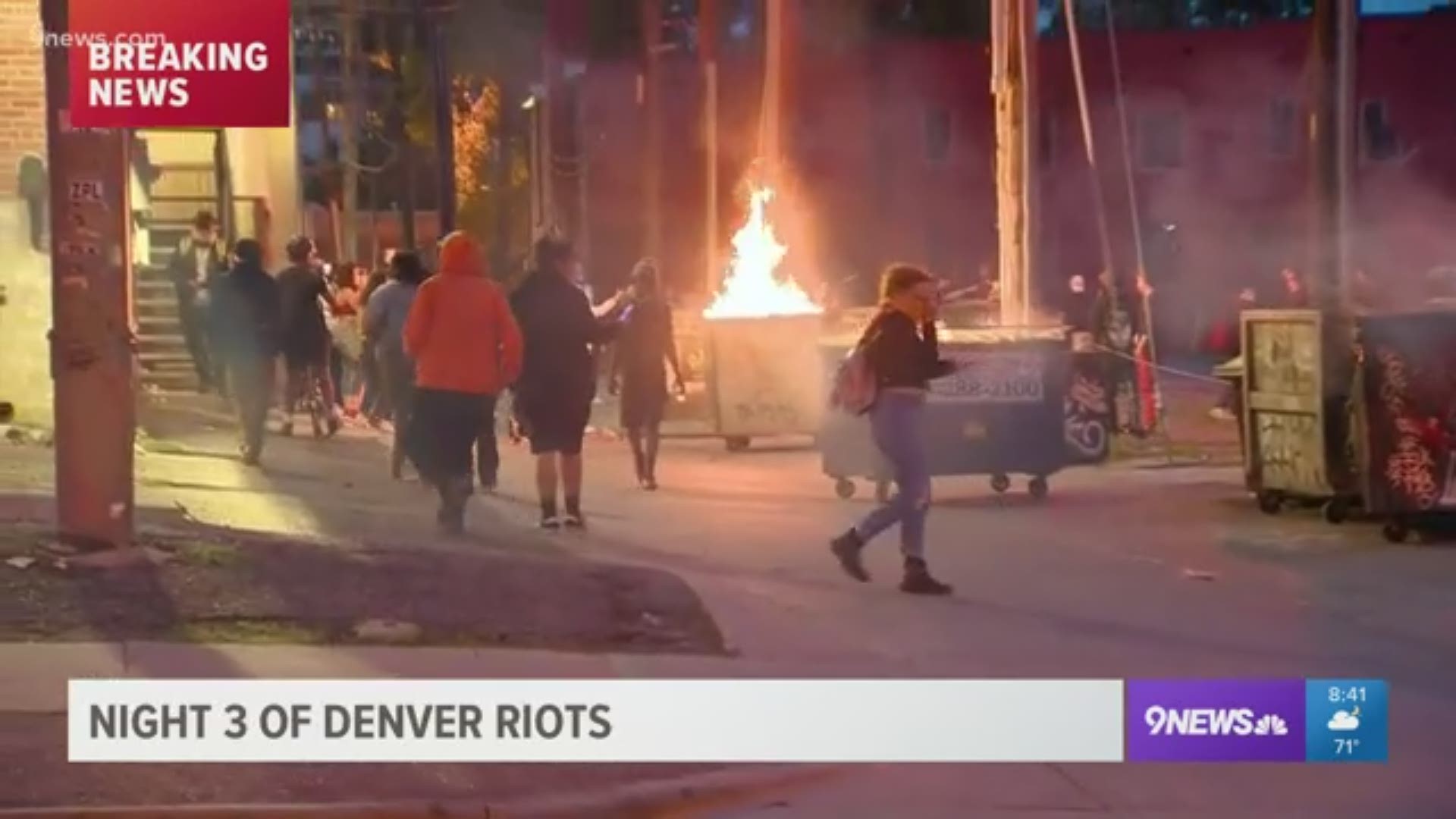 The fires were lit mostly in the area east of the Capitol building. 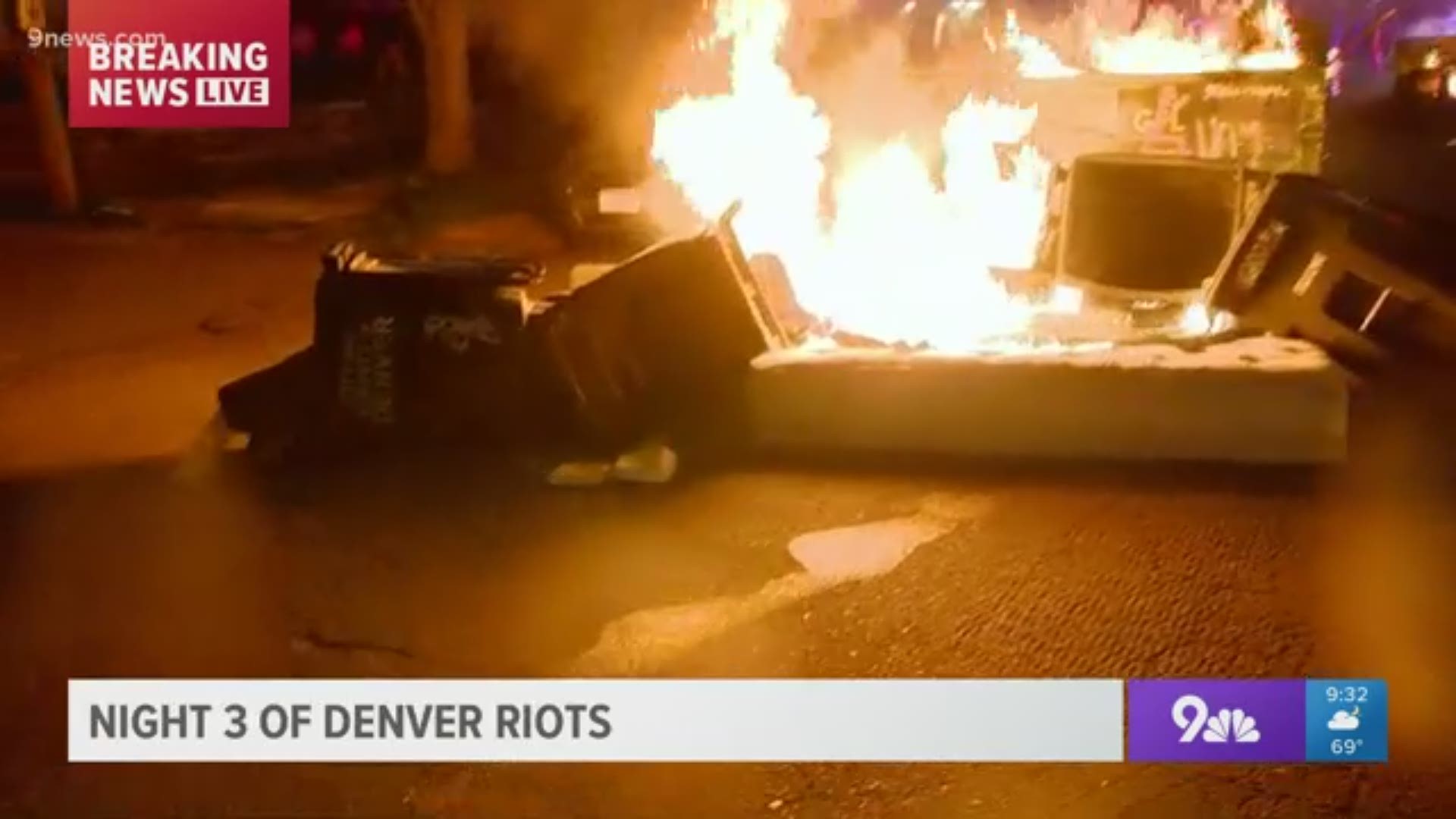 The area surrounding the Capitol cleared out at about 8:45 p.m.

People did remain along South Broadway for hours after the 8 p.m. city- and county-wide curfew went into effect on Saturday, something the mayor issued to try and curb the violence that went into its third night in Denver. 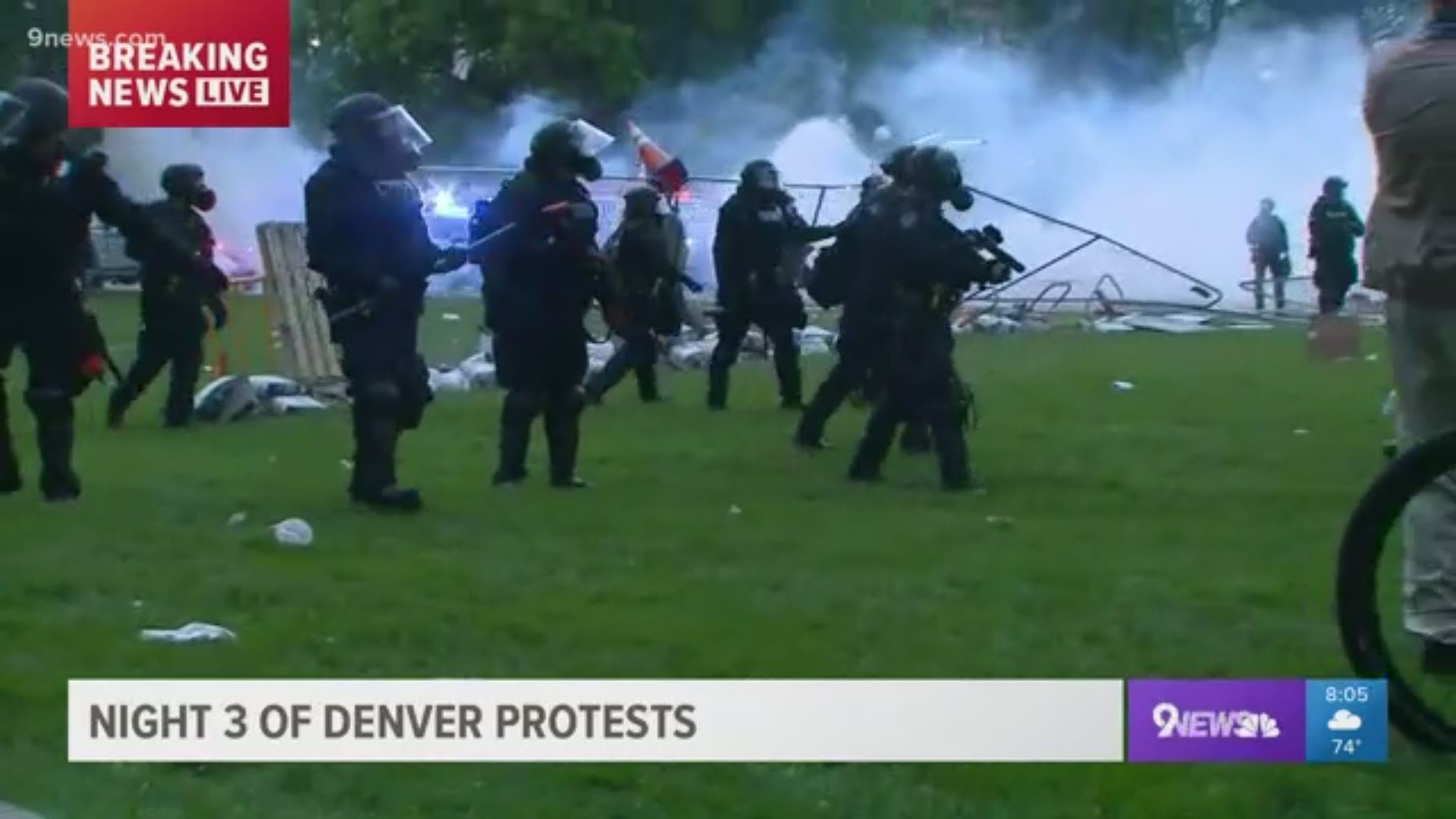 "Us peacefully protesting for many years...trying to make our voice heard...it really hasn't...done anything...[police] are still doing it,"one protester said. "So people...want to be violent and show...our peaceful protests are not working, so we gotta be rowdy and show you guys that we're enough — that enough is enough." 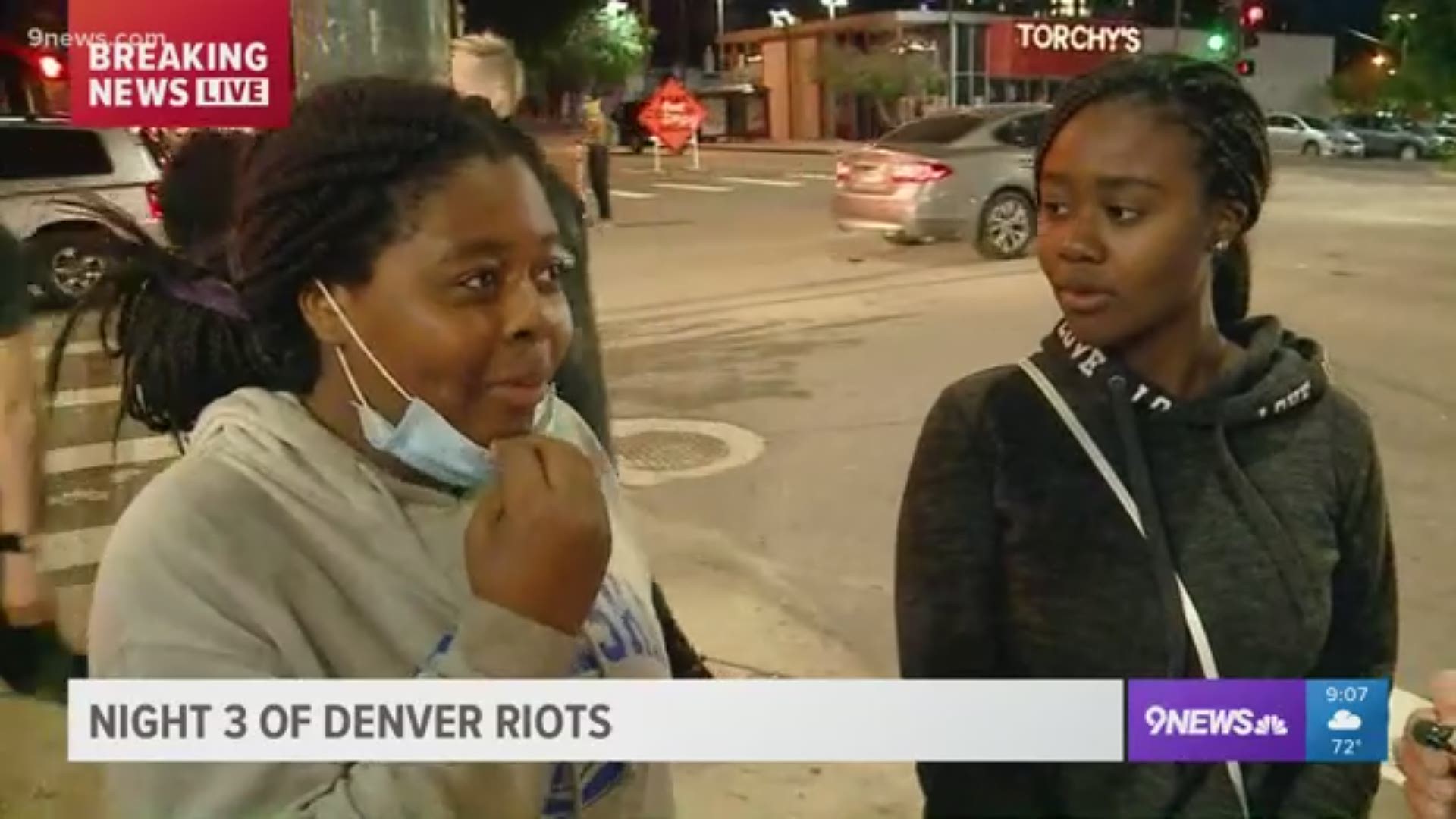 Polis ordered soldiers from the Colorado National Guard Reaction Force to mobilize to "support the City and County of Denver and local law enforcement to ensure public safety."

"Unfortunately, the actions of a few agitators are hijacking the memory and life of George Floyd," DPD said. "To use this tragedy to inflict harm on our community is inexcusable. These are a few items confiscated today that were intended to disrupt and cause damage to our city."

Credit: Denver Police Department
DPD said it confiscated items on Saturday "that were intended to disrupt and cause damage to our city."

Credit: KUSA
DPD said it confiscated items on Saturday "that were intended to disrupt and cause damage to our city."

9NEWS Reporter Jeremy Jojola saw multiple blasts of tear gas and pepper balls at a face-off between police and protesters shortly after 7 p.m. 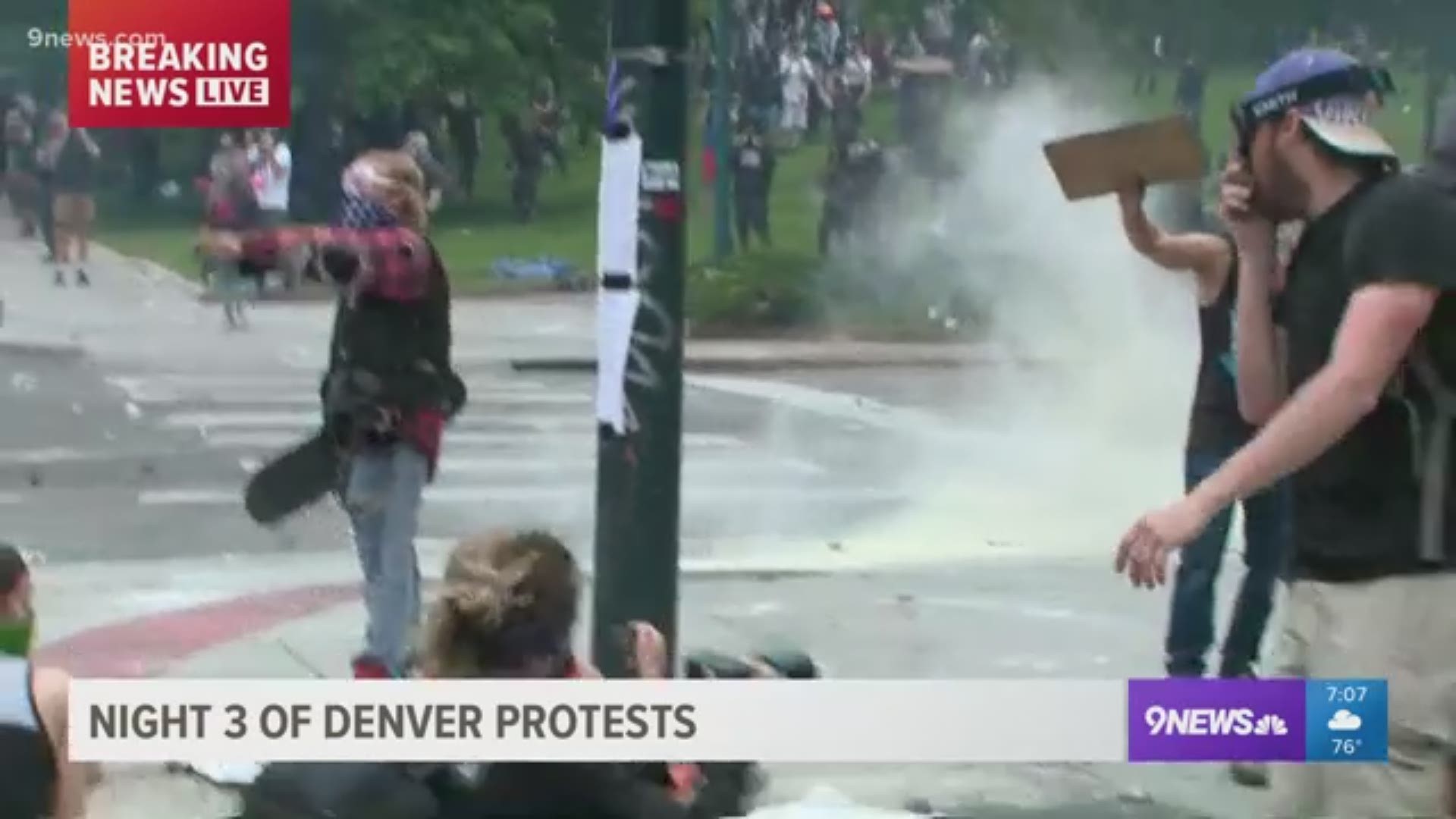 Around 6 p.m., a large police presence began moving to clear a large crowd outside the state Capitol with tear gas and took away signs being used as shields.

The video below shows tear gas being deployed shortly after 6 p.m. 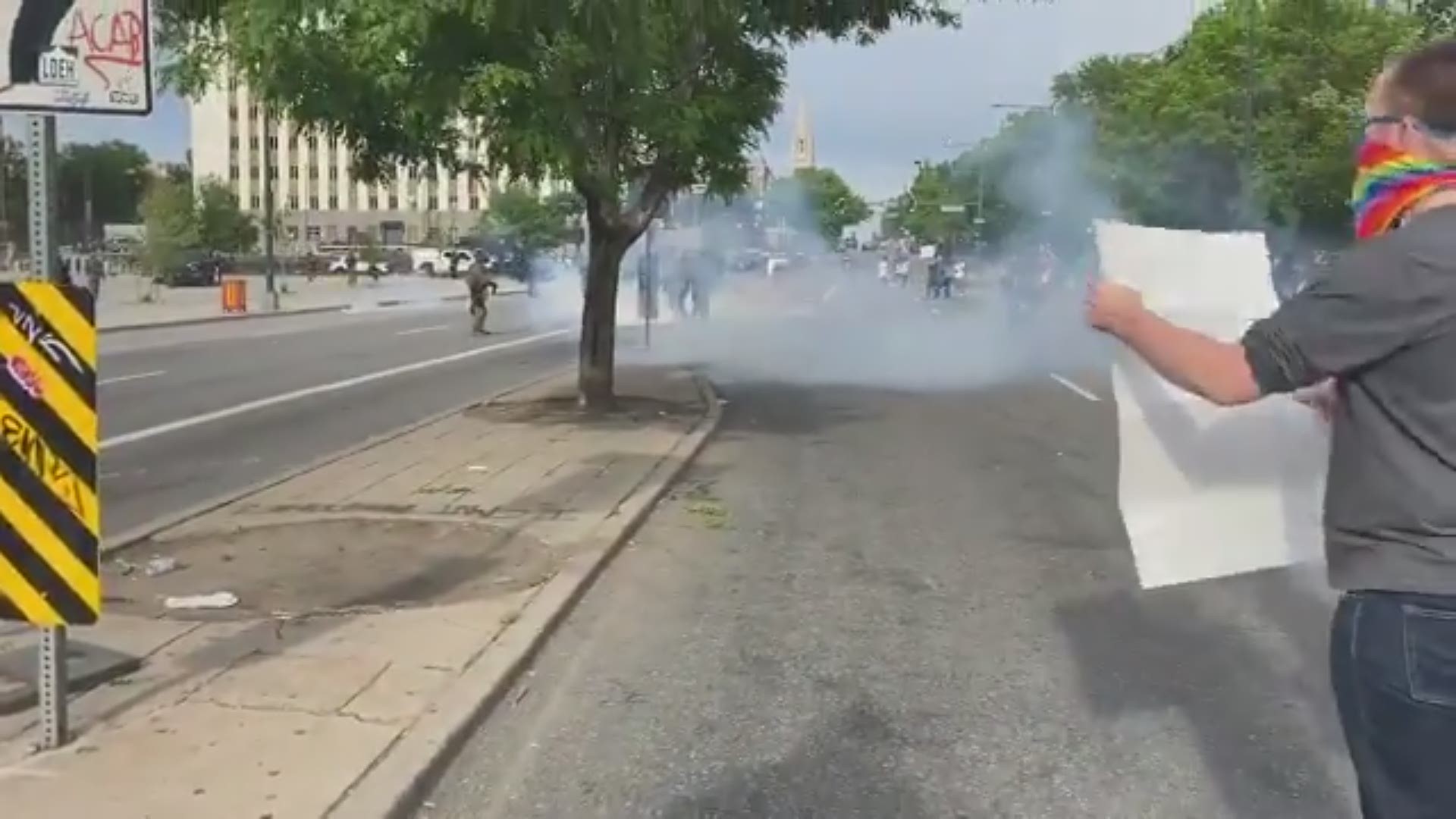 A standoff between a crowd and police at Civic Central Station also took place around 5:30 p.m., and 9NEWS reporter Steve Staeger said the crowd was chanting the name of Elijah McClain, who died after being restrained by Aurora Police (APD) officers in 2019.

Jojola earlier in the day followed a group that peacefully marched around downtown.

The Regional Transportation District (RTD) has suspended all bus and light rail service in and out of downtown Denver until at least Sunday after protests Thursday and Friday night ended with tear gas, shattered windows, arrests and injured police officers.

RELATED: RTD suspends all bus and light rail service to and from downtown Denver

The second day of protests in response to George Floyd's death was largely peaceful until Friday night, which included tear gas, flashbangs and fire.

DPD identified 13 people arrested during Thursday's violent protests, and said 19 more were arrested on Friday, who likely won't be identified until Monday.

The protests were meant to be a statement against police brutality after a video shared widely on social media showed a Minneapolis police officer kneeling on Floyd’s neck while he was heard saying, “I can’t breathe.”