Max Bailey said he jumped on top of the vehicle to avoid getting run over by the driver. A few moments later, the driver struck him and drove away. 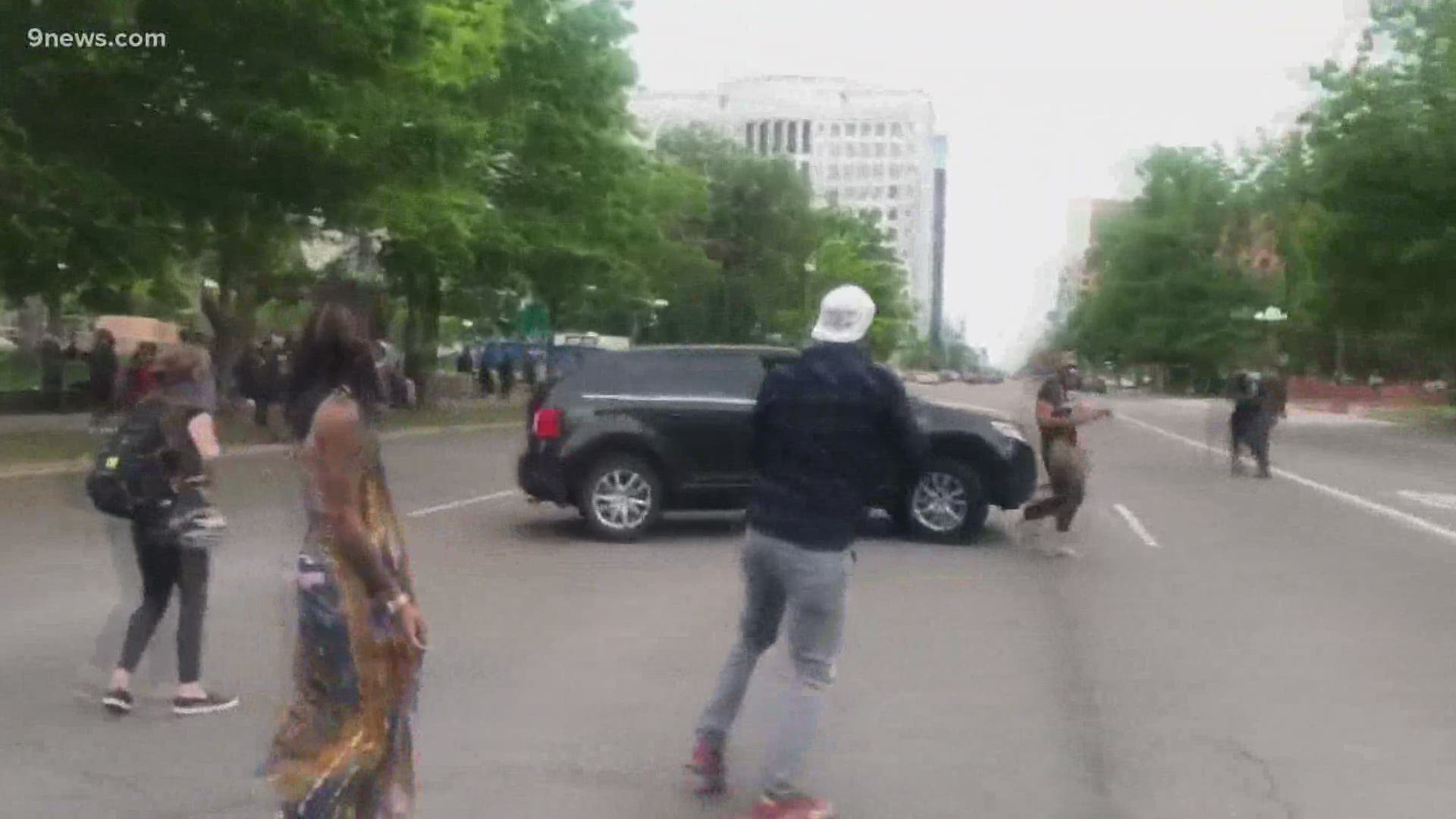 DENVER — Max Bailey says he showed up to Thursday’s protest in Denver about 45 minutes after it started, as some of the crowd started marching away from Colorado's Capitol to different parts of downtown.

He was there with a family member and some friends he has joined at protests before. They came to march in support of Black Lives Matter and to protest police killings, most recently one in Minneapolis, where George Floyd died after an officer held him to the ground and held a knee to his neck.

“I just want to take a second and say, rest in peace to George Floyd. It’s in his memory, pain and outrage, at what happened to him that we were out there,” Bailey said to 9NEWS. “It’s heartbreaking, it brings me unrest and pain in my heart to see that video. He deserves to be with us right now. It shouldn’t be happening, and still be happening.”

The protest took an unexpected turn Thursday night, when a driver blocked by protesters started to push through the crowd at an intersection. A video shared widely on social media shows one man from the crowd on top of the vehicle, who then jumps back to the ground. The video does not show what happened before the person filming turned on her camera. As the man walks away from the vehicle, the driver turns back toward him, hits him, and then drives away as a crowd chases it.

Friday afternoon, Denver Police said they were still working to gather information about the driver and the victim.

Bailey identified himself as the man on top of the car in the video.

“Everyone sees the clip where I’m on top of the car, but prior to that, I was just standing there,” he said. “Originally she was stopped. All cars were stopped. I think she got impatient and thought she could force her way through people who were standing there chanting.”

Bailey said he joined the group near the vehicle, hoping to stop the driver from hurting anyone. He says she accelerated, and he only had one direction to go safely.

“Some people on the sides, jumped to the sides. I didn’t think I had the time, she kept accelerating, to get out to the side. I didn’t want to go under her car. So I just put my hands on the hood and launched myself up on the hood," he said.

He jumped off seconds later. Bailey said the driver then turned in his direction and knocked him to the ground. He was able to get up and walk away, but said his knees and hip are bruised, and he’s concerned about additional injuries to his lower leg and foot.

“I’m alive and breathing, that’s… something I’m thankful for.”

Bailey said he was in contact with police Friday afternoon. He’s also been responding to people online, questioning his decision to get on top of the car.

“I have been responding very respectful to people who ask why I’m on the car, because I don’t condone getting on cars while you’re protesting. I don’t support -- destroying anybody else’s property,” he said.

“The reason I was in front of the car was to make sure everyone was safe and to get this lady to stop from running over protesters. The reason I got on top of the car was because she accelerated into me and I’m not going to lie down and let somebody run over me.”

A day after it happened, Bailey is still recovering but hopes to march for the cause again soon.

“I’m still in pain and angry for George Floyd,” he said.

“That’s where my heart is, in Minnesota, pray for that community, his family, all my peoples’ peace. My mind today is with all my people in Denver who are just fighting for basic, basic rights."

Bailey said he is a recent graduate from the University of Colorado Boulder, with a degree in Integrative Physiology and a minor in Philosophy. He plans to apply to medical school next. While in college, he was active in the Black Student Alliance and he also runs an organization that feeds the homeless.

But right now, he remains focused the message that brought him to downtown Denver to protest.

“I don’t want to lose the message of, rest in peace George Floyd. He should be with us here now,” he said. “God bless him and his family.”