McCaffrey brothers hailed as heroes after a rescue on the trails

Dan Smoker credits the McCaffrey brothers and Mann for saving his father's life. He said without them, his dad could've died in the 11 minutes it took paramedics to get to the scene. 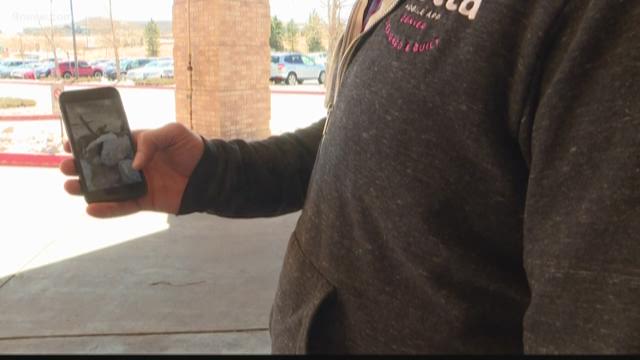 CASTLE ROCK - What was supposed to be a day of leisure on the hiking trails turned into a quick nightmare for one man and his grandson.

Dan Smoker and his wife temporarily left their home in Castle Rock for a quick anniversary trip to San Diego. While they were gone, Smoker's dad - also named Dan - traveled from his home in Ohio to stay with his grandchildren.

On Saturday, he and his 13-year-old grandson, Eli, decided to hike the Castle Rock trail. The trip up was successful - noted by a selfie of the duo they texted to the rest of the family.

Shortly after, things took a turn for the worse.

"It was about five minutes later my wife and I were in line for lunch in San Diego when we got a call from my son - relatively frantic - saying that grandpa had just fallen off of Castle Rock," Smoker said.

Dan fell about 20 feet, according to his son, and broke his neck, femur, pelvis and nine ribs. He also suffered internal bleeding in his abdomen and had blood on his brain, Smoker said. He's currently in the Intensive Care Unit at Sky Ridge Medical Center in Lone Tree but his family says the fact he's alive is reason enough to believe in a higher being.

"The hospital staff has told us over and over that it's a miracle he's alive," Smoker said. "It's a miracle that he's not paralyzed."

Dan's family is comforted by a picture taken at the scene where he fell. It shows Dan on a stretcher getting help from paramedics while the image of a cross seems to appear behind him in the rock.

"My father had fallen at the foot of the cross and it's kind of interesting looking at what we see as miracles through this," Smoker said.

Three of those miracles are big name football players in Colorado and across the country. When his dad fell, Smoker said NFL players and brothers Christian and Max McCaffrey and their former Valor teammate Michael Mann happened to be close by.

"There were two occasions where he had stopped breathing," Smoker said. "At one point they couldn't get a pulse so they did chest compressions as well."

"They really took Eli under their wing," he said. "He had been through a very traumatic experience seeing his grandfather fall."

Smoker credits the McCaffrey brothers and Mann for saving his father's life. He said without them, Dan could've died in the 11 minutes it took paramedics to get to the scene.

"Obviously everything around this story is pretty amazing, in my opinion," Smoker said. "It's a miracle he's alive and a lot of that is due to the right placement of these people at the right time. These people saved my father's life."