Memorial honors officer killed in line of duty in 1965

People all over the country are recognizing the service and sacrifices of law enforcement officers during National Police Week set aside by John F. Kennedy in 1962. 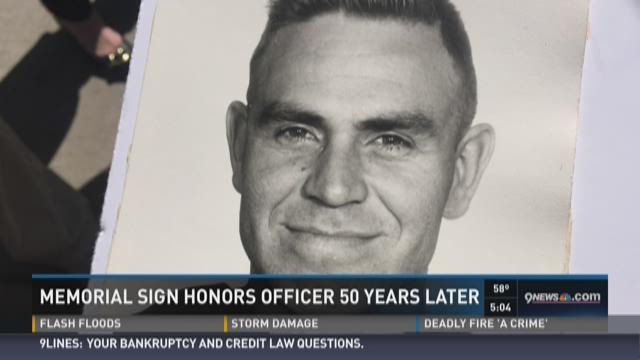 People all over the country are recognizing the service and sacrifices of law enforcement officers during National Police Week set aside by John F. Kennedy in 1962.

Seventy-two Denver Police officers have died in the line of duty and Wednesday, one man was honored for his ultimate sacrifice more than 50 years later.

Officer Paul Major died in the line of duty in 1965.

A memorial sign was dedicated in his honor thanks to a group of CEC Early College high school students.

1 / 5
<p>Denver Officer Paul Major died in the line of duty in 1965. Thanks to students at CEC Early College, a memorial honoring his ultimate sacrifice was unveiled on Wednesday afternoon. </p>

"For me, it was a great honor being able to be a part of something like this. I always wanted to make a difference," student Mario Sandoval said.

The forensic science class raised money for two fallen officer signs and met with the families before the dedications.

Like most memorials, the gatherings become a family reunion of sorts, for relatives and the thin blue line.

Karen Fouts lost her father in the line of duty as a Denver cop.

"We all remember that night," she said.

She was just 14 years old and it was a month before her birthday. For her, it doesn't seem like it was five decades ago when two officers in uniform came to her front door.

"It was 8:40 p.m. on a cold Wednesday night. Jan. 20, 1965," said Captain Bill Nagel at the dedication ceremony. "District 3 patrol car 31 with Officers Paul Major and Albert Peterson on board was stopped at a red light at Broadway at Ellsworth."

As the officers started to drive, a car ran the red light.

This would be Officer Paul Major's last case of his 15 year career and he wasn't even supposed to be there.

"As fate would have it, that night Officer Major was reassigned to take the place of another officer who had called in sick," Nagel said.

The officers suspected the car was stolen as it sped away, then suddenly stopped.

"The doors of the suspect vehicle opened, and Major yelled to his partner, 'They're making a break for it,'" Nagel said.

The suspects ran down the alley near Bayaud and Broadway. One of the men had a gun.

"There was nothing anybody could do because the guy who killed him shot him point blank," Fouts said.

Fifty-one years later, Major was honored with a memorial sign close to where he died.

"Now we can always drive by it -- even if it has graffiti on it. We'll know," Fouts said to a friend.

The high school instructor plans to include the community service project in her class for years to come making it possible for more officers to be honored.