Last year, 22,592 couples filed for "Dissolution of Marriage." Experts said they're expecting a surge of divorces in 2021. 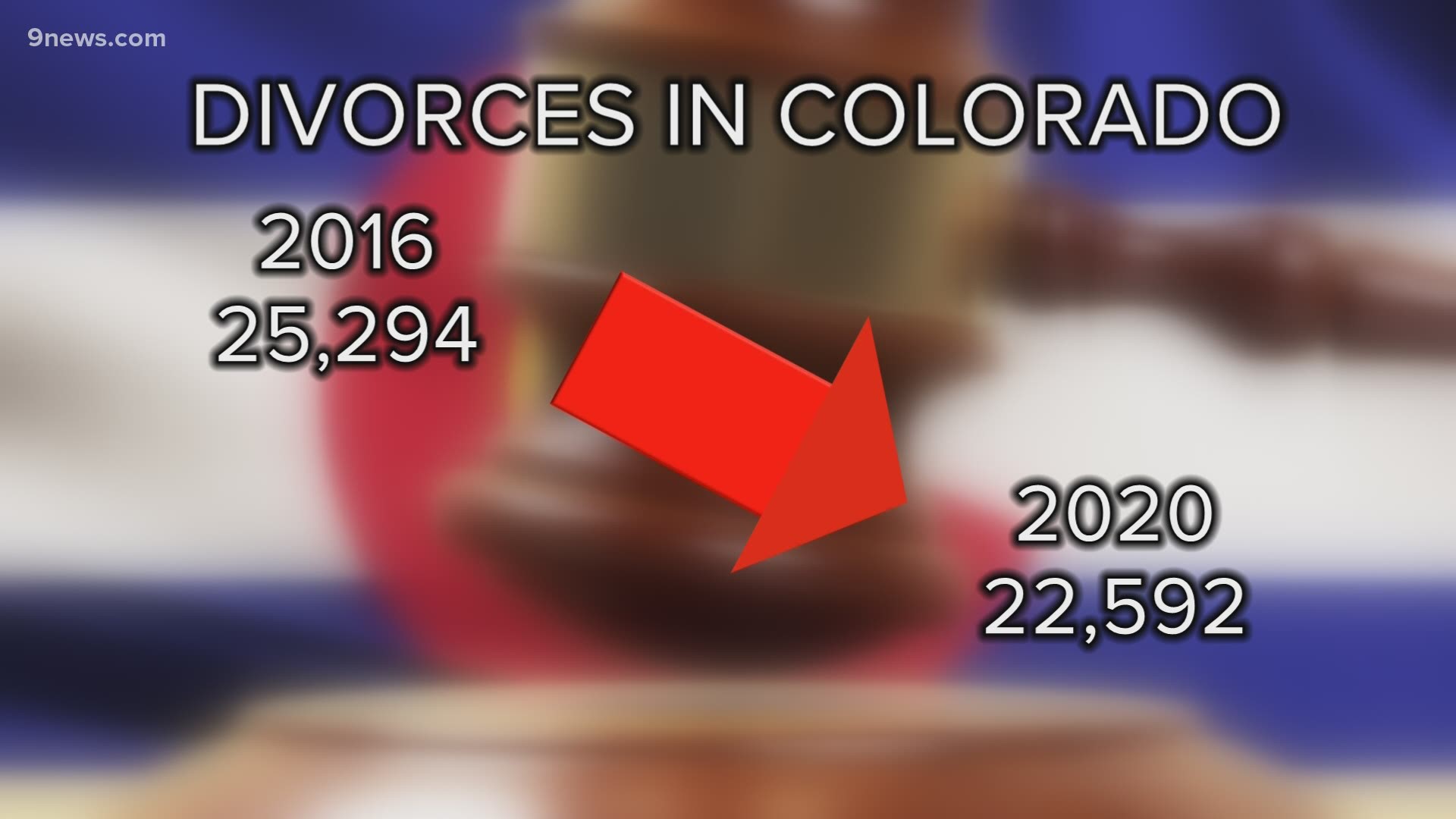 COLORADO, USA — Some Colorado divorce lawyers and relationship therapists are predicting a surge in divorces and legal separations in 2021, citing a "delayed effect," as a result of the pandemic.

This week, Mile High Mornings is looking into the impact the pandemic is having on relationships. The team found a drop in divorces last year in Colorado, but a spike could be coming this year, according to experts.

RELATED: Love in the time of COVID-19: How quarantine is affecting couples

Couples are spending more time at home and in close quarters together. Most school districts in the state shifted to remote learning, at least for a portion of 2020, which relationship experts point to as another stressor on parents.

"The pandemic really made people think about how short life can be," said Heidi A. Sauder, a clinical psychologist at Enrich Relationship Center. "It made them start to wonder if they want to be in this relationship they were in or get out."

RELATED: 3 Colorado couples told us what it took to make their relationship work during the pandemic

However, some couples came together to support one another, avoiding a breakup.

"What I found was that some people really found a way to team up around the pandemic," said Sauder. "When we stress people, sometimes what happens is they naturally seek social support and so peoples' partners, especially your romantic partners, are sometimes their foundational support."

"We are seeing a rise in cases," said Lewis.

There is a "delayed effect" in divorces and separations, according to Lewis, because couples are struggling financially, and some are still out of work from when unemployment skyrocketed in the first few months of the pandemic.

"It had a chilling effect because people weren't sure what was going to happen," said Lewis. "They were afraid, they were concerned financially. They were uncertain whether they should take this leap and try and get a divorce. They were putting a band aid on their situation."

In Colorado, by law, the "Final Decree of Dissolution of Marriage" is 92 days, meaning under normal circumstances, it will take at least a minimum of three months to finalize a divorce in court if there is a contested hearing.

According to Lewis, most family law cases are being held on WebEx because of COVID-19 protocols, which is slowing down case resolutions in Colorado.

Couples with children, lots of assets or property could draw out even longer in court. Lewis said in her experience, most cases are settled in mediation.

"Most people want to resolve their case without having to going to court to have someone decide their fate," said Lewis.

Doctors John and Julie Gottman who founded The Gottman Institute, are considered experts at predicting whether couples will divorce. They believe this pandemic is unprecedented times for relationships.

"Couples are living in a situation that we have never seen before and never tapped into in terms of our research," said Julie Gottman.

The Gottman's books and research are studied by therapists worldwide. The clinical psychologists have been studying couples for 40 years.

It's inevitable, according to the Gottmans, that some couples will separate because of the pandemic. They encourage others in relationships to use this is time to get to know your partner better.

"Couples who are happy are becoming happier because they now don't have to follow through with that checklist that they have to fulfill in normal life. They now have time where they can really open up to one another."

The Gottman Institute has a tool to help struggling couples strengthen their relationship. They have a free app offering up conversation starter questions to help with communication. You can find a link here.