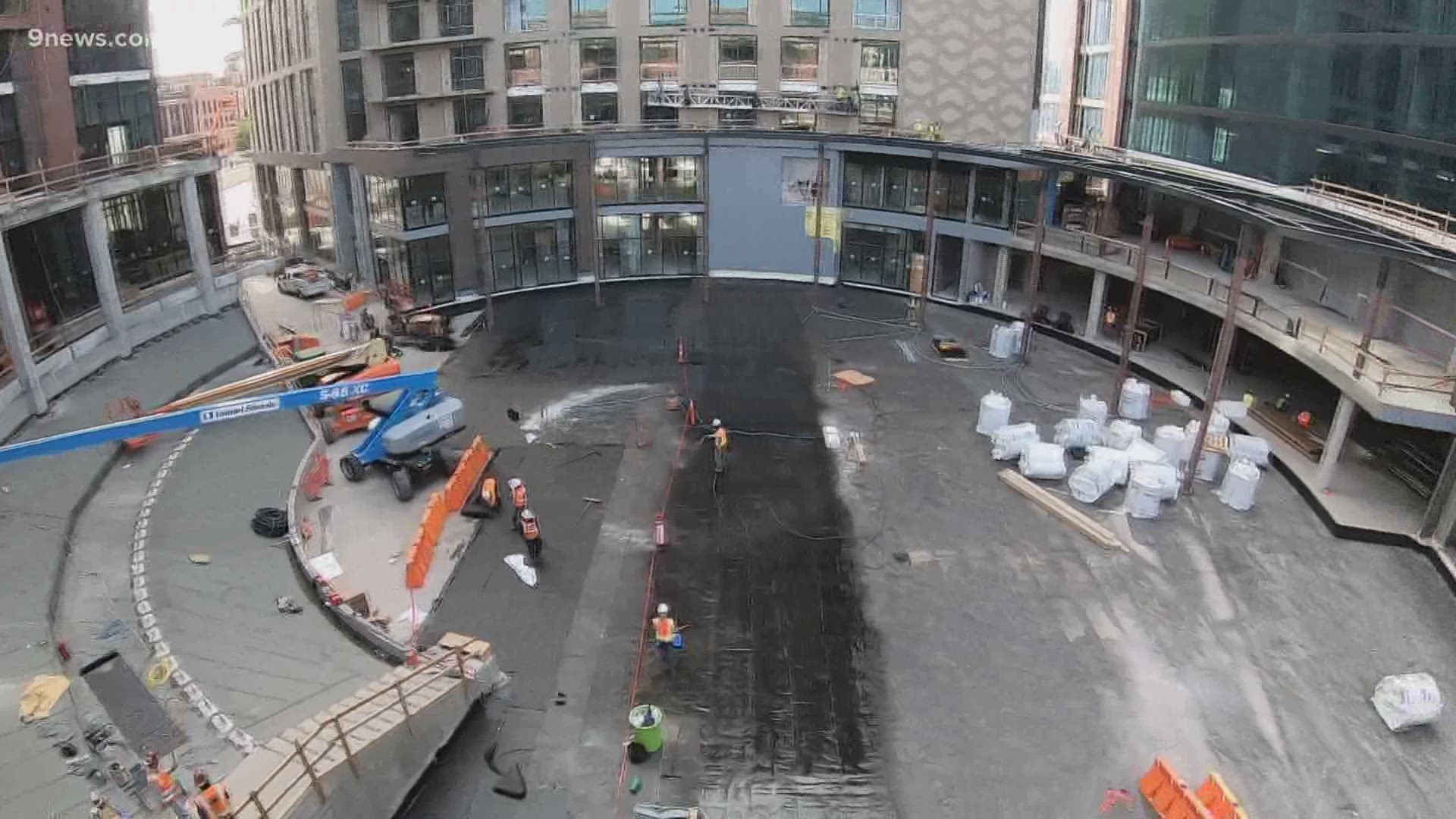 DENVER — Construction on the latest addition to Denver's historic Lower Downtown neighborhood is the final stages, according to developer West Lot LLC.

McGregor Square is the complex under construction across from Coors Field that will include a boutique hotel, luxury condos, office space and restaurants.

Patrick Walsh, general manager of the project, said the open space in the center of the three downtown towers will be open to the public year-round.

"The biggest thing we probably have is a 30 thousand foot plaza that we think we can activate throughout the entire year with ice skating rinks in the winter, movie nights in the summers," Walsh said.

The large plaza will have green space seating and an outdoor big screen. The lower level will be outfitted with sports bars, a coffee shop and other retailers.

"We’ll have fine dinning, a food hall, an Italian restaurant and some other retail as well," Walsh said.

A space in the hotel will become the home for the Rockies Hall of Fame.

The developer said the idea behind the project was to enhance the Lower Downtown neighborhood without taking anything away from its history.

"LoDo is such a great dynamic area. And we wanted it to be a part of it, not something that we dropped it in," Walsh said.

The new high-rise complex spans a city block. The building's bricks are designed to blend in with the old neighborhood but the architecture has a new modern look, including a top floor bridge between two connecting towers.

The area used to be the west parking lot of Coors Field before construction crews broke ground about 27 months ago.

McGregor Square is named after the Colorado Rockies late president, Keli McGregor, who passed away in April of 2010. The developer said McGregor had a vision for the $365 million project that is now nearly 80% complete.

"We have emails from about 15 years ago where he was talking about this, and what's crazy, it ended up being about what he wanted," Walsh said.

The 176 room boutique hotel will be run by Sage Hospitality Group which is responsible for operating Denver's Crawford Hotel at Union Station and the Maven Hotel at Dairy Block.

"It’s a really nice hotel. It’s not a Four Seasons price point by any means, but it’s an affordable place to bring your family for a ball game or just the long weekend in Denver," Walsh said.

Neighboring the hotel are 103 luxury condos. About 65% are already sold, according to the developer. Some residents are expected to move-in sometime in mid-January.

Coors Field will be getting a facelift too as part of this project. Some of the revenue from McGregor Square will help cover improvement costs, which is part of the Colorado Rockies 30 year lease agreement with the ballpark.

"This whole project came about to pay for the improvements that need to be done to Coors field. Rather than throwing that onto the tax payers or passing it onto the Rockies, we thought that it was nice to bring life to this block," Walsh said.

Starbucks and the Tattered Cover bookstore have already signed on as tenants, according to the developer.

The six floors of office space on the west side of the block is expected to bring up to 1,800 people throughout the week.

Walsh said the pandemic has slowed down leasing tenants but the developer is confident that interest will increase as the McGregor Square gets closer to completion.

"We’re talking to a few law firms, some younger tech companies, and some more of those traditional accounting firms," Walsh said. "We do think that the outdoor space will really help us out in this COVID world that we live in."