Local and state police looked into a claim made on Twitter that a driver was treated unfairly during a traffic stop in Virginia Beach. They found no record of the stop and question if it happened. 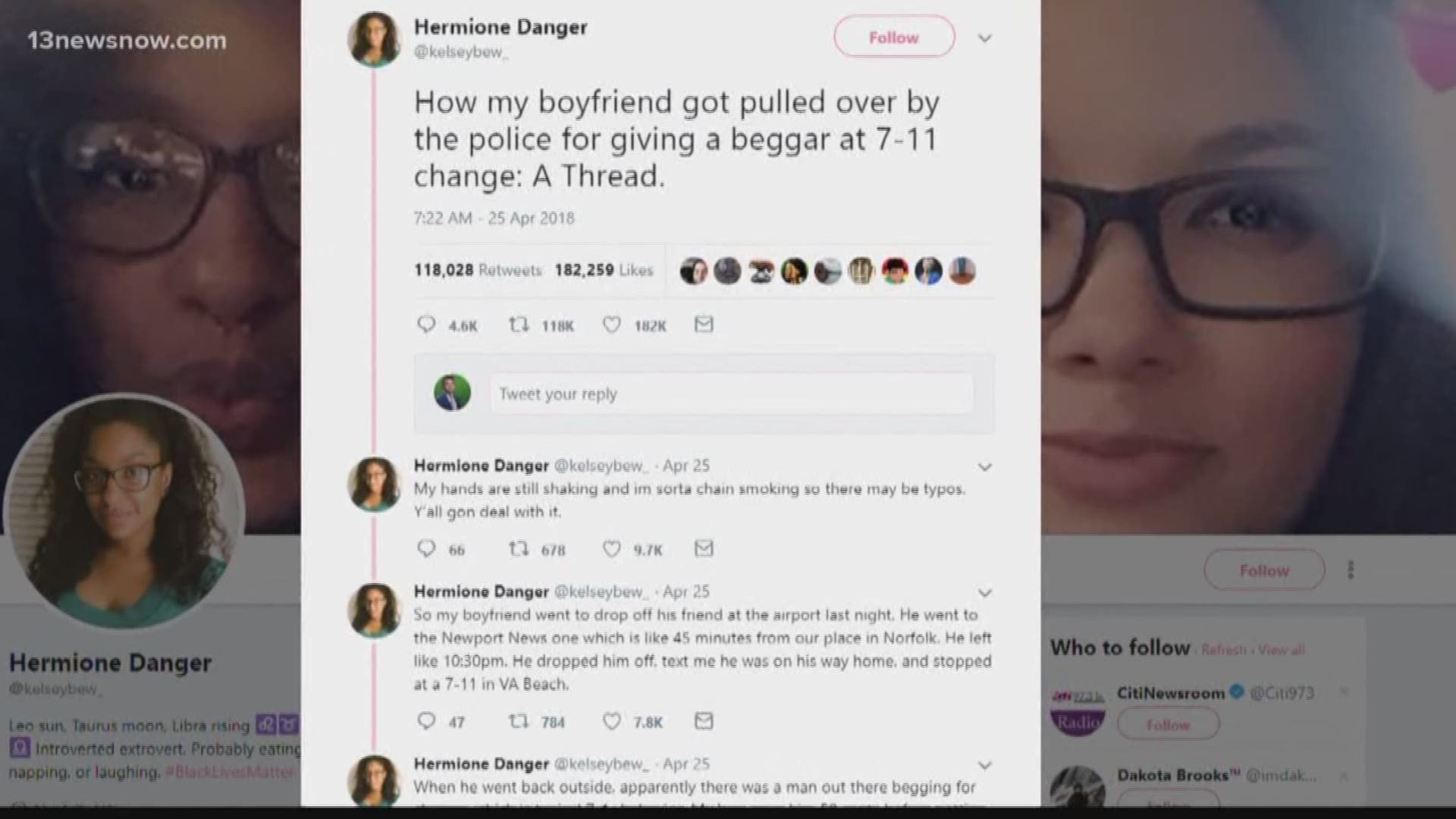 VIRGINIA BEACH, Va. (WVEC) -- It sounds like a shocking case of police injustice.

A local woman tweeted an account that allegedly happened to her boyfriend earlier this week on how a seemingly routine traffic stop quickly escalated into a life-or-death situation in Virginia Beach.

How my boyfriend got pulled over by the police for giving a beggar at 7-11 change: A Thread.

Twitter user @kelseybew_ posted how her boyfriend was pulled over by police after giving a man outside a 7-Eleven convenience store change.

In the series of tweets, she claims the officer pulled a gun on her boyfriend and that a police K-9 searched his car after the officer allegedly smelled marijuana coming from inside. No drugs were found and after the lengthy ordeal, he was let go with no charges.

In just one day, the woman's story has been retweeted more than 100,000 times and caused Virginia Beach Police to launch an internal investigation as to what happened.

But so far, Virginia Beach Police claim they have no record of the incident ever even taking place.

We have worked diligently since receiving this allegation. This incident did not occur in the City of Virginia Beach nor involve Virginia Beach Officers. In fact, we are having difficulty determining whether this incident even occurred.

Virginia Beach Police followed up their tweets with a longer statement posted on Facebook Thursday afternoon, claiming they and other local police departments have no record at all of anything similar to what was described ever happening:

13News Now confirmed with the Virginia Beach Sheriff's Office that no employee was involved in any such incident.

13News Now also reached out to Norfolk Police and Virginia State Police on Thursday to see if any of their employees had been involved in any such traffic stop. They both denied any involvement.

Norfolk Police released this statement regarding the Twitter thread:

We have searched our records and from the information provided, this incident does not appear to involve Norfolk Police.

State Police also questioned some of the details in the Twitter user's account, including how a Virginia Beach Sheriff's deputy "saves the day."

In a statement to 13News Now, State Police note that "in this area, Sheriff deputies work the court systems and are only in their vehicles during the day to serve warrants and court documents, they do not work evening or midnight shifts."

The Norfolk Sheriff's Office also confirmed that they only have civil process deputies out on the streets to serve evictions and similar functions, and that they would not respond to a stop in another jurisdiction.

13News Now has reached out to the woman whose Twitter thread went viral, but so far have not heard back from her.

► Make it easy to keep up to date with more stories like this. Download the 13News Now App.