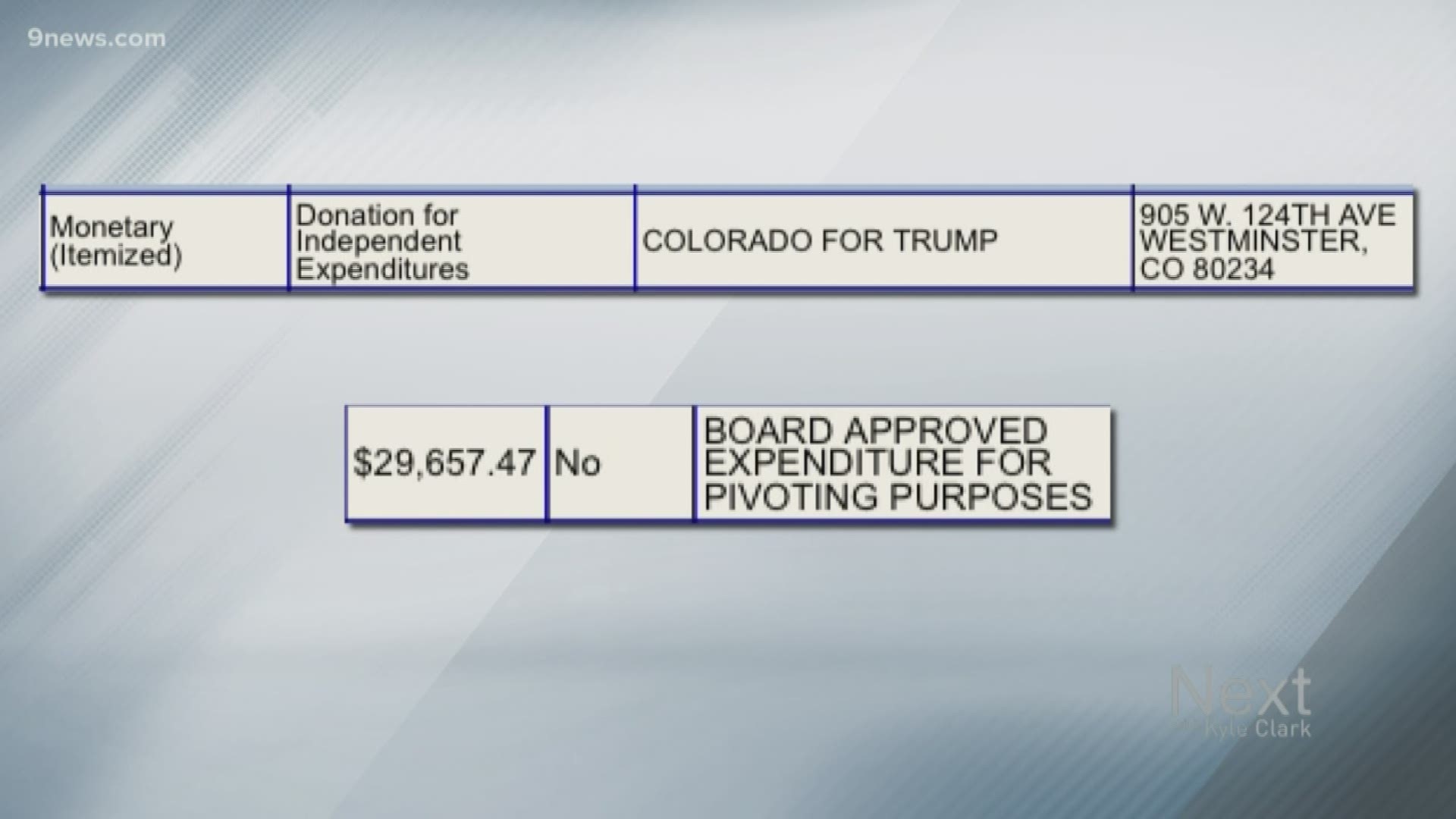 DENVER — One of two groups seeking contributions to try to recall Gov. Jared Polis (D-Colorado) recently diverted nearly a third of its money to a different effort.

In a campaign finance filing on Monday, that group reported giving $29,657.47 to "Colorado For Trump." The reason stated was "Board approved expenditure for pivoting purposes."

When Official Recall Colorado Governor Jared Polis created on March 12, it listed its purpose to:

"Establish a committee to evaluate and discuss a potential recall of Colorado Governor Jared Polis. Identify a group of Colorado voters to collect recall petition signatures. And potentially file a petition with the state for a recall. Collect contribution{s.}"

Colorado For Trump formed as an independent expenditure committee on July 1, and has a state purpose to:

"Support Colorado election efforts for candidates that support Trump regardless of political affiliation."

Both groups have the same person listed as the registered agent, Juli-Andra Fuentes.

Next has emailed and left a voicemail with Fuentes.

According to the Colorado Secretary of State's Office, state law is quiet on the requirements of how a committee must spend contributions.

In fact, a recent complaint on a similar issue was just dismissed by the Secretary of State's Office.

RELATED: Poll: Polis, Democrats overreached in 2019, but Colorado would pick a Democrat over Trump in 2020

On Aug. 12, a Kersey resident filed a campaign finance complaint with the Secretary of State's Office, claiming that the Official Recall Colorado Governor Jared Polis group was not spending her contributions the way she intended.

"I donated to this recall to get it going and now I understand they are not going to be doing the recall. I feel like I had been lied to and feel I no longer want to support this group in any way," wrote Starla Brethauer.

The Secretary of State's Office dismissed that complaint on Monday.

"Colorado campaign finance law does not prevent an issue committee that has collected contributions from deciding not to pursue a recall,"wrote Theresa Conley, with the Secretary of State's Office Elections Division. " And while Colorado campaign finance law allows Respondent to return unexpended contributions to its contributors, it is not required to do so."

Official Recall Colorado Governor Jared Polis is one of two groups created to try to initiate a recall. "Dismiss Polis" is the other committee actively having petitions signed to try to recall Polis. That group has reported $23,000 in contributions since forming in June. Dismiss Polis has until Sept. 6 to turn in 631,266 valid Colorado voter signatures to get a recall qualified for voters to consider.

Dismiss Polis could choose not to turn in the signatures they have collected.

If the group turns in the signatures and the petitions are deemed to not have the required amount, those voters would not be able to sign another petition to recall Polis during his term.

SUGGESTED VIDEOS | Next with Kyle Clark \