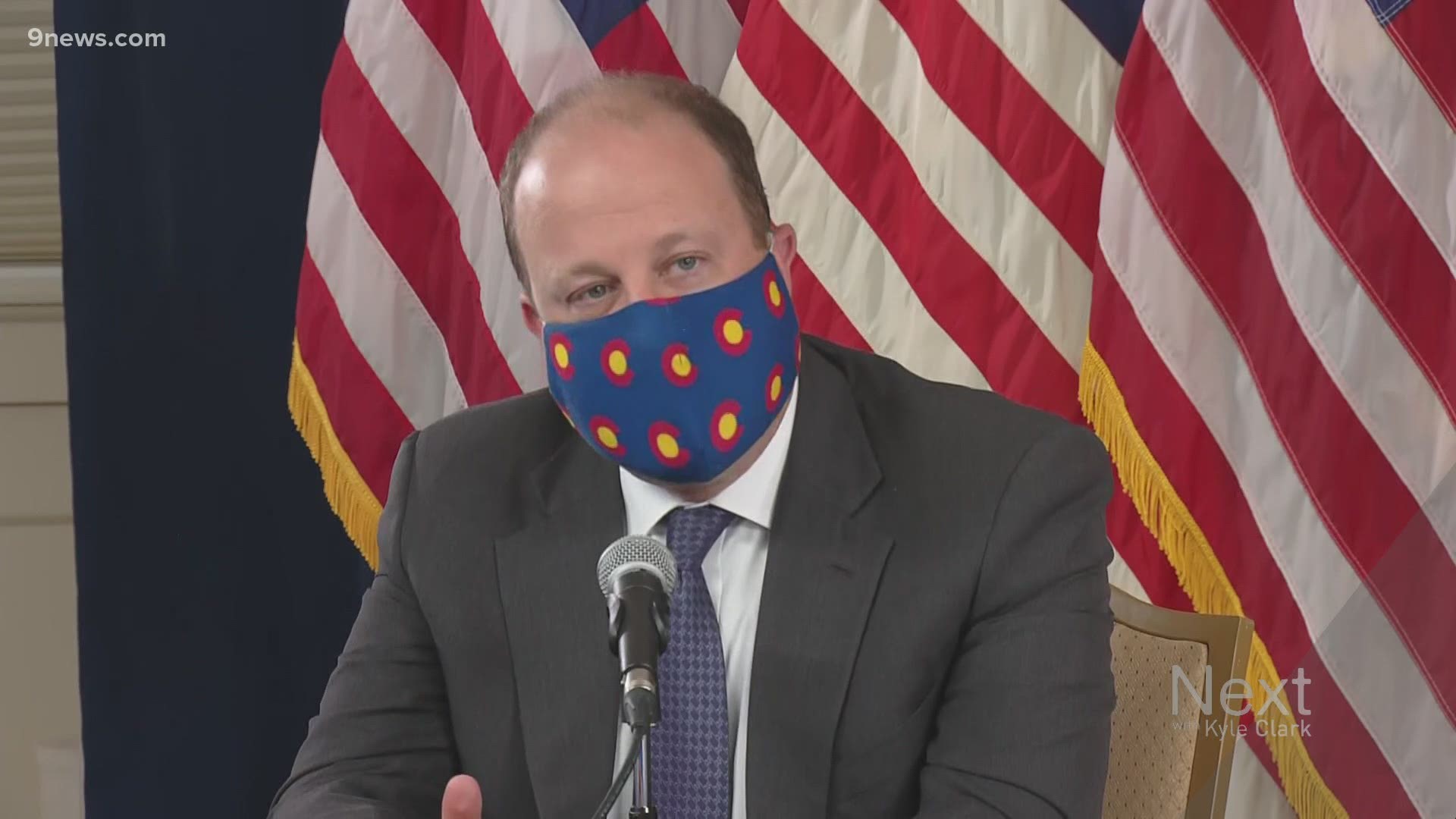 DENVER — Hours after Democratic Gov. Jared Polis announced a new statewide mask order to slow the spread of the novel coronavirus, some Republican-run sheriff’s departments and elected Republicans in Colorado spoke out against the mandate.

Colorado's mask order went into effect at midnight on July 17. Here are the basics:

Polis was joined by Denver Mayor Michael Hancock and Aurora Mayor Mike Coffman in his announcement Thursday. The mayoral elections in both Denver and Aurora are non-partisan, but Hancock is a registered Democrat and Coffman is a registered Republican.

In the joint news conference, Polis said he had been resistant to implementing the order, in part because of personal freedoms, but he cited the state’s increased rate of new COVID-19 cases for the mandate.

“Yes, I get that some people will say that this is a hardship, but let me tell you this. I meet with small businesses every day that haven’t been able to open up, and if things get worse, will have their businesses shuttered again. That’s a hardship,” he said.

COUNTIES THAT WON'T ENFORCE IT

A growing list of sheriff's departments and one county health department have issued statements saying they will not enforce the mandate:

Just as with the safer at home orders, my office will encourage citizens and businesses to take steps to protect their own health and safety, But my deputies WILL NOT be taking any action to cite citizens or businesses for not wearing masks. Be invested in your own safety, whether that means carrying a concealed weapon or wearing a mask be smart and do what is right for you.

These are trying times in many aspects for law enforcement. We cannot afford to take actions that further erode the public trust in us.  As such, the official position of the El Paso County Sheriff's Office is to continue to educate the public on the benefits of wearing face coverings in enclosed public places. We will stress that wearing a mask will slow the spread of COVID-19 and save lives. We will not, however, be expending resources of the [sheriff's office] on issuing citations to individuals not wearing masks.

Their statement explains the mask mandate is not a law that is subject to criminal prosecution, and businesses licensed by the state do have the right to ask customers to leave. People who refuse to leave could be charged with trespassing. The statement read, in part:

I believe we have many things that set us apart from the metro area, to include common sense, which we all know is not so common anymore. Let's all use our heads and get through this "Pandemic" together. We are firm believers in the Constitution of the United States, and the FREEDOMS that come with it.

In a statement posted to Facebook, Sheriff Steve Reams wrote: Just as with the safer at home orders, my office will encourage citizens to take steps to protect their own health and safety but my deputies will not be taking actions to cite citizens for not wearing masks. Unfortunately, the men and women of the Sheriff’s office have seen an increase in calls for service during the Covid 19 pandemic and trying to handle additional call volume related to the statewide mask order will not be considered a priority call. Egregious violations may be referred to the health department for further investigation.

As always, we all need to be invested in our own safety whether that means carrying a concealed weapon or wearing a mask; be smart and be responsible. #weldstrong.

Friday, the Weld County Board of Commissioners announced their county health department will not enforce the order, either. The governor does not have the power to issue such a mandate, they wrote, adding they will urge citizens to use a common-sense approach.

“In Weld County, we believe in the individual responsibility of citizens to determine how best to protect themselves, their family, their business and their consumers,” Weld County Chair Mike Freeman said. “Where the governor wants to force everyone to wear a mask, we believe in our citizens’ individual right to make that determination.

Republican District Attorney George Brauchler represents the 18th Judicial District, which covers Arapahoe, Douglas, Elbert and Lincoln counties. He said he is not convinced violating a mask order could qualify as a crime.

“The Governor is on a power trip and [in my opinion] his mask mandate is a clear violation of our civil liberties. I’ve retained counsel with the intent to sue. Stay tuned...,” he wrote in a tweet.

RELATED: History shows opposition to mask orders is nothing new

WHAT ABOUT DOUGLAS COUNTY?

Douglas County’s Republican commissioners quickly announced that the county would opt-out of the mask mandate ordered last week by its health agency, the Tri-County Health Department (TCHD). They also announced the formal intent to withdraw from TCHD because of the mask rule, as they first suggested they would in March because of the stay-home orders.

Last weekend, the Douglas County Republican Party also posted and deleted a Facebook image depicting a cartoon police officer labeled "Polis,” who is shown stepping on the neck of a man wearing a mask. The cartoon included the caption "We Can't Breathe," echoing the words said by George Floyd, who died in May after a Minneapolis police officer held a knee to his neck.

Though, the commissioners said Thursday afternoon they will encourage compliance with the statewide order.

"While consultation with local governments would have been preferred, now that we've heard from our state's top elected official ordering a statewide mask mandate, we urge our citizens and business communities to comply with the public safety Executive Order,” they wrote in a statement. “We will continue to encourage personal responsibility as we monitor Douglas County's data over the next 30 days for a reduction in the spread of COVID-19-related hospitalizations, which as of today are 13."