After a short delay, Colorado Gov. Jared Polis launched into the promises he hopes your tax money can keep. 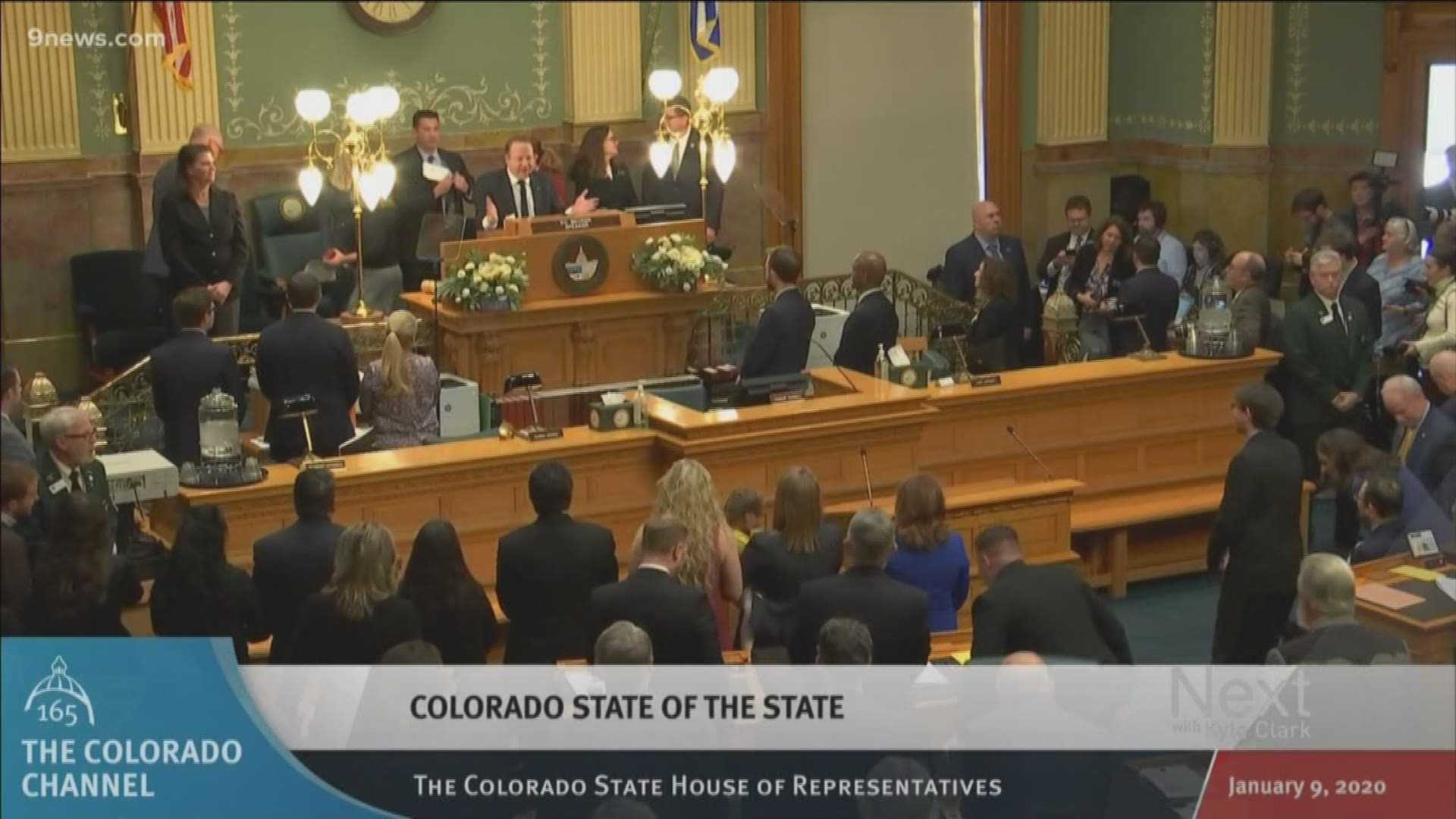 DENVER — When Colorado Gov. Jared Polis (D) wrote his State of the State address, he likely left notes to stop for applause, but he probably didn't write down: "Prepare to be delayed by oil and gas protesters."

It was a unique start to Polis' second State of the State speech on Thursday.

Oil and gas protesters shouted from the gallery before Polis entered the House Chambers at the state capitol. They were escorted out by Sergeants-at-Arms and Colorado State Patrol troopers.

Denver Police arrested 38 of the protesters for trespassing, disrupting a lawful assembly and obstruction of a peace officer.

Just as Polis said "good morning" to start his speech, another protester shouted, "Ban fracking now!" from the gallery.

Once he got going, his nearly one-hour speech touched on the accomplishments from last year and highlighted some of the key policies he'd like to see come out of the state legislature in 2020.

In 2019, his biggest push was full-day kindergarten funded by the state.

"Our top priority this session is empowering every single Colorado community to offer free, full-day kindergarten," Polis said in 2019.

State lawmakers set aside $175 million for full-day kindergarten, an amount that will need to be funded each year.

His focus in 2020 and beyond is preschool.

"I’m committed to achieving universal access to quality preschool for 4-year-olds by the end of my first term," said Polis on Thursday.

How much would free preschool cost the state?

In a one-on-one interview after his state of the state address, Polis avoided a dollar amount.

"We provide some preschool funding today, it just doesn't reach everybody. Many families have to pay for preschool. We're working on expanding that access," said Polis.

"We should feel good about reaching this milestone. But it has taken more than three decades to get only half the job done. We can and we must do better," said Polis.

"The state spends far too much money back-filling some of the wealthiest districts not only in the state, but in the country. That is truly at the root of our school funding issues. Together, we can fix this systemic problem and finally raise pay for our hardworking educators," said Polis.

What does that mean?

After the speech, Polis explained how it's a mill levy issue.

"Local mill levies are much lower in some of the wealthier areas and they have been forced up in districts that have less of a tax base," said Polis. It's created inequities in the sense that many of the areas where property values are the lowest, pay the highest tax rate."

A formula determines how much money each school receives each year. When the property tax of the district cannot fully fund the amount, the state backfills the difference. The less the state would need to do that, the more it might have for other areas.

One issue that was near the end of his speech last year and again this year: roads.

"We need to come together around a bipartisan funding mechanism for our future transportation needs that the voters of this state will accept," Polis said in 2019.

Voters did not accept Proposition CC, which would have allowed the state to keep TABOR refunds to pay for roads and schools. One-third of the money would have gone to roads. The proposition was not specific about which projects and the state legislature could have changed how the money was spent.

"The General Fund alone cannot meet our state's needs, and voters rejected three straight ballot initiatives in the last two years to fund roads, even while our existing revenue source — the fuel tax — is bringing in less and less at a time when our needs are growing. Thus, Coloradans look to us in this building to think big and do more to fund our roads," Polis said on Thursday.

Now, Polis is seeking an answer without voter approval.

"We think punting to the voters has played out, it hasn't worked. If they want to rise to the occasion and actually do something about congestion and traffic and access to the mountains on weekends, they're going to need to work together to do it here," Polis said in a one-on-one interview after his speech.

He mentioned the state's gas tax as one possible solution. Drivers pay 22 cents per gallon, a tax rate that hasn't changed since 1992. If lawmakers try to change the gas tax, it would require a vote.

Polis took a shot at the hospitals during his speech.

He wants to see a public health option get out of the state legislature this year, but the hospital associations are already airing political ads against the idea.

Front Range hospitals with over $2 billion dollars in profits in 2018 are already using those profits from overcharging patients to run ads against legislation that could save families money," said Polis.

He said it will be a hard sell, but Polis has asked the legislature to put $118 million of the state's budget directly into savings. That's the same money that could go to roads, schools, health care, etc. He tried this last year, with a higher number and only got about one-fifth.

"Last year I asked the legislature to put away an additional $180 million into savings to replenish what was spent in the Great Recession, but only an additional $40 million was placed in reserve. So, this year I urge you to replenish our reserves and recessionary tools with an additional $118 million to bring us in line with the national average and prepare us for a future downturn, whenever it happens," Polis said on Thursday.

And despite the protests that started before his speech, Polis never talked about oil and gas.