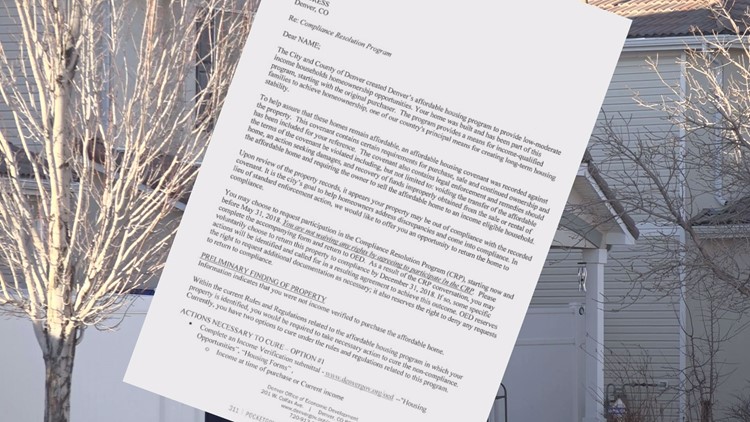 A nicer letter, but still no promises for homeowners caught in Denver snafu

DENVER — Denver’s city government still isn’t offering people a way out of the trap they’ve fallen into with the city’s affordable housing program, but it did re-draft a letter to the more than 300 homes affected that’s much less aggressive.

A 9NEWS investigation identified dozens of homes in the city’s affordable housing program that are owned by people who never qualified to buy them. The bulk of the problems occurred in Green Valley Ranch, which has more than 600 of the city’s homes under the program.

Those homeowners each face the prospect of losing tens of thousands of dollars in equity if forced by the city to sell their home at below market value to a qualified buyer.

A group of city officials said in a news conference last week that they were offering homeowners a six-month delay of enforcement against them with no strings attached.

But that’s not at all what the letter sent to the hundreds of homes said. It told homeowners that signing up for the delay was an admission of non-compliance and an indication of willingness to comply with the city’s solution to the problem.

Just like the first letter, the new one gives homeowners two options: prove that they have low enough income to qualify—or sell the home to someone who does.

Those who can retroactively qualify would have to abide by the terms of the program, which comes with price controls that restrict the homes to prices far below market value.

Mayor Michael Hancock (D-Denver) apologized Monday for the wording in the original version of the letter reaching out to homeowners for compliance.

He promised a letter with “no strings attached,” but said he couldn’t promise to keep people who bought the homes in good faith from being forced to sell. He did say the city would do all it could to prevent people from being forced out of the houses in question.

The new letter says homeowners "are not waiving rights by signing up for the Compliance Resolution Program, but signing also requires checking a box saying they would "like to voluntarily return to compliance."

FAQ about this affordable housing problem in Denver