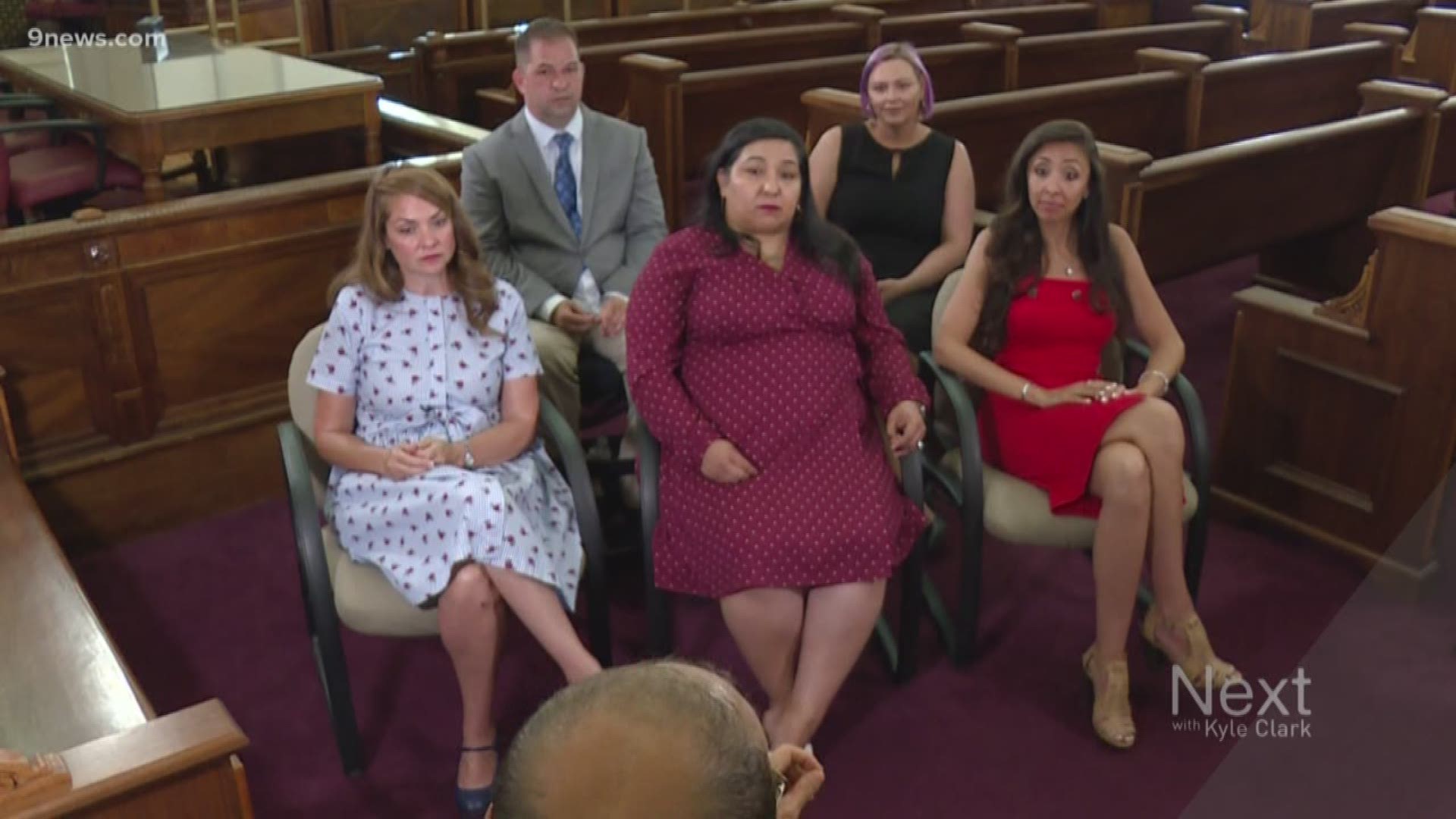 DENVER — Inauguration Day for the new Denver City Council didn't get any easier after they escaped the late morning sun that had using paper fans.

That's because afterwards the five new council members sat down with Next for an extended interview.

RELATED: Who's in, who's out at Denver City Council

Amanda Sandoval replaces Rafael Espinoza, who decided not to run for re-election. She served as his chief of staff for three-and-a-half years. She represents District One, which covers northwest Denver, including the Highlands, Jefferson Park, Berkeley and Sunnyside.

As they start the first day of their four-year term, they have similar thoughts for the biggest issue facing Denver today.

"The relationship between land use and transit infrastructure," Hinds said.

That's not the only topic the five seem to have a consensus.

Park Hill Golf Course was just sold last week from Clayton Early Learning to developer Westside Investment Partners. The city attorney's office believes that Westside must abide by an agreement that Clayton was bound by, to have an 18-hole golf course on that property.

None of the five new council members believe that Park Hill Golf Course should remain a golf course.

All five new council members believe that it should not be developed, instead wanting open space.

"What the voters said and what we said through our races, through these historic runs, was that we need to be growing responsibly," CdeBaca said. "You have people here who were forced to run because of the conditions in our city and I expect to see a lot of the people who were newly elected, in different configurations, with people who are incumbents, making sure that we do hold the administration accountable. And I think there are more adults in the room, honestly."

"There's a comradery here for all of us that are brand new at this," Torres said. "For me personally, I think there will be any number of blocks, alliances, partnerships, collaborations, but it will depend on the issue."

"I don't feel the pressure to be different than councilwoman (Mary Beth) Susman, I feel the pressure to represent our community to the best of my ability, and to make sure that every Monday night when I go home, I can hold my head high and be proud of the job I did that day," she said.

Sandoval, who was the chief of staff for Espinoza, said she might follow in his footsteps as being a lone dissenter.

"I would like to work in opposition. I'm not for everything definitely, but I also think there's a different way of going about doing that," Sandoval said.

"Should we be the lone dissenting voice, I wouldn't agree with that. Ultimately, our job in city council is to create relationships where we effectively would be in the majority," Hinds said. "People don't feel like they're heard, and I think even there's a conversation that will be in our first city council meeting tonight."

At the city county meeting on Monday night, the new council voted on the $94 million dollar expansion of Peña Boulevard to and from Denver International Airport. A decision that will impact people beyond the Denver city limits.

"When we are talking about decisions that are related to the airport, we have to take, not only other counties in the state of Colorado into consideration, but also people who are potentially driving here or whatever from other states," Sandoval said. "[People] come from all over to use our airport and it’s a part of Denver which gives us a responsibility to consider those other things sometimes."

All five agreed that Denver should not follow Lakewood's lead and have a growth ban. On July 2, Lakewood voters passed an ordinance limiting growth to one percent each year. CdeBaca said it's not council's place to say no, and that if voters wanted to put that on a ballot, they shouldn't get in the way of that decision.

The one major difference the five new council members had was in their advice to mayor Michael Hancock in his final term.

"Our community gave him another chance and they did so because he made a lot of promises to essentially repent for what has not been done and I think it would be very wise for him to make sure that he fulfills the promises during this final campaign trail," CdeBaca said.

"Just to remember the people who don't have a voice," Sandoval said. "In northwest Denver there are a lot of people who feel their voices have not been heard by this administration, and so don't forget the little people."

"I'm really excited to work with the mayor. My piece of advice is we're not going to be pushovers," Hinds said.