Amazon likes what Colorado has to offer, but what if it wants more? 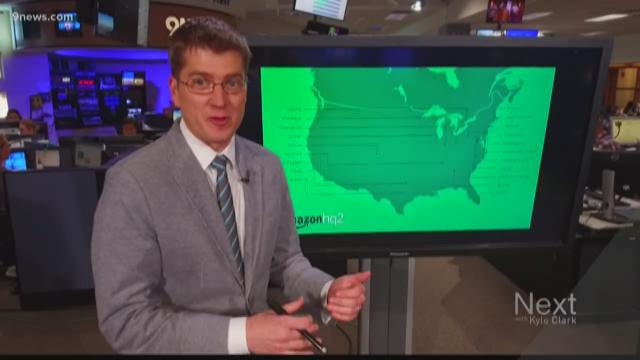 Colorado has pretty mountains, a cool beer scene, and a great workforce.

Amazon wouldn't mind all that. But what if there's something it wants more?

Something like, say, a TRUCKLOAD of United States Dollars?

Big companies expect that sort of thing lately. If you're massive enough, all you have to do is pit a group of cities and states against each other and one of them is bound to give you a giant tax break in the name of bringing in new jobs.

Amazon's newly-released map of 20 finalist cities signals that they'd like to be on the East coast, but more importantly it encourages another round of bidding.

Today we are announcing the communities that will proceed to the next step in the HQ2 process. Getting from 238 to 20 was very tough – all the proposals showed tremendous enthusiasm and creativity https://t.co/x1bFYbk4Ui pic.twitter.com/J2x0HHzBTR

Today we are announcing the communities that will proceed to the next step in the HQ2 process. Getting from 238 to 20 was very tough – all the proposals showed tremendous enthusiasm and creativity https://t.co/x1bFYbk4Ui pic.twitter.com/J2x0HHzBTR

No one knows if we’ll have more rounds of supposed “finalist” cities before this deal is done.

Either way, there's a problem for Colorado here. We’ve already given our best offer.

“We don't buy companies,” said JJ Ament, who heads Denver Metro Economic Development Corporation, the group that put in Denver's bid. “We don't have to compete with temporary financial incentives. We have a whole bunch of things that we believe are more important in the long run for any company's success.”

That's a nicer way of saying that if it's all about money, we're gonna lose.

Here's why. Just before the end of 2017, Colorado finalized its biggest incentive offer to date: $34 million to Charter cable, if the company bring the jobs it said it would.

Nevada recently ponied up $1.25 billion for Tesla to build a battery factory near Reno.

And for Amazon-- New Jersey is already offering $7 billion in tax incentives.

That's about an entire year's worth of what we all pay in Colorado state income tax.

The bottom line: If money can buy Amazon's love, they'll probably get plenty.

If they love the mountains and the beer and the workforce?

They can either put a ring on it, or we can just stay friends.