Evan Gill set out to become the first African American to climb all of Colorado's 14,000-foot peaks -- a goal Micahel Richardson achieved in 1995. 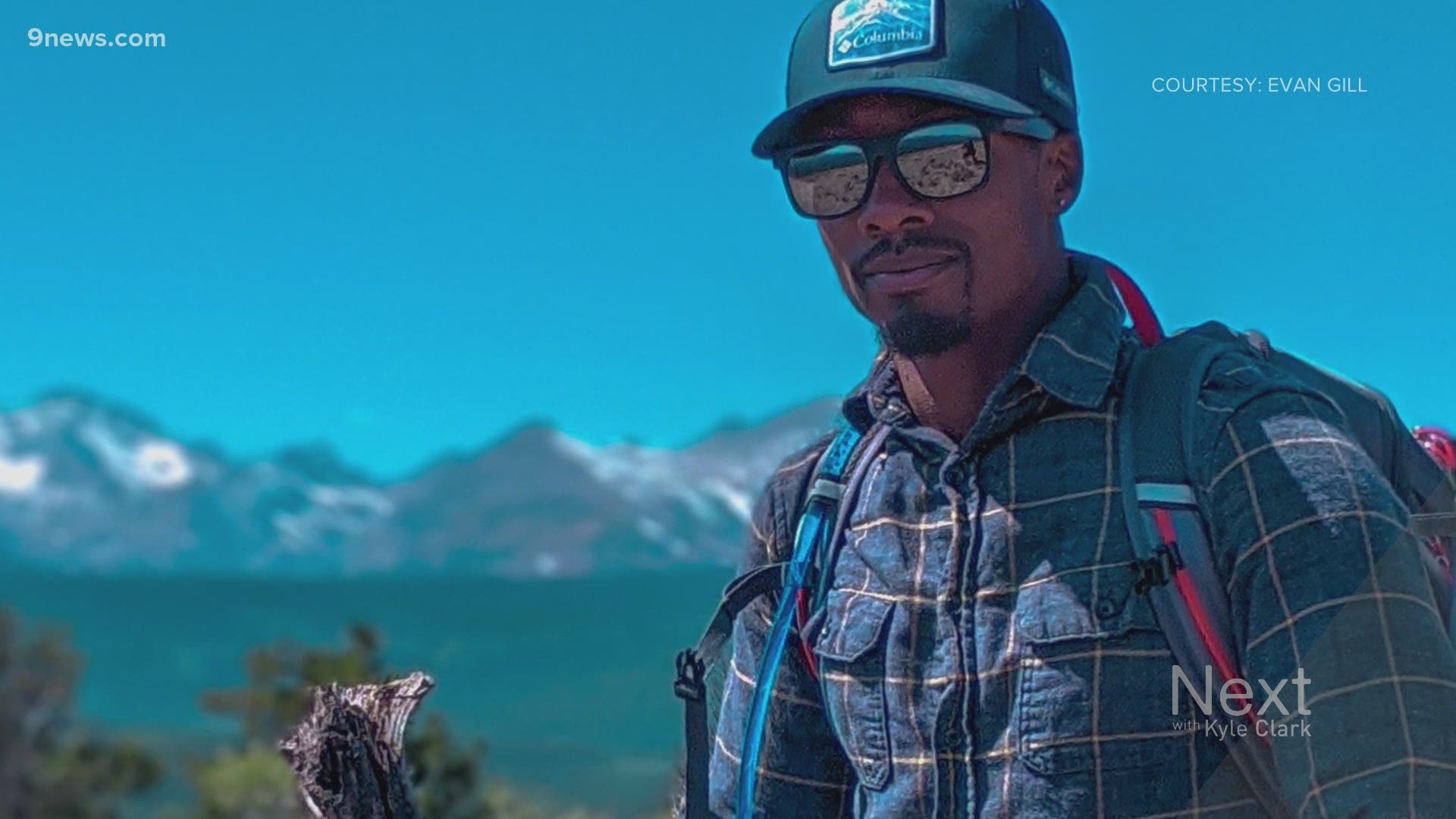 ENGLEWOOD, Colo. — EDITORS NOTE: This original article shared the story of Evan Gill, who set out to become the first Black man to summit all of Colorado's 14ers. After seeing the story, the man who officially achieved that goal in 1995, Michael Richardson, reached out to discuss his own journey. The article has been supplemented to include his story.

Evan Gill knew he wanted to climb mountains as soon as he saw the Front Range looming over the horizon on his move from Baltimore to Colorado.

As he began researching, Gill realized that if he climbed every 14,000-foot mountain in Colorado, he could be the first Black man in the state to do so. He googled, Bing-ed, and Yahoo-ed, and he searched through Colorado14ers.com's forums. Not a single record of a Black person summiting every 14er popped up in his searches.

"You think about it, doing the first thing of something, and it blows your mind that someone hasn't done it yet," he said.

So he made it his goal to be a pioneer for his community.

"Thought that was a challenge enough, but wanted to see more," he said.

Coincidentally, Mount Elbert was the first 14er Michael Richardson climbed in Colorado, as well. Per newspaper records, Richardson is actually the first Black man to have achieved the goal Gill is currently working toward.

“I had always seen the mountains in movies and stuff. It was just one of those magical places to me," he said.

Richardson climbed Mount Elbert in 1976. He continued to climb every 14er on record, using the Colorado Mountain Club manual as his guide.

"My lungs caught fire the first couple of times. I thought I was going to die. You make the adjustment and then carry on," he said.

It wasn't until Richardson had already summited most of those peaks that he learned no Black man was known to have been to the top of each of Colorado's 14ers. Another Black man Richardson met during his treks told him about the unclaimed record. 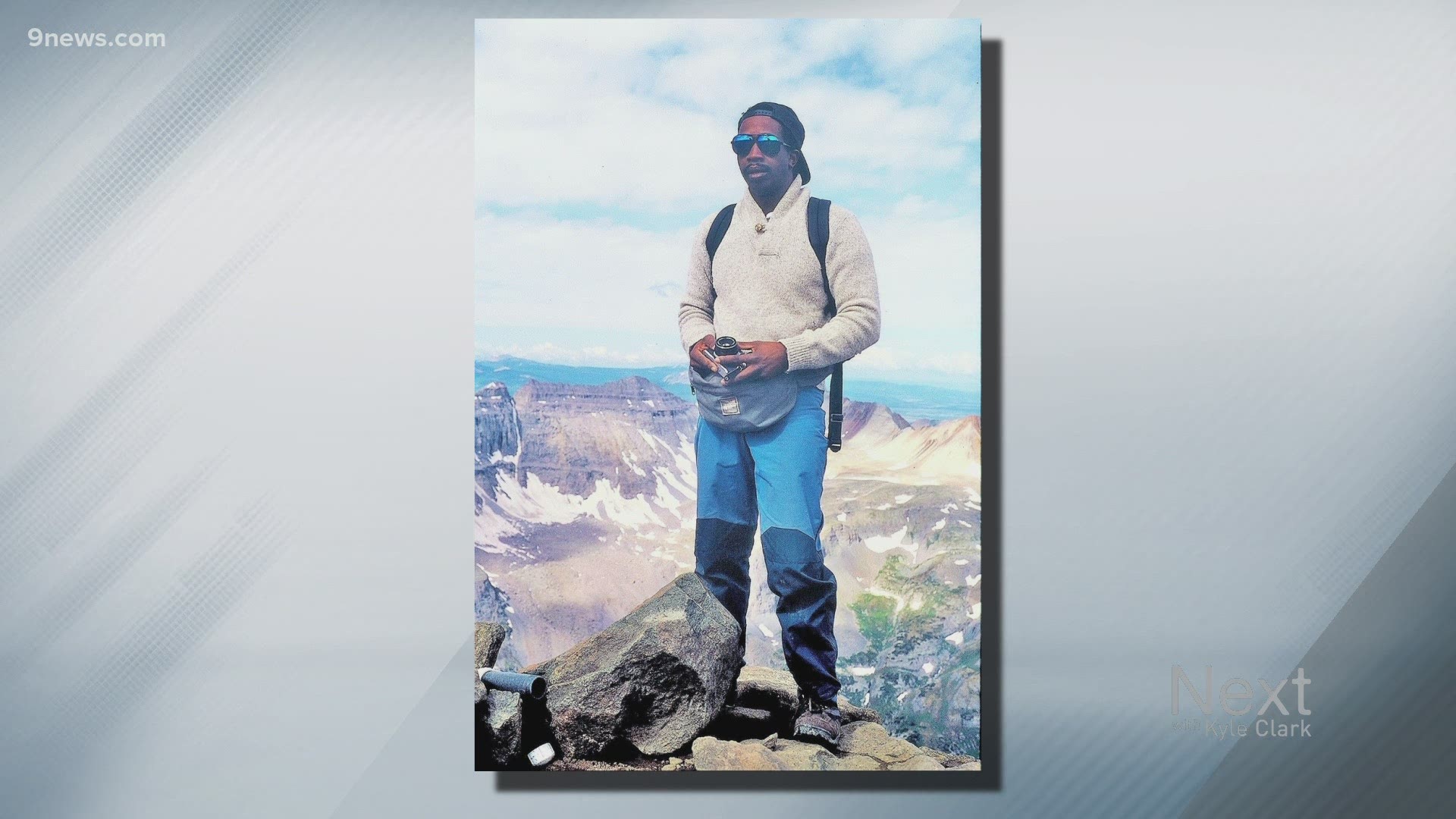 "I was just doing it for kicks. I wasn’t racing or anything. It was more, what can I see, the mental experience," he said. "Just being out there in God’s country."

He finished in 1995, and then went beyond the original goal, setting out to summit Colorado's 100's highest peaks. He made it through 82 before work took him out-of-state. He has since moved back to Colorado and is currently helping prepare his grandson to begin hiking as he did.

To Richardson's knowledge, three Black men in total have summited each of the state's 14ers. He was the first to do it, per the old Rocky Mountain News and according to official records kept by Colorado Mountain Club.

“It was uncomfortable simply because people were giving me notoriety for that as opposed to me just doing something I love to do," Richardson said of the attention he got for the achievement, though it was no surprise to him that someone else had not yet conquered all of these peaks.

To see another person of color in rural Colorado was rare, he said.

"There’s fear, maybe an underlying fear, of venturing into white spaces that have been predominantly white spaces – and you don’t know how you’re going to be perceived in those spaces," Richardson said.

Richardson saw our original story on Gill and hopes Gill continues on with his goal to inspire other Black people to hike.

"Forge on. Definitely. And let people know what you're doing," he said. "Connect with as many of the outdoor groups as possible -- not only the Black groups, but the Latino groups, the white groups. Get your message out there."

After starting in June, Gill has bagged 24 14ers so far. He plans to finish his journey by the end of next year.

The former Army Chemical, Biological, Radiological and Nuclear Specialist says reaching these peaks helps him battle post-traumatic stress disorder, and brings him far away from the onslaught of negativity 14,000 feet below.

But, most of all, he wants to inspire more people of color to get outside and take advantage of what his new home state has to offer.

"What I want to preach and to influence other people in the colored community is to go out and step outdoors and to enjoy what is free right next to us," he said.

Gill is steadily growing a following on Instagram and Facebook, but he isn't sponsored and is funding this goal out of his own pockets.

The price tag to get started climbing and hiking is one of the reasons Gill says more Black people haven't already become part of the 14er community.

"It takes a lot of time, and luckily financially I'm OK right now, but it does take a lot of time and gas money and money," he said. "There [are] challenges there for my community just to feel comfortable going out and camping and sometimes being alone for more than one day. I really want people to understand and live through my journey if I'm comfortable they're comfortable."

Like Richardson, Gill says he doesn't run into many people that look like him on the trail, and that can be another barrier to entry for people of color. But, he says the outdoor community has more than welcoming.

"It's a breath of fresh air for some of them to actually see that their community is growing into our community," he said.

If he can inspire a few more people to get those communities to mix even more, Gill says it would mean everything

"I would love to see people of my community to go out and actually attempt these 14ers. It's no reason why we can't, it's nothing special. It takes guts and grit to get up there," he said.

That mission, and his family's support, keep him going through the steepest ascents. And through it all, he never forgets the city he left to reach these peaks.