The state got RTD's attention by threatening to withhold millions in federal aid unless they restarted bus lines to Boulder and Longmont. 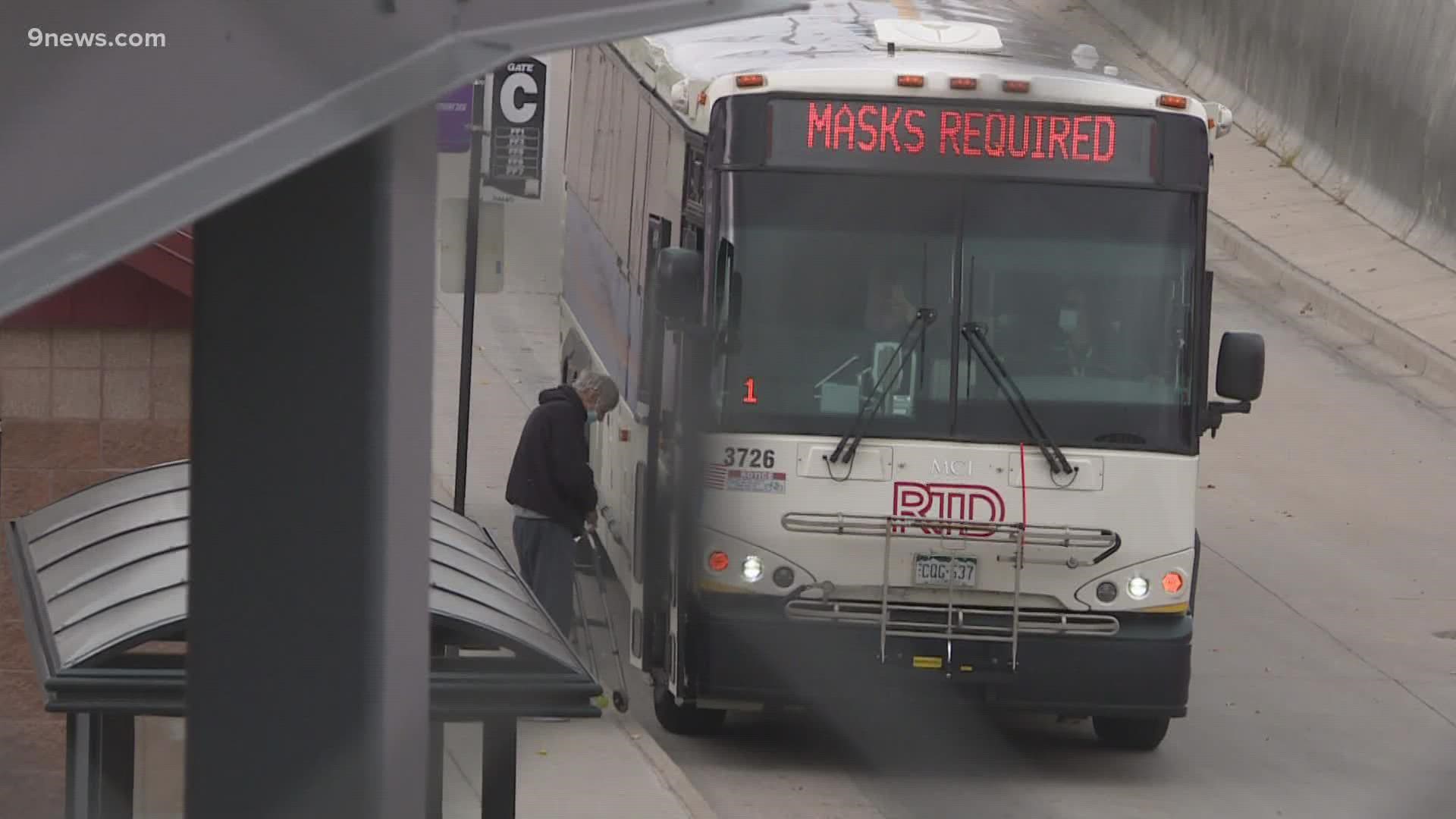 BOULDER, Colo. — After the executive director of the Colorado Dept. of Transportation's (CDOT) threatened to withhold $34 million in federal funds from the Regional Transportation District (RTD), Boulder County leaders said they’d reached an agreement with the transit agency to secure the funding Tuesday.

According to Kathleen Bracke, deputy director of transportation planning for the county, under the new agreement Boulder County would receive the money then work with RTD and other local government agencies to restart transit lines suspended during the pandemic.

RTD spokeswoman Pauline Haberman said she was unaware of an agreement with 9NEWS reached out for comment, but RTD’s elected board was scheduled to discuss federal relief funds during an executive session of tonight’s regular meeting.

The agreement comes a week after CDOT’s executive director Shoshana Lew wrote to RTD threatening to withhold the funding if the agency didn’t commit to restarting four bus routes shuttered during the pandemic: Flatiron Flyer 2 and Flatiron Flyer 4, which each run along U.S. 36 and LX 1 and 2, two express bus lines from Longmont to downtown Denver.

As the executive director of CDOT, Lew said she serves as the governor’s representative to allocate the federal funds.

“These regional Routes are essential to the mobility of Coloradans in the urbanized areas for which these federal UZA funds were explicitly provided,” Lew wrote in the October 19 letter. “These rapidly became amongst the most successful routes in the region, and one of the premier examples of how transit can be successfully integrated into the state highway system to provide Coloradans with cleaner, better options that improve their commutes and quality of life, and anchor transit oriented development.”

But many transit advocates and even an RTD board member pushed back, accusing Lew of using the funds to ransom policy.

RTD’s district B director Shontel Lewis wrote about her opposition to Lew’s letter in an op-ed in the Denver Post, accusing Lew, who was appointed to her role, of trying to supersede an elected body.

“There’s a lot to be considered when you’re restoring services…the requirement to do a Title VI equity analysis,” Lewis told 9NEWS Tuesday.

Lewis said the majority of the corridors along the routes Lew requested reopened aren’t considered equity priorities for RTD, meaning they don’t fall in low income or communities of color where people tend to rely more on transit. And with a current operator shortage, if the agency has to reallocate resources to reopen these routes, it may impact communities who continue to need transit.

“We don’t have enough operators,” Lewis said. “And so when we’re talking about adding service or reinstating service we have to do so in a way that understands the impact to not only our budget but to our human capital.”

RELATED: More passengers are riding buses and trains, but RTD doesn't have the drivers to restore service to pre-COVID levels