Who do you call about your problems with CDLE's out-of-state call center?

The Colorado Department of Labor and Employment hired a Florida-based call center in April to help with unemployment questions. But people have some complaints. 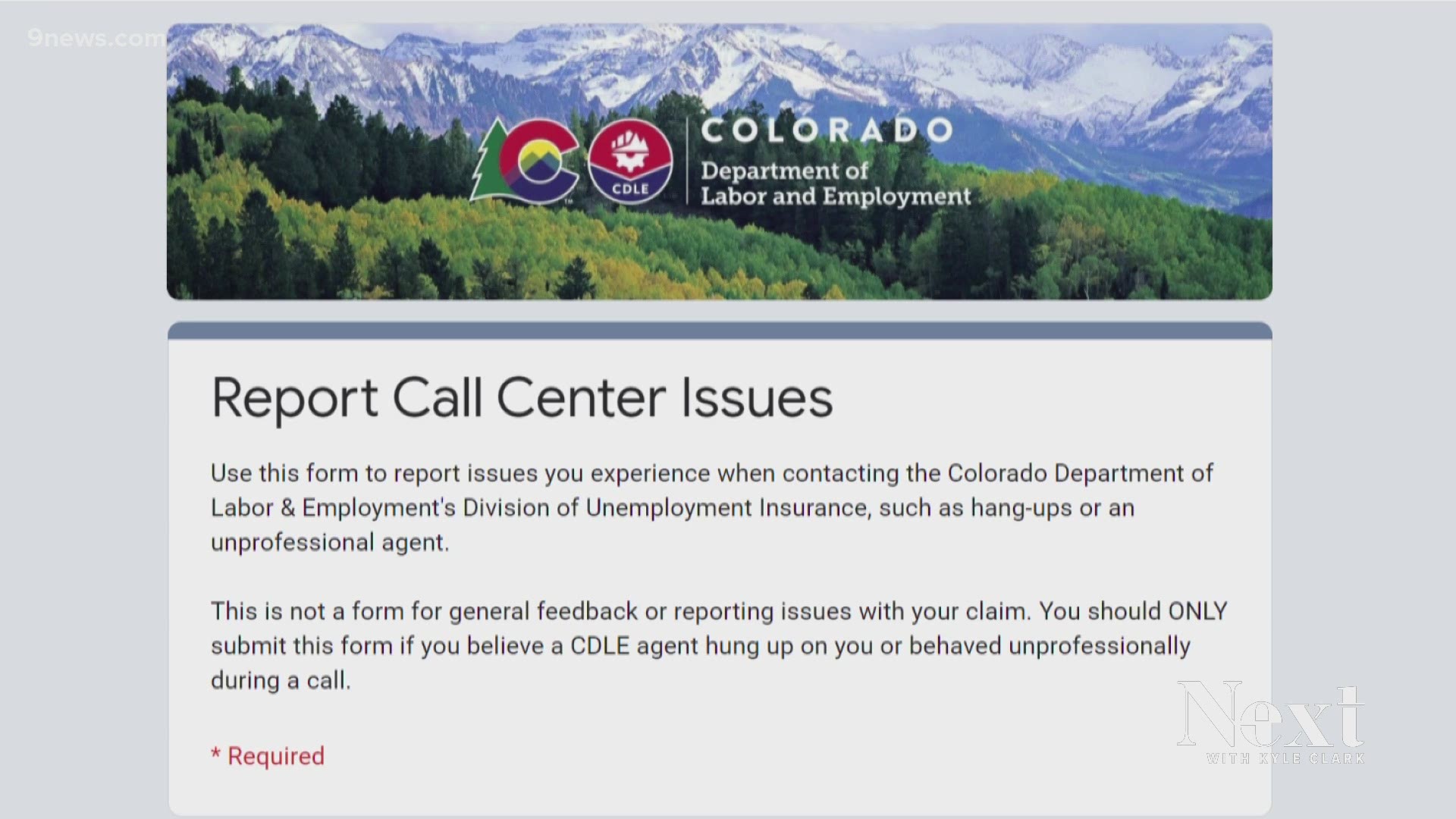 DENVER — Out-of-staters are making Coloradans mad in a new way.

The Colorado Department of Labor and Employment (CDLE) hired a Florida-based call center in April to help with unemployment questions. The initial contract was for $700,000. It has been amended nine times and now totals $10.5 million.

"We have little faith in the call center right now," said Erin Joy Swank, moderator of the Colorado Unemployment Facebook page, where members help each other with unemployment questions.

"We get more answers, a lot of times, in our own group," said Swank.

A CDLE spokeswoman said that the call center is paid for with federal funding.

"The third-party call center was used to support the federal PUA (pandemic unemployment assistance) program for the first nine months through January 2021 and was paid exclusively with federal funds," CDLE said in a statement. "Federal funding levels increased throughout the year providing funds to support these critical extensions. And the Continued Assistance Act provided additional funding to states and extensions for the use of non-merit staff, along with the continuation of the extended benefits programs which sustained the demand."

Over the weekend, when Colorado started paying Phase Two claimants -- people who exhausted their benefits prior to or since Dec. 26 -- the call center phone line was slammed.

CDLE reported 256,000 calls to the call center from 19,000 specific numbers. The average wait time over the weekend was 50 minutes.

"There are certain calls that the Conversion Call Center simply does not have the capability to address and handle that our own internal staff would have far more knowledge and be able to handle," said CDLE Acting Unemployment Director Phil Spesshardt. "We are still working to increase the number of staff that are within our own CDLE call center to provide those callbacks."

RELATED: Colorado's unemployment system: 1-on-1 with the man in charge

In an interview with Next with Kyle Clark last week, CDLE executive director Joe Barela explained the need for an out-of-state call center that might have people not fully invested in helping people in Colorado.

"Those are choices we had to make on the fly, we are re-evaluating that decision. I can tell you we needed a release valve," said Barela. "They were trained to help people reapply or open a new claim in the new system."

The CDLE unemployment website has also added a complaint form to report issues with the call center.

"That is directly out of the meeting that we had, between myself and the moderator of the other Facebook group (with CDLE)," said Swank. "Many times they are hung up on. Today, there's people getting dead air and they don't know whether to stay on or not, and most of the time after the dead air they do, still, get hung up on."

The form to report call center issues has a drop-down for just two issues, but neither are great: "While speaking with an agent, the agent hung up on me" or "Unprofessional agent."

"I think the unprofessional part has gone down, but we're certainly still getting the hang-ups, but now we have a way to report it," said Swank.