A school board candidate leading an anti-mask campaign in Colorado is suing the Cherry Creek School District for forcing her to wear a mask at candidate forums. 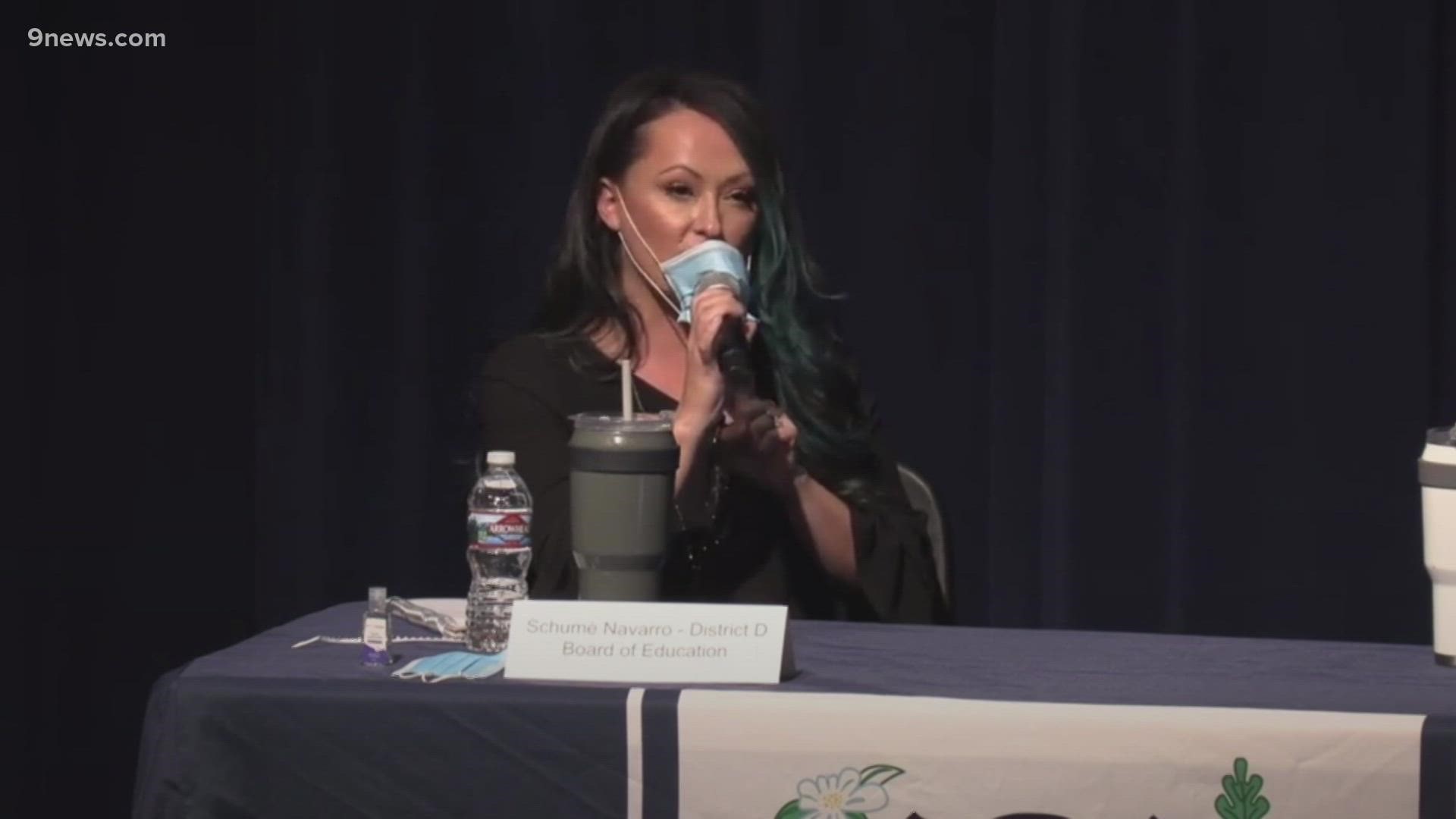 DENVER — Schumé Navarro, a candidate for the Cherry Creek School District (CCSD) Board of Education who has gained attention for opposing school mask requirements and her embrace of QAnon conspiracies, is now suing the district seeking a personal mask exemption.

In court documents, Navarro said she has two diagnosed disabilities that prevent her from wearing a mask, and therefore, prevent her from participating in candidate forums where masks are required. Her conditions, the complaint said, stem from trauma suffered as a child that now prompts panic when her mouth and nose are covered. Navarro said she also has a nasal deformity that makes breathing difficult, regardless of a mask.

Navarro said she has already missed two candidate forums because of the mask policy. When she did put on a district-provided mask at a forum on Sept. 14, the complaint said Navarro had difficulty breathing and she suffered “substantial anxiety” and “overwhelming distraction.”

Navarro frequently steered questions back to her campaign theme of parental choice but made one eyebrow raising comment suggesting that some students of color aren't cut out to succeed academically.

Asked to address disparities for students of color, she said, "Some people have a different skill set than academics."

"I have enjoyed this conversation of equity and diversity, but I am sorry. I am sitting here, I am struggling with this thing," Navarro said in her closing remarks. "I can’t really think in this space, and I’m so sorry I can’t offer more. And it’s because I’m here for choice, guys."

The court documents alleged the school district refused to make accommodations for Navarro's disabilities. According to Navarro, she provided an exemption from her counselor, but Cherry Creek Schools denied the exemption because her counselor did not meet the definition of a "Colorado licensed medical provider."

Navarro is suing to force CCSD to provide accommodations for candidate forums, plus fines and damages. In a phone call with 9NEWS, an attorney for Navarro would not indicate whether she would consider teleconferencing to be a fair solution.

In a statement, Cherry Creek Schools said "the district disputes the allegations in the complaint and intends to vigorously defend this case."

Navarro's attorney stressed to 9NEWS that this lawsuit is seeking a personal mask exemption for medical reasons, and it is separate from Navarro's prominent political advocacy against mask mandates in Colorado's schools.

Navarro has gained a following in conservative circles because of that opposition to masks and for promoting QAnon conspiracy theories, saying that President Joe Biden was fraudulently elected in a "coup" by China linked to the COVID-19 pandemic. After being in Washington, D.C. during the Jan. 6 attack on the U.S. Capitol, she also described "all-out war" with satanic communism.

"Schumé exemplifies exactly what it means to jump in head first without looking back," the head of the Colorado Republican Party, Kristi Burton Brown, said.

RELATED: State can test 40k people per day for COVID-19