Numbers show that as the population of Denver went up, the number of homeless in the city went down. 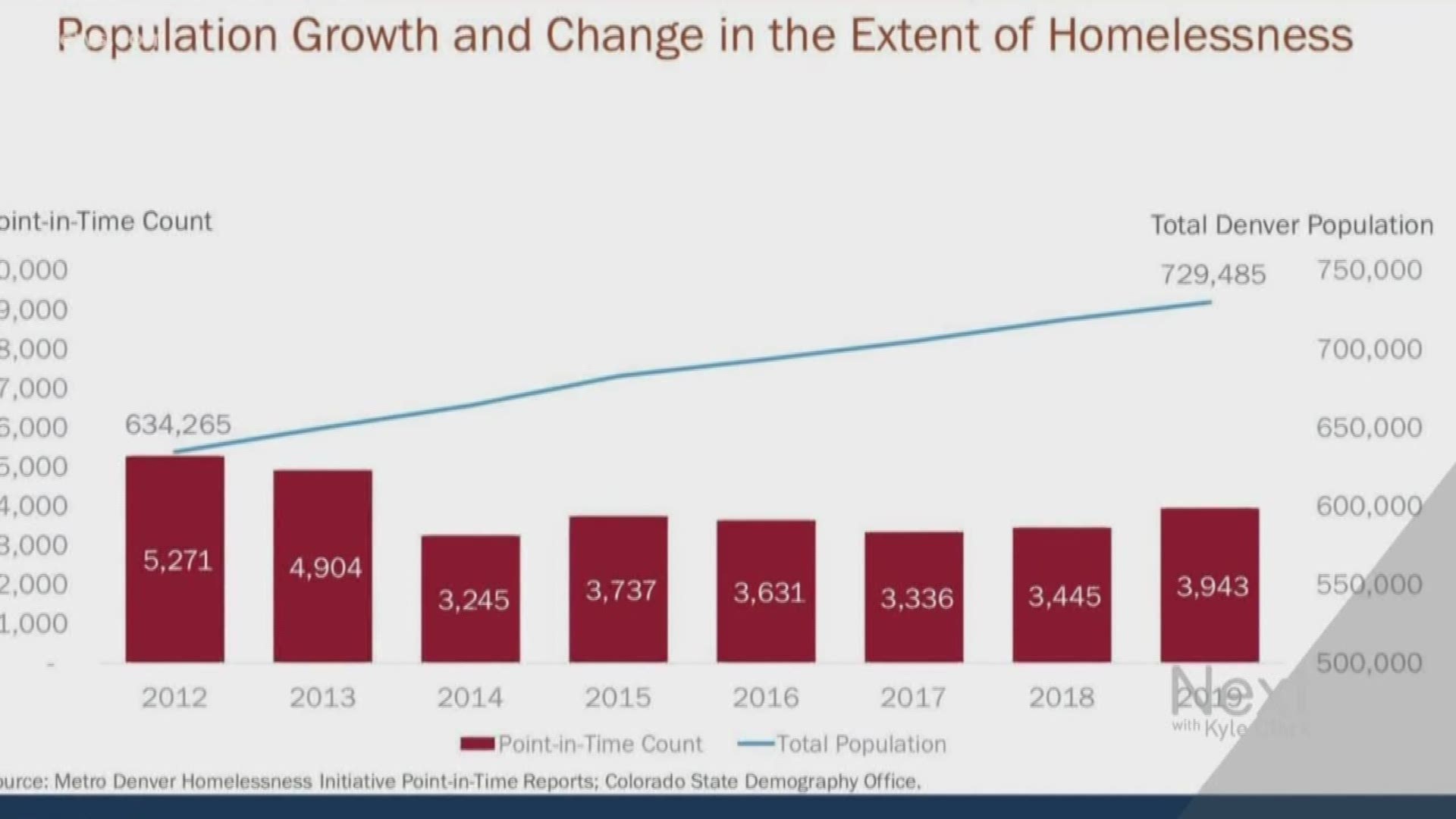 DENVER — Since marijuana was legalized, we've heard claims that it brought a bunch of people who are homeless to Denver. That's not what new statistics suggest, but the numbers could use some context.

Friday, the Chief Housing Officer for the Denver Office of Economic Development met with 12 out of 13 city council members to talk about homelessness in the city.

One of the slides included in the presentation, showed a general downward trend in the homeless community population between 2012 and 2019, as the city's population went up.

The Chief Housing Office, Britta Fisher, said the data is pulled from the point in time survey.

She said the federal government redefined homelessness in 2012, narrowing the definition and therefore how many people are counted. However, she also believes some of the city's moves to increase affordable housing have helped decrease homelessness as well.

"Housing is working," Fisher said. "Housing plus services is a combination we know helps people."

At the St. Francis Center, a daytime shelter in downtown Denver, Andrew Spinks said while affordable housing is helping, the city has a long way to go.

"Right now there has been quite a lot of development of affordable housing even though we need a whole lot more," he said. "I think that would maybe contribute to why the point in number has gone down a little bit."

Spinks said the number of people using the shelter have remained relatively stable for several years. He said he is wary that the survey may undercount people.

"Point in time is a bit of an undercount because it's a snapshot," said Spinks. "It just takes a one moment count of everyone who is unhoused in the Denver area, metro Denver. We need more of a video."

"Yes we know if we don't actually talk to someone, count someone, potentially undercount - we do believe that happens to some degree but we believe seeing the overtime number we can see the pattern," Fisher said.

The city said it has been working on improving how they are reaching people, including working with new partners to help.

The data spans a time since recreational marijuana was legalized. At that time there were concerns that it could bring more people who are homeless to Denver.

While the downward trend in numbers seems to contradict that concern, Fisher said the city has known that wasn't the case for years because their data shows many of the people experiencing homelessness are local.

"Those who are unsheltered, living outside or rough sleepers is pretty much similar. Under 600 people over the last seven years," said Fisher.

Spinks said the conversation around this concern was always anecdotal and there was no way to actually record it.

"We don't ask people why they moved into the area," he said, "When we did have those conversations there were some people who said yes that was something they were considering. But generally speaking there was no way of knowing if that was the case. It was anecdotal at best."

However, critics of legalized pot, through a group called Smart Approach to Marijuana, said sales of legalized recreational marijuana didn't really take off until 2014.

Their Chief of Staff, Luke Niforatos, said if you look at the statistics between 2014 and 2019 the numbers slightly grew.

Niforatos said while that's not enough to draw a direct link between the two, they are going to continue to watch the numbers.