A man who threatened Tri-County Health officials with shooting and a "civil war" also sent a threatening message to a Broomfield city council member. 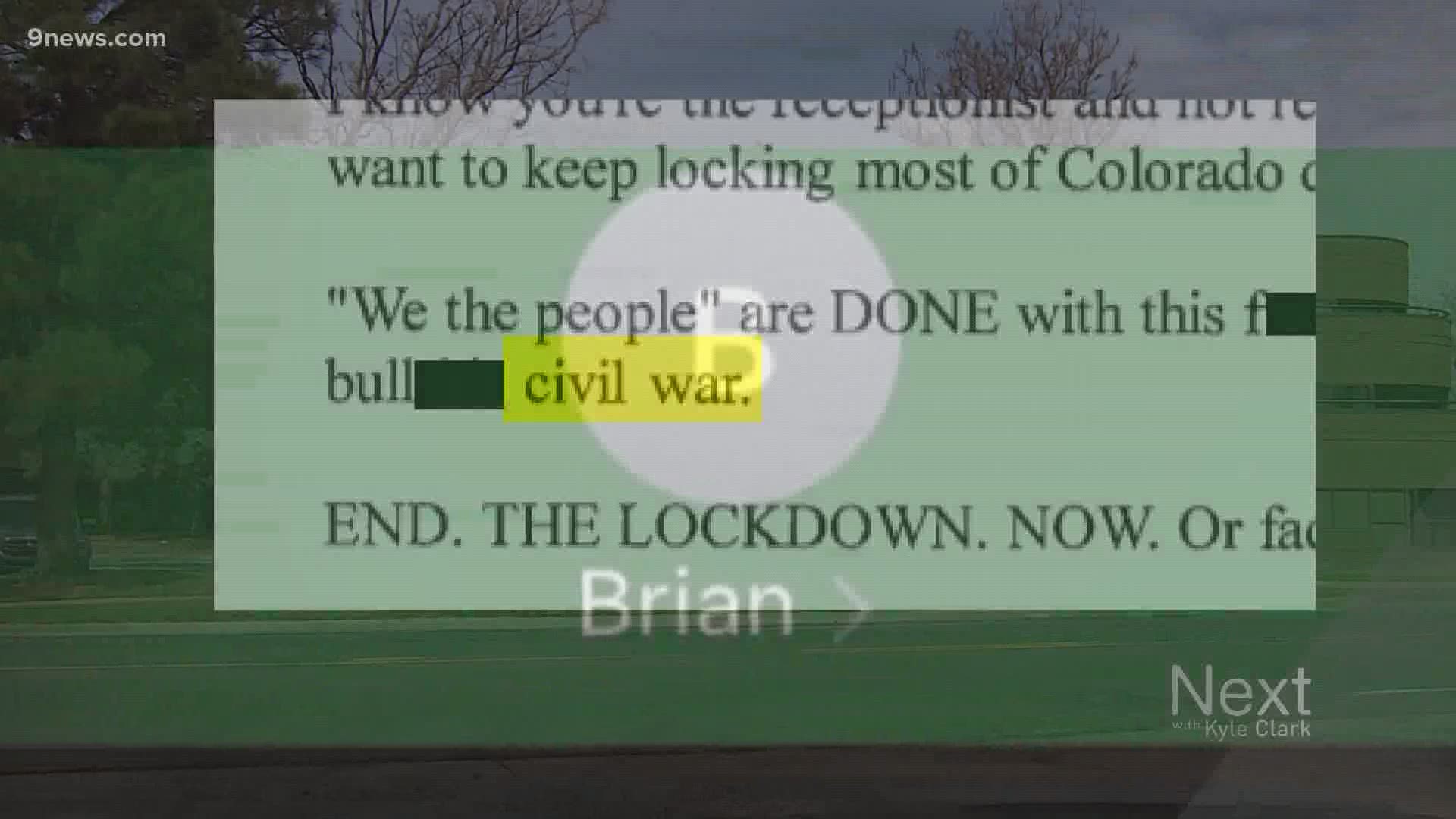 DENVER — The man behind a threat of “shooting” and a “Civil War” if Tri-County Health doesn’t lift a stay home order also emailed a veiled shooting threat to an elected official in Broomfield. Police say neither threat was specific enough to be a crime.

The man who acknowledged to Next with Kyle Clark that he sent the threats was unapologetic and called them “warning signals to elected officials.”

The threatening email to the Tri-County Health Department (TCHD) on Tuesday prompted Greenwood Village Police to increase patrols near the health agency’s headquarters.

“’We the people’ are DONE with this f***ing bulls***, and you're about to start a hot-shooting no bulls*** civil war,” the email read. “END. THE LOCKDOWN. NOW. Or face severe consequences.”

A Greenwood Village Police spokeswoman said the threat was reviewed with prosecutors and deemed not to be “credible.”

Next with Kyle Clark has learned the same man sent a threatening email to Broomfield City Councilwoman Heidi Henkel last week, writing, “I've heard through the grapevine that folks with guns are talking about shooting elected officials… keep that in mind and be a little careful when you drive to and from work, school or other places."

Henkel said she increased security at home as a precaution after receiving the email.

“Free speech without directly making a threat,” Henkel posted on Twitter following Next’s report. “A freedom that my husband fought in Afghanistan to protect while I was home alone raising a toddler and caring for my ailing mother,” Henkel said. The irony isn’t lost on us.”

A Broomfield Police spokeswoman said the threat was not specific enough to constitute a crime.

9NEWS is only identifying the man involved in both incidents by his first name, Brian, because he has not been charged with a crime.

Brian told Next with Kyle Clark that his threats to public officials were "just making them aware of possible consequences from other people."

Brian said that public officials may be “more responsive” after receiving his email threats. He said officials were not responsive after his prior attempts at communication.

On social media, Brian has directed racist comments at Denver Mayor Michael Hancock, who is black, and homophobic comments at Colorado Gov. Jared Polis, who is gay. Both Democrats have been prominent advocates for putting in place, and later lifting, stay-home orders.

Aurora Police are investigating incidents of vandalism at a Tri-County Health office in that city. An Aurora Police spokeswoman said Brian is not a person of interest in those cases.