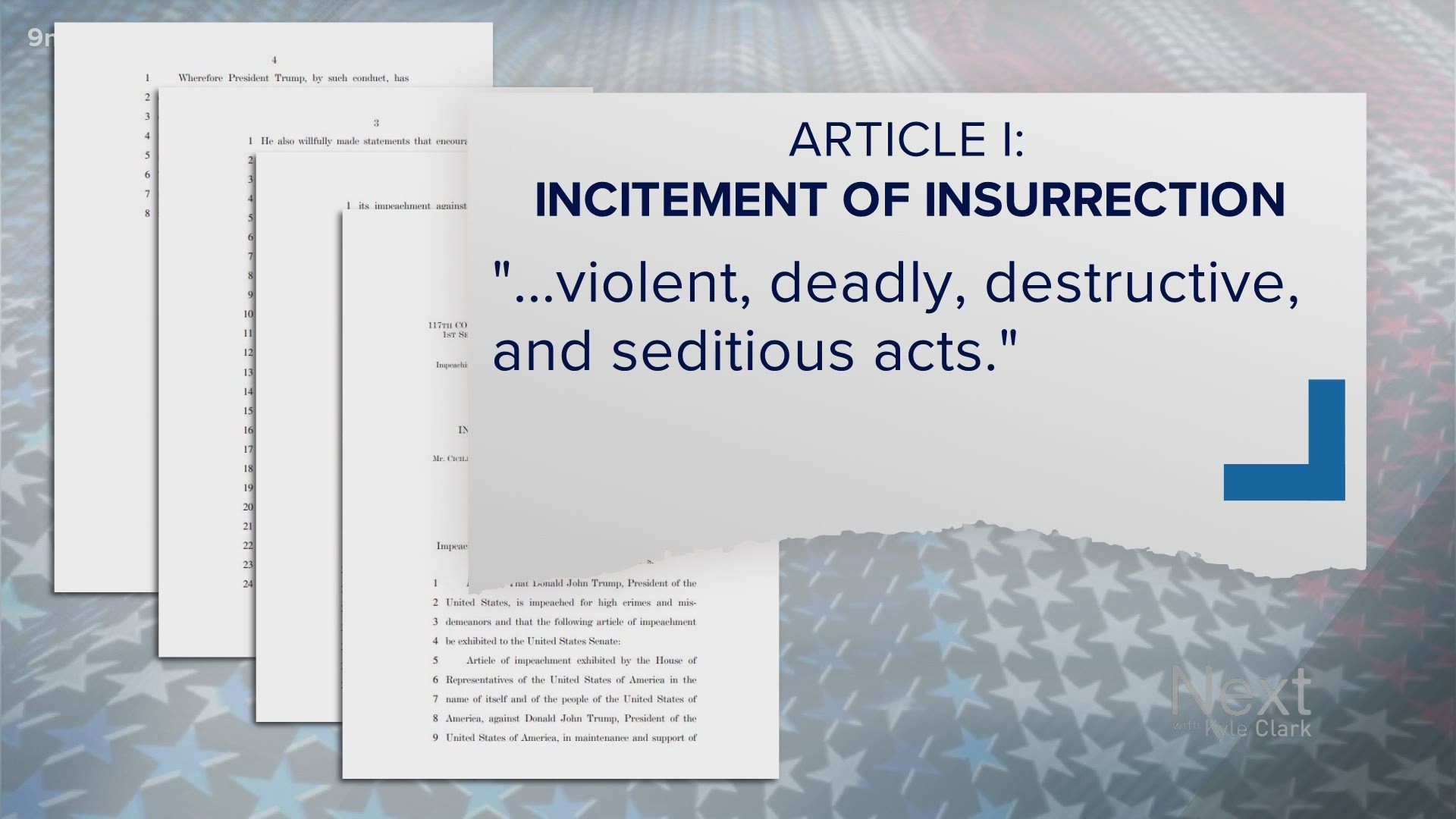 Colorado's longest-serving member of Congress oversaw the impeachment of Trump in December 2019.

"I presided over the last impeachment, I would be happy to get another gavel and really do the job this time," said DeGette.

She has now co-sponsored a resolution with an Article of Impeachment entitled "Incitement of Insurrection."

It states that the president "willfully made statements that encouraged — and foreseeably resulted in — imminent lawless action at the Capitol. Incited by President Trump, a mob unlawfully breached the Capitol, injured law enforcement personnel, menaced Members of Congress and the Vice President, interfered with the Joint Session’s solemn constitutional duty to certify the election results, and engaged in violent, deadly, destructive, and seditious acts."

"We could have that hearing and we could impeach him over the weekend," said DeGette.

While the House of Representatives could hold an impeachment hearing, the Senate would still need to hold a trial and vote on removal from office. In Feb. 2020, the U.S. Senate acquitted the president.

Currently, the Senate is not supposed to be in session again until Jan. 19, one day before Trump's term ends.

"If the House and Senate want to move on something, they can do it. (Sen.) Mitch McConnell could bring the Senate back in," said DeGette.

RELATED: Steps to invoke the 25th Amendment against a president

RELATED: 'We were getting ready to fight:' Rep. Jason Crow describes escaping mob inside U.S. Capitol

As of Thursday, there are just 13 days left until President-Elect Joe Biden is sworn into office.

"Everyone says, 'well, it's only 13 days.' Look at what happened yesterday," said DeGette. "He has the nuclear codes. He has a lot of damage that he can do in 13 days."

Congressman Joe Neguse (D), sits on the House Judiciary Committee, which would hold impeachment hearings. He tweeted: "If the Vice-President and the Cabinet are unwilling to perform their constitutional duty under the 25th Amendment, then the Congress must perform ours and pursue impeachment."

If the Vice-President and the Cabinet are unwilling to perform their constitutional duty under the 25th Amendment, then the Congress must perform ours and pursue impeachment.

Congressman Jason Crow (D) was an impeachment manager in Trump's impeachment trial. He tweeted: "He needs to be removed from office -- whether it be invoking the 25th Amendment or impeachment. We must protect our democracy."

We have known for a long time that Donald Trump is violent and unstable. After what happened yesterday, 13 days is too long.

He needs to be removed from office -- whether it be invoking the 25th Amendment or impeachment. We must protect our democracy.

Congressman Ed Perlmutter (D) has not signed on to any impeachment effort. He tweeted: "…the 25th Amendment is the only way to remove Trump from office immediately."

While the focus must remain on January 20th and the beginning of the Biden-Harris Administration, the 25th Amendment is the only way to remove Trump from office immediately which is why I’m calling on Vice President Pence and the Cabinet to invoke the 25th Amendment today.

"The 25th Amendment is completely appropriate or impeachment. Whatever we can do the fastest that's what we should do to remove him," said DeGette.

Wednesday was the first time DeGette said that she felt unsafe in the Capitol in nearly 20 years.

"I was in my office in the House Office Building, and I saw the second plane hit the Twin Towers, and then we saw the smoke come up from the Pentagon, and we thought they were -- and they were -- coming for the Capitol, that's that last time I felt unsafe," said DeGette.

RELATED: Colorado's Diana DeGette calls for Trump's arrest and impeachment after his supporters storm US Capitol

DeGette escaped the House Chamber Gallery, along with Crow and other members of the House, and was taken down flights of stairs to a secret location.

In a moment of levity, she praised a new exercise regimen.

"One of the things that I've been doing during COVID, is I've been exercising a lot, and I was never so glad of that as when I was running down those eight flights of stairs in my pumps, and then through the tunnels of the Capitol. I thought, 'that workout routine is really paying off,'" said DeGette.

She was taken to a secret location with hundreds of other members of the House.

Late Wednesday night, a Kansas Congressman announced that he had tested positive for COVID-19. DeGette isn't sure if he was in the same area, but she said she wore her mask and would check with the House physician for guidance.

Colorado's Senators, Democrats Michael Bennet and John Hickenlooper, both expressed on Twitter that they, too, want to remove Trump from office.

I believe the president is unfit for office and the administration should invoke the 25th Amendment.

We’re all still shaken from yesterday’s violent attack on the US Capitol.

I’ve long believed that President Trump is unfit for office. He’s on his way out, but I’d support any option to remove him from power faster.