Tons of Coloradans got the COVID exposure tracking app; Are they using it?

More than 1.4 million people in the state have the COVID-19 exposure app on their phones, but much fewer people are using it. 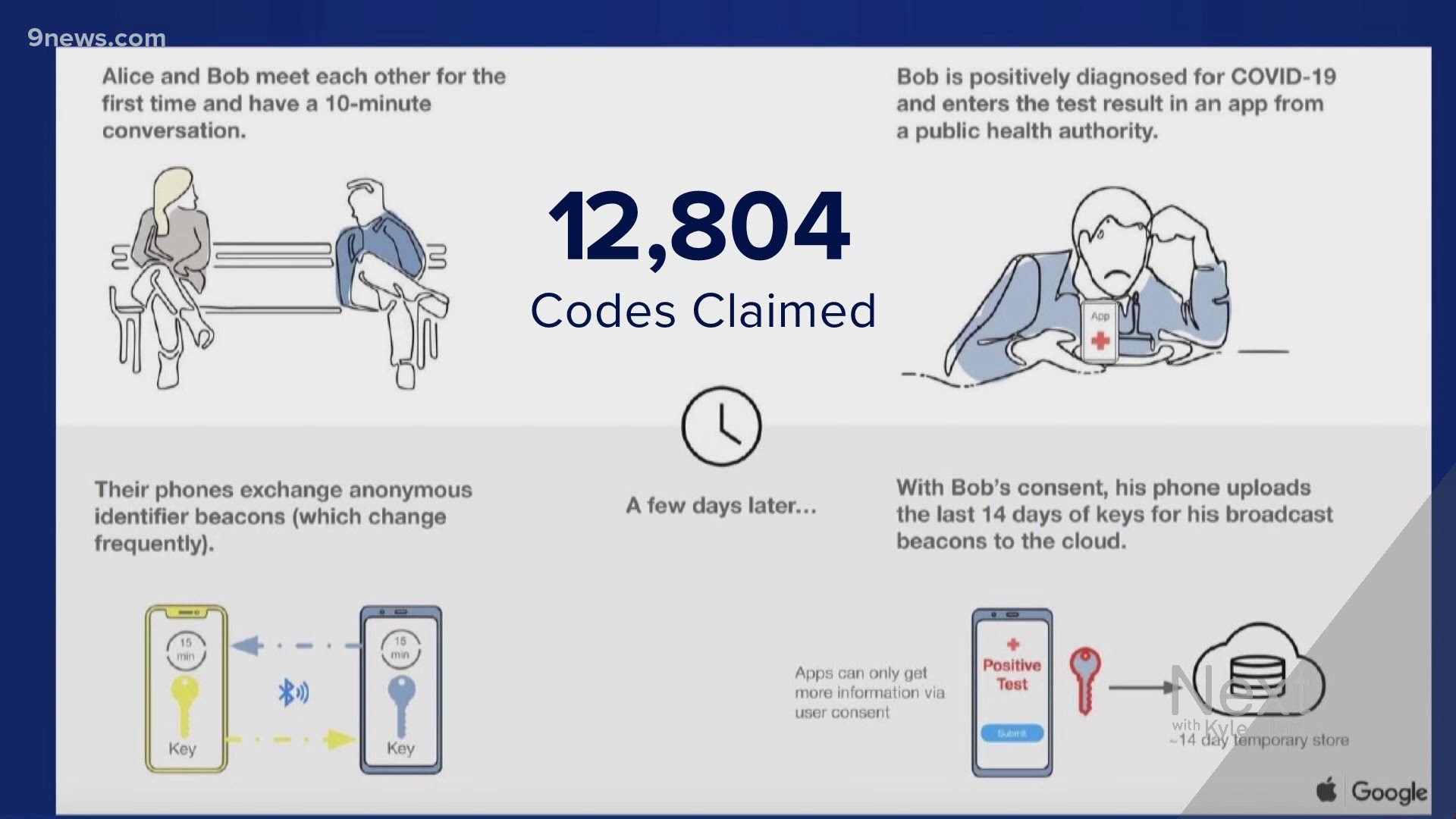 DENVER — There are more than 1.4 million people in Colorado who have the COVID-19 exposure notifications app on their phones.

The state's COVID-19 Innovation Response Team knows that 12,804 people who have tested positive for COVID-19, uploaded their positive test to the app, thus alerting others who may have been exposed.

The app works through Bluetooth, sending anonymous tokens between phones when they're near each other long enough. The app remembers those tokens for two weeks. When someone tests positive for COVID-19, the state provides a code to upload into the app. Tokens sent from that phone to other phones for the last two weeks are notified, and the app alerts the person they were in proximity to someone who has since tested positive for COVID-19.

The state does not have the ability to know who is contacted or how many people are contacted. The data the state has is how many codes it provides to COVID-19 positive people and how many times those codes are uploaded into the app.

The state has issued 148,911 codes. Those codes are sent to the phone number provided when someone gets tested for COVID-19. Those phone numbers could be landlines or cell phones for people who don't have the app. There isn't a clear number of how many people who have the app have used it to alert others of their COVID-19 test and how many choose not to alert.

Based on the 1.4 million people who have downloaded the app, the state believes 168,852 cases of COVID-19 have been avoided.

A University of Arizona study on exposure notification apps concluded that 12% of cases can be prevented.

However, the study provided a caveat.

The prevented cases rely on "the degree to which notified contacts self-quarantine as directed, seek testing, or at least modify their behaviors to reduce onward transmission."

"We see, based upon the testing numbers we have in Colorado; our percent positivity, the feedback we get from our case investigation and contact tracing calls, Coloradans are doing an exceptional job of all of those pieces," said COVID-19 Innovation Response Team Lead Sarah Tuneberg. "We don't have any evidence to suggest that people who enable the service, and then use it to notify the people, that those other people aren't taking the most rigorous precautions."