Colorado energy companies spent $755M in cold snap, say it could have been worse

State utility regulators are asking for transparency. Why did four Colorado energy companies spend a combined three-quarters of a billion dollars extra on gas? 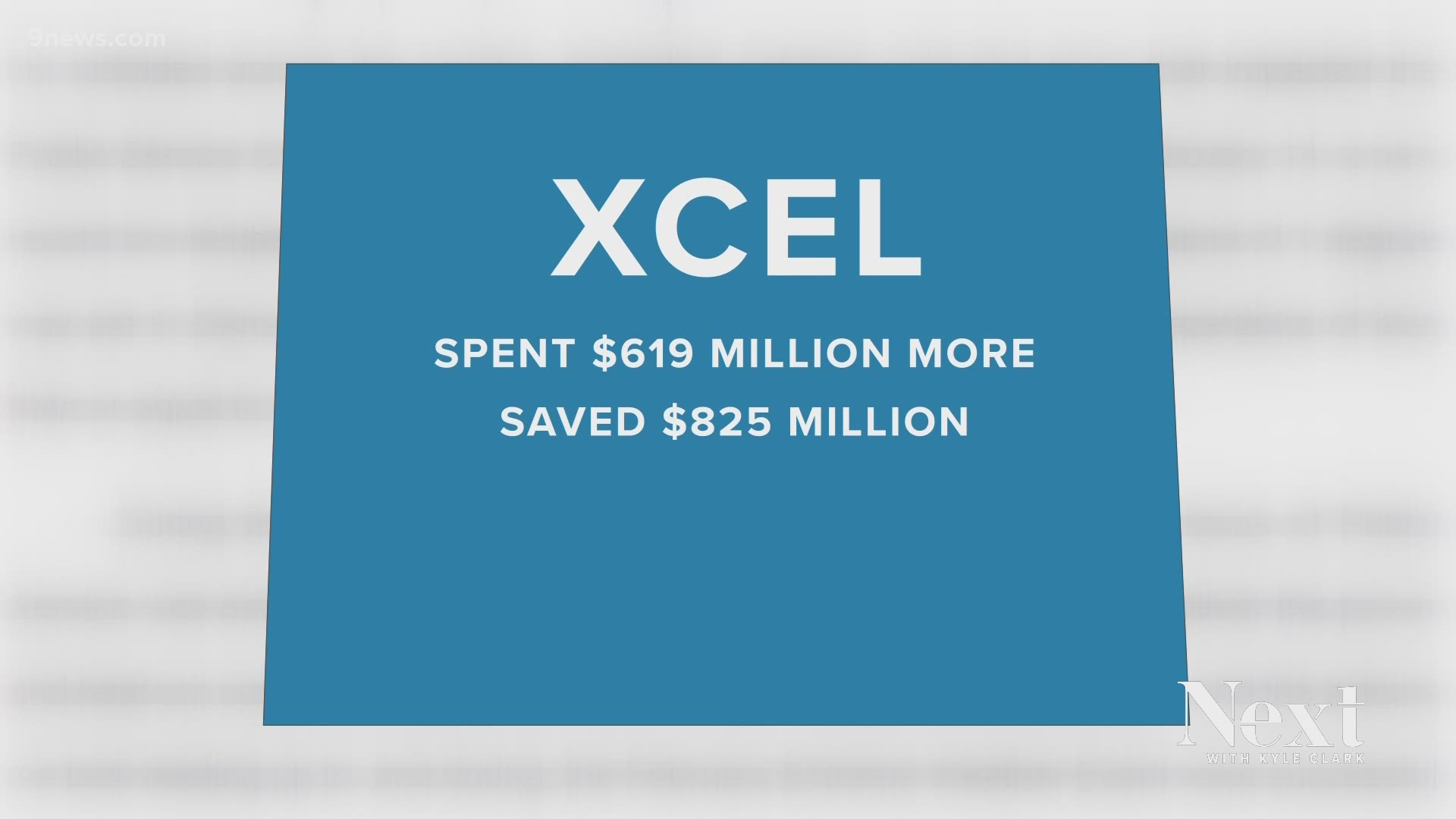 DENVER — Colorado's four main energy companies spent a combined $755 million on natural gas over four days in mid-February when it was at or below 0 degrees.

The costs were spelled out in the explanations provided to state regulators, the Colorado Public Utilities Commission (PUC).

The PUC requested numerous answers from the utility companies following a cold spell that resulted in some natural gas purchases at 100 times the normal price.

The filings were due to the PUC on Friday. Xcel Energy and Atmos Energy had their responses posted to the public database by Friday.

Black Hills Energy and Colorado Natural Gas did not have the filings posted until Monday morning. A spokesman for the PUC said it wasn't clear if the responses arrived late or simply weren't posted online by Friday, and that there would likely be no consequences from the PUC.

Xcel and Black Hills both reported that while the companies spent three-figure millions on natural gas and electricity, the cost to consumers could have been worse if not for planning and practices.

When added together, Xcel said the "extreme weather" event required an additional $619.1 million to be spent on higher fuel prices.

Xcel also defended its business practices, saying it saved customers from even more money having to be spent.

"We followed Commission-approved natural gas price hedging policies to reduce the impact of price surges. These policies were successful, sourcing approximately 67 percent of the gas we provided to our natural gas customers and 35 percent of the gas required to generate electricity through long-term sources, saving customers more than $825 million over the four days," Xcel wrote in its filing to the PUC.

"Hedging really is just protecting yourself from losses with balancing contracts," said Bresee Carlson, an oil and gas attorney and adjunct professor of oil and gas law at Western Colorado University in Gunnison.

Hedging is essentially locking in a set price for a set amount ahead of time. Buy too much, and you have a supply you don't need. Depending on the need at that time, it could be a big win if other companies need your supply, or a loss if you're stuck with a product you don't need. Buy too little, and you're at the mercy of the spot market, just like what happened in mid-February.

"The way a utility company structures its contracts, makes its predictions for usage, and also allocates and plans for expenditures, is really part of the inner workings of that utility that is hopefully going to make it successful," said Carlson.

It also told the PUC that its business practices helped save a combined $68.5 million.

"When we are looking at a 'it could have been worse defense,' maybe that is a good enough defense for many if they think the priorities justify the outcome," said Carlson.

Atmos Energy reported a cost of $26 million, but did not indicate any savings that were realized.

Colorado Natural Gas reported a cost of $5.8 million and also did not report any savings from previous actions.

The PUC will take up this issue during its meeting on Wednesday.

In its filing, Xcel said that the timing of the cold spell, just before a holiday weekend impacted the situation.

"Because of the President's Day holiday on February 15, no day-ahead gas markets were open, meaning that any necessary gas purchases for February 16 (Tuesday) had to be made on February 12," Xcel wrote in the filing.

Xcel said that it did not utilize reverse notifications because the issue wasn't about a risk of forced outages.

It also admitted that even if customers conserved, it might not have mattered.

"We could not reasonably and responsibly have purchased materially lower amounts of natural gas going into Presidents’ Day Weekend on the hope that customers would respond to such appeals -- particularly given the historically cold temperatures. Nor would such appeals have given customers the optionality to avoid the high market prices, because in order to avoid the higher market prices, the daily volumes purchased ahead of the market price being set would have had to be avoided – a virtual impossibility. Moreover, conservation measures taken by customers over Presidents’ Day Weekend would not have materially lowered their bills because fuel costs on customer bills do not reflect real-time market prices," Xcel wrote.

Essentially, Xcel said it couldn't have purchased a lesser amount of gas on the belief that customers would conserve because if they didn't conserve and the purchases weren't made ahead of the holiday weekend, the system wouldn't have had enough fuel.

"Had the Company not made this four-day block purchase, it would have faced a substantial risk of having inadequate gas supply over the weekend and very likely could have compromised our ability to maintain electric and gas service for our customers," Xcel wrote.

In its filings, Black Hills explained that it doesn't have a policy for gas reserves, meaning gas purchased beyond forecasted loads.

"When acquiring gas for customers, Black Hills does not contract with an intention of creating 'gas reserves,'" Black Hills wrote.

Even if customers conserved as a result of messaging from Black Hills, the company can't tell the PUC if it helped.

"This weather event is the first time in recent history that Black Hills has made such aggressive attempts to communicate with customers the critical importance of conserving energy to address a specific weather event," Black Hills wrote. "It will be difficult to quantify the singular impact Black Hills’ proactive energy usage conservation messages had on customers."

In its response to the PUC, Atmos explained that the amount of gas it had hedged from Feb. 13-16 was 41% of estimated winter usage for that time period. That means more than half was subject to the spot market.

"It is a really great illustration of how complex utility operation can be," said Carlson. "When you're relying on something that arrives just in time, you either need to store it or you need to know that you're going to be exposed if there's a shortage."

Atmos serves 120,000 households, about 6.5% of Colorado. Its coverage area includes northern areas like Greeley, Steamboat Springs and Craig, and southeastern Colorado with Lamar. It also serves Durango and Cortez in southwestern Colorado, as well as Cañon City, Salida and Gunnison.

Atmos does not have "gas reserves." It does have gas storage, but the public version of the filings did not detail how the stored gas was used.

According to the filing, it will seek added charges in differing amounts depending on the region where the customer lives.

Colorado Natural Gas did not provide estimates for what it anticipated it needed to charge customers to recoup costs.

"At this time, CNG does not have a determined recommendation on the procedural issues to seek recovery of the abnormal, cold-weather event costs," Colorado Natural Gas wrote.

The company services 24,000 customers, about 1.3% of Colorado in areas like Bennet, Bailey, Fairplay, Pueblo West, Rye and Colorado City.