First Gentleman Marlon Reis was the only family member of a government official prioritized on Colorado's list, which also includes the cabinet and essential staff. 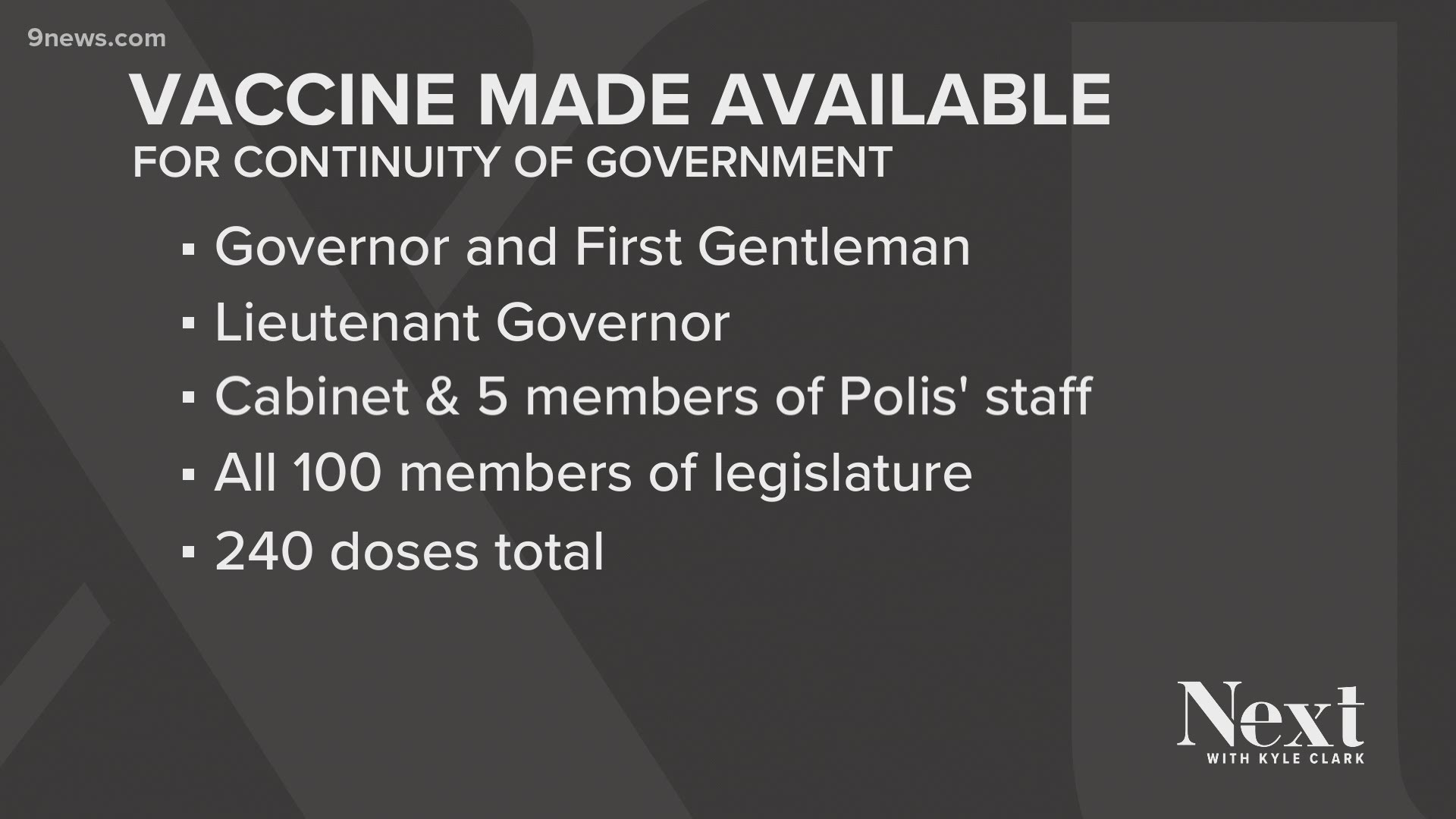 DENVER — Colorado First Gentleman Marlon Reis is the only family member of a state government official made eligible to receive the COVID-19 vaccine early.

Thursday, Gov. Jared Polis’ office said Reis was offered the vaccine under a “continuity of government” qualification that is based on federal guidance. Polis received his vaccine as a critical government worker in the state.

Both got their first doses last weekend.

“I kept getting a lot of inquiries – ‘if you want me to get the vaccine, why don’t you get it? If you believe in it so much, why don’t you get it?’ And we do want people to get it, so it’s important to put my arm where my mouth is,” Polis said during 9NEWS’ Vaccine Facts town hall earlier this week.

I got my first COVID-19 vaccine this afternoon at Salud Clinic! I want everyone to know that I have full confidence in the science and the data around this highly effective vaccine which will end the pandemic, and I’m putting my own arm where my mouth is and getting it myself. pic.twitter.com/MaCuJblOHa

Polis and Reis tested positive for COVID-19 in November, and Reis was hospitalized for his symptoms. The Centers for Disease Control and Prevention (CDC) recommends that people get the vaccine even if they previously had COVID, as fading antibodies could allow for reinfection.

Also in the town hall, Polis said Colorado offered early vaccinations to about 200 other people in state government roles.

A spokesperson said that group includes Lt. Gov. Dianne Primavera, the governor’s cabinet, some of his essential staff, all members of the Colorado legislature, Colorado Supreme Court justices and their staffs, and more. The statement from the governor's office did not include any other family members in the list.

Colorado did not make a special exception for previous Colorado governors and their spouses, though former Govs. Dick Lamm, Roy Romer and Bill Owens qualify because of their ages. Polis’ predecessor, now U.S. Sen. John Hickenlooper, would have already been offered the vaccine because of his position in Congress.

The governor's office said it could release the formal list of early vaccination offers once it is compiled.

Colorado recently expanded vaccine eligibility to include anyone 65 and older and educators in the state. That phase begins on Feb. 8.

RELATED: Life after the COVID vaccine: The science behind why 'normal' can't start again right now

RELATED: How to share your COVID-19 vaccine news tips with 9NEWS

RELATED: Hospital employees of all ages eligible for COVID-19 vaccine even if they don't see patients