They will be the first inmates in Colorado to receive the COVID-19 vaccine after months of political pressure and adaptations to the priority schedule. 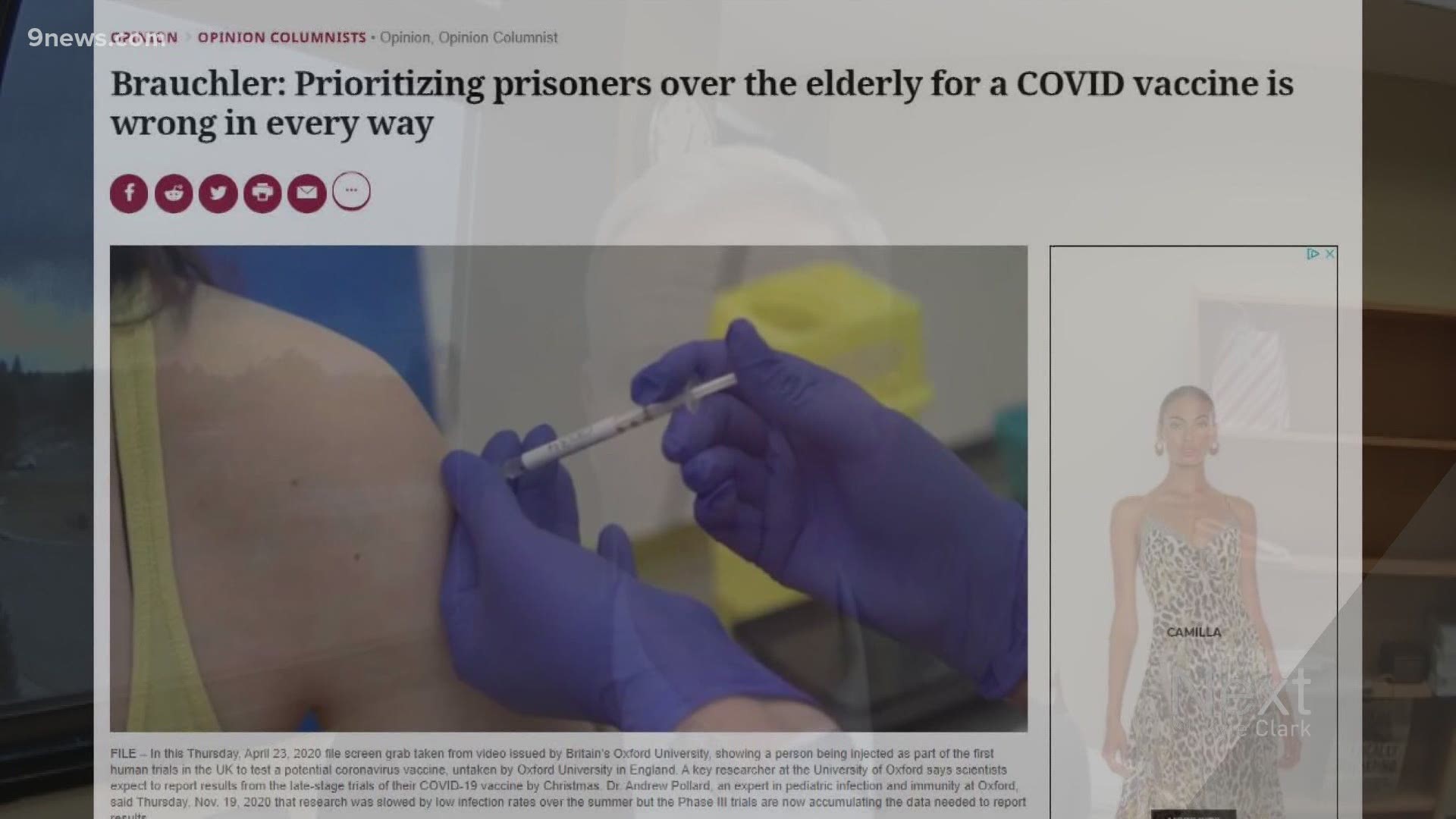 DENVER — After state leaders adapted Colorado’s vaccine priority last week allowing people over the age of 70 to be vaccinated in the current phase, Colorado’s Department of Corrections (DOC) will begin vaccinating inmates in that age bracket on Tuesday, a DOC spokeswoman confirmed to 9NEWS.

The inmates will be the first in the state to receive the COVID-19 vaccine after months of political pressure and adaptations to Colorado's priority schedule involving inmates. State leaders announced in early December that inmates would be treated like any other member of the population, eligible for the shot by their age and any underlying conditions.

That move was a shift from the Colorado Department of Public Heath and Environment’s (CDPHE) original draft of vaccine priority in October, which placed state prison inmates and other residents of congregate populations like homeless shelters in the third round of vaccines, above seniors and people with underlying health conditions.

The shift in policy came after Gov. Jared Polis (D) faced tremendous pressure from conservatives for prioritizing the move. In late November, 18th Judicial District Attorney George Brauchler wrote an op-ed in the Denver post, arguing prison inmates shouldn’t be vaccinated before older members of the population, like his 78-year-old father.

“What in the hell is Gov. Polis doing?” Brauchler wrote on November 26. “If this outrageous plan remains in place, the family of every elderly Coloradan who contracts and dies from COVID while prisoners get vaccinated will have one person to look to for answers: Jared Polis.”

Days later, Polis denied that prioritization was part of the state’s plan when he was asked about Brauchler’s comments at a news conference.

“There's no way it's going to go to prisoners before it goes to people who haven't committed any crime. That's obvious," Polis said on Dec. 1.

“The initial response from the governor, when confronted with that bizarre prioritization, was so over the top strong – so much stronger than I even suggested,” Brauchler told 9NEWS.

A day after Polis’ initial comments, the head of the Colorado Gerontological Society wrote an e-mail to Dr. Eric France, the chief medical officer for CDPHE.

“We, at the Colorado Gerontological Society, are concerned about recent news reports that some groups such as inmates in the Department of Corrections may receive higher priority than health care workers and vulnerable adults,” Eileen Doherty, the executive director of the society, wrote in a Dec. 2 e-mail.

France’s response and the responses of other staffers were redacted in the e-mails sent to 9NEWS through an open records request. An attorney for the governor’s office told 9NEWS the redactions protected “work product,” which is shielded from disclosure under the state’s open records law.

On December 2, the governor's staff forwarded an e-mail from the CDC indicating that Dr. Redfield signed off on the Advisory Committee on Immunization Practices recommendations for vaccine priority. CDPHE's Chief Medical Officer, Dr. Eric France, says something lengthy. pic.twitter.com/smnQuOhsX6

The day before Colorado’s revised plan with prisoners moved down was released, a representative from the Colorado Criminal Justice Reform Coalition wrote to Department of Public Safety Director Stan Hilkey urging him to speak to the Governor about the dire conditions side prisons.

“[The governor] doesn’t seem to understand how serious the situation is,” the woman named Christie wrote to Hilkey. “Seven people died in prison last week from COVID.”

Hilkey’s message to the governor’s staff, as well as responses from one of the governor’s top advisors and his chief of staff were all redacted for the same reason.

On Dec. 9, Polis announced the adapted priority list, which moved prisoners to the same place in line as the rest of Coloradans.

Brauchler, who is largely credited for influencing the governor’s decision, said he believes the Polis overcorrected and that some prisoners should have priority over the general healthy younger population.

“One the person who is 30 years old and outside of prison has the ability to make decisions that protect themselves from the virus as those in prison who don’t and we do have a moral obligation to look out for the health of the people we incarcerate even if it’s a product of their own conduct.”