A new law that took effect this year tries to ensure "equal pay for equal work" by allowing for more transparency around salaries. 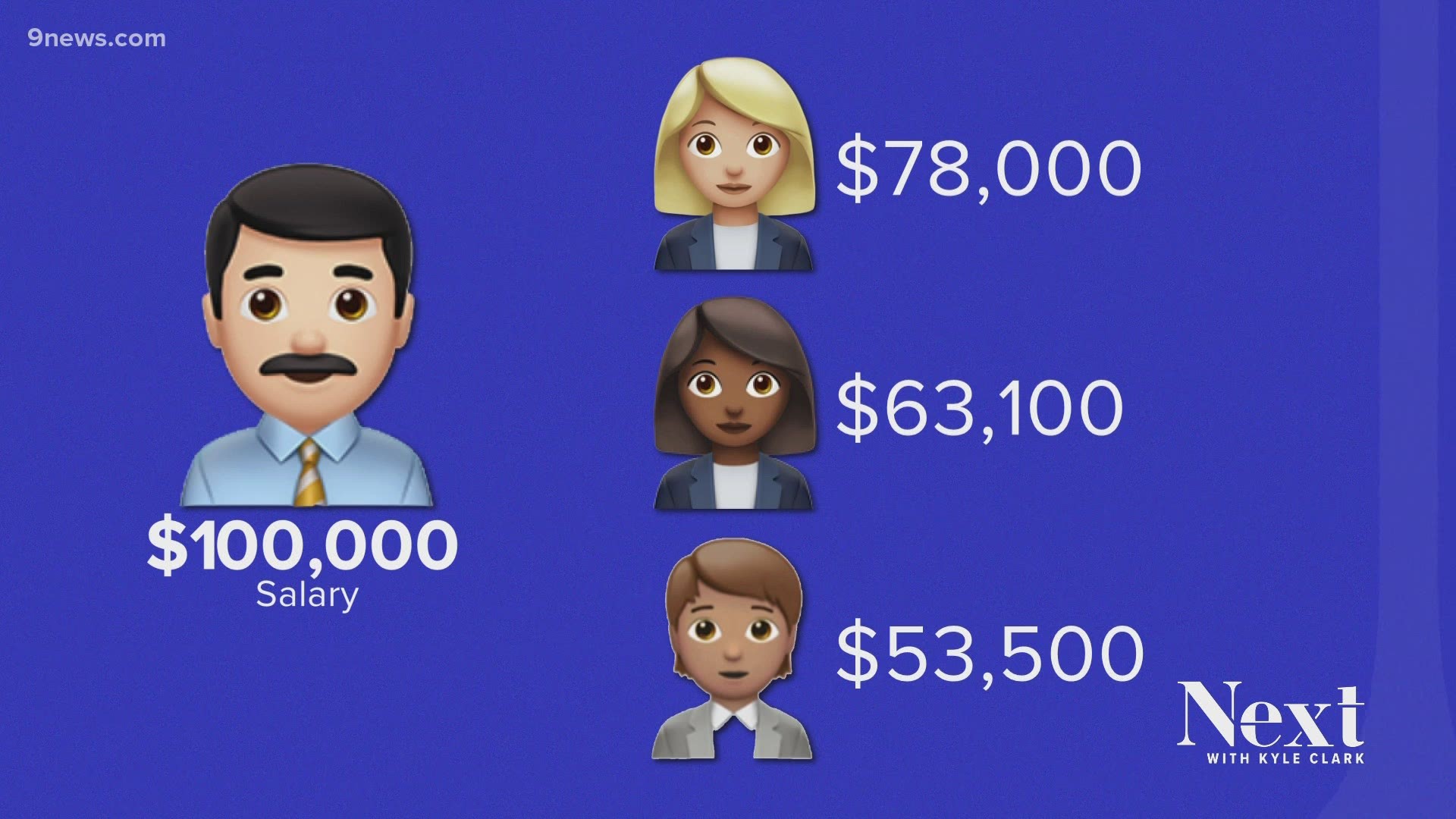 DENVER — Remember when water coolers were something you could talk around with your coworkers?

One topic that was taboo: salaries.

That's not the case anymore with a new Colorado law that took effect this year to tries to bring "equal pay for equal work."

"I was probably being paid anywhere from $50,000-$80,000 less than my colleagues," said Wendy Rockwell, who fought for equal pay at her company. "It was five years where I felt that something was off. And in the company, we were not allowed to speak with our colleagues about their income and about their merit increases."

Rockwell kept a detailed spreadsheet of her pay and accomplishments at work, and realized she wasn't getting paid for work equal to her male coworkers.

She told some trusted coworkers her salary and got surprised reactions.

"My colleagues, they were horrified because they were like, 'no, I'm not being paid that at all,'" said Rockwell. "A new colleague shared with me they were $30,000 more."

Colorado's "Equal Pay for Equal Work Act" was signed in 2019 but didn’t take effect until Jan. 1.

One of the provisions prevents an employer from retaliating against an employee for discussing salaries with coworkers. That wasn't the case when Rockwell was trying to investigate her pay disparity.

"No, because then I would have violated the company policy of not discussing," said Rockwell.

While she was fighting for equal pay, without much success, her company was bought, and the new owners made good.

"When I went to the new company, they put in an emergency rectification of $30,000. Within six months, they'd increased it by $50,000 for me doing the same job," said Rockwell. "For five years that I was pursuing this and not getting anywhere, it was a loss of about $250,000."

"Based on today's wage gap, white women would lose approximately $400,000 over the course of a 40-year career. And for Latinas, the career losses are over $1.1 million, and then for black women, a little over $900,000," said Lauren Y. Casteel, president and CEO of The Women's Foundation of Colorado.

Her group helped lobby for an equal pay law for years.

Besides allowing workers to discuss salaries without retribution, the law requires job postings in Colorado to have a salary range posted.

"For instance, if you see your job being posted and you're not in that salary range, that's a pretty big key that you're not being paid fairly," said Rachel Ellis, managing partner at Livelihood Law, an employment law firm.

Ellis was on the committee that helped write the new equal pay law.

It lists reasons why it would be within the law for a man and a woman to be paid differently.

It would be OK for the wage difference to be based on all of the following:

"If it's applicable, those are all reasons that employers can pay men and women differently," said Ellis. "The fact that you both like fantasy football is not a reason to pay a man on your team more than you pay a woman."

Another aspect of the new law does not allow potential employers to ask the salary an applicant currently makes.

"I always got this question, 'well, why didn't you just go to another job?' Because when I was interviewing at these other places, every single time they were like, 'so, what's your salary? And can you verify it?' And you have to send in paperwork to verify your salary, so I was never really finding that I was going to get out of that loop," said Rockwell.

Employers are also required to let all employees know about promotion opportunities and not just a select few.

The Institute for Women's Policy Research has studied the pay gap.

Here is how that compared to by race and gender:

"I probably have tripled my salary by being able to leverage my information," said Rockwell. "It's a child's fund for college or turning on the air conditioner when it's 100 degrees outside, my family still doesn't forgive me for that."

"To be fair on the playing field, is a value we should all have," said Casteel. "Research will be able to verify, over time, when those gaps are closing."

What should you do if you feel underpaid for the same work and responsibility as a coworker?

As part of this new law, you can contact Human Resources and ask for a salary audit. You can try discussing salaries with coworkers. You should also look at job postings in your company, to see the salary ranges.

The Women's Foundation of Colorado will hold a webinar on Jan. 29 at noon, to help employees and job-seekers get the state's new "equal pay for equal work" law to work for them.