Colorado Capitol entry comes with temperature checks that don't matter, and other first-day back news

Masks? A high temperature? Workplace safety guidelines were mostly suggestions rather than hard and fast rules when lawmakers returned to work Tuesday. 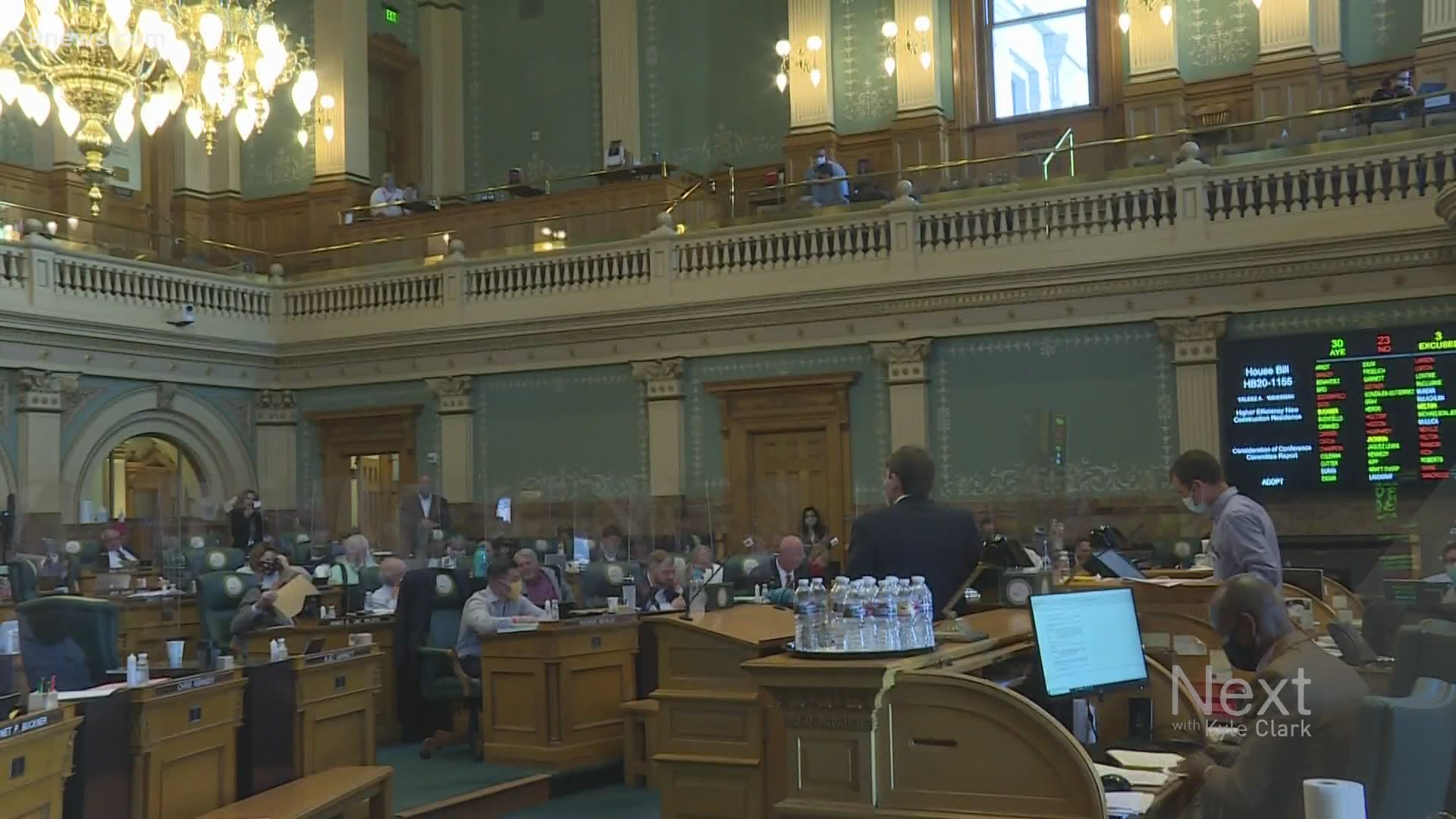 DENVER — When Colorado’s Democrat-led Legislature returned to work Tuesday, it was tasked with considering dozens of sacrifices brought on by the novel coronavirus, COVID-19.

Economic fallout from the pandemic is forcing a 25% cut in next year’s general fund spending, with virtually every revenue source in free-fall decline.

Lawmakers are looking at drastic cuts to K-12 and higher education funding, while seniors could lose tax breaks on their homes. The top priority is passing a balanced budget for the fiscal year starting July 1.

But on this first day back after a pandemic pause, lawmakers were also tasked with adjusting to policy and process changes inside the Capitol building.

On March 14, the legislature hit pause and suspended its 120-day session. On Tuesday, it reconvened on Day 69 with changes including social distancing, temperature checks and adjustments to the way the public interacts with the legislature.

Now, when people enter the south entrance, they are asked if they want their temperature checked, along with three other questions:

The target temperature is less than 100.4 degrees.

"If they pass the test and have a lower temperature, they get a wrist band," said Shauna King, founder of International Medical Relief, the volunteer group doing the temperature and health checks.

But what happens if someone has a temperature greater than 100.4 degrees or answers yes to those questions?

"If somebody does have any of the symptoms or they do have a high fever they can still enter. They are all welcome here at the Capitol, they just will not get the wrist band showing that they passed the screening," said King.

That's if you decide to answer the questions or have your temperature taken at all.

You can bypass it, and just not get a wrist band.

"I think we're here to make a difference," said King. "We're here to keep this space healthy and safe, and we've been asked to come here and staff this and we're very happy to help and do our part."

Neville, the House Minority Leader, said he tried to enter the Capitol through his normal door, not in the south entrance, and found it locked, not knowing there was a uniform entrance point for temperature checks.

"I mean, you can't Constitutionally limit people, especially legislators, from coming in here, and it's the same thing with citizens," said Neville.

RELATED: What will Colorado lawmakers do when they come back to work after COVID-19?

What's the point of a temperature check, if the results don't matter?

"If I were to walk in today and have a fever, I would be handed additional information about the symptoms and what to do to make sure I didn't have COVID, but as someone concerned about community spread, I would turn around and go determine whether or not I was contagious or had COVID," said Rep. Alec Garnett, D-Denver.

International Medical Relief didn't make the rules, the volunteers are just following the procedures put in place from those who work at the Capitol.

Garnett and other members of leadership help put in place the rules to re-open the Capitol, rules that are different for lawmakers.

In the House, lawmakers are not required to wear a mask, but the general public is warned on multiple signs at the Capitol that masks are required.

"The Capitol is within the city and county of Denver. There are ordinances that in place that need to be followed," said Garnett. "[Colorado State Patrol] will be enforcing the ordinances within the jurisdiction that we sit today, and that has been a shift, but one that I think is an important one to keep people safe here in the building and allow us to get the essential work done for the people of Colorado."

A handful of House Republican lawmakers were not wearing masks at all, or had them pulled around their neck, during the session in the House Chamber on Tuesday morning. Lawmakers who sat side-by-side were separated by transparent partitions at their desks. Some lawmakers chose to move upstairs into the gallery, where they had to shout their votes down to the House Speaker to be recorded, since they were not near their digital vote box.

Credit: 9NEWS
Lawmakers who sat side-by-side were separated by transparent partitions at their desks

In the Senate, every other seat was marked as vacant, and those Senators were moved to the benches along the back and side of the Senate floor.

"In the Senate, we are requiring masks of everybody," said Sen. Steve Fenberg, D-Boulder.

Unlike the House, the Senate is going with the same rules as the public, at least on Wednesday. There will be a vote for a resolution to require masks in the Senate. That was not a mandatory move on Tuesday.

"We have not declared some sort of edict that absolutely everybody needs to wear a mask or else all these ramifications occur, but just about everybody on the Senate floor, this morning, had a mask on," said Fenberg.

The changes to policy started on Tuesday morning with the introduction or announcement of new bills that did not exist prior to the pandemic pause.

The House Democrats are going to introduce a bill to deal with price gouging.

But why did it take a pandemic in 2020 for lawmakers to realize there isn't a strong law in Colorado to deal with price gouging?

"There's two ways that bills pass in a legislative body, one is because they haven't been addressed in a long time, and another is because there is a focusing event that draws everyone's attention to the gaps in our statutes," said Garnett. "When I'm out knocking doors and talking to constituents before this pandemic, price gouging didn't come up when I was talking to folks."

At a time when state lawmakers have to cut from the state's budget, this proposal would add to a business owner's bottom line.

"We are expending millions of dollars on this crisis," said Fenberg. "The burden on businesses is going to be quite minimal. Many businesses already provide PTO (paid time off) or sick leave, and they wouldn't have to do anything in addition to what they already do."

He said since paid sick time would be accrued over time, the cost, if any to a business, would not be felt all at once.

"If the alternative is, we want the waitress that served us breakfast this morning to have COVID-19 and still come to work, I don't think that is tenable. What we are looking for is just making sure that folks have an incredibly basic level of a benefit, so that they know they can stay home one day, two days at a time, to get better," said Fenberg.

Another bill sponsored by Senate Democrats would increase benefits for people receiving unemployment. Since mid-March, more than 400,000 Coloradans have filed for unemployment.