The Colorado Rockies are looking to make a trade to avoid being homeless in two weeks. 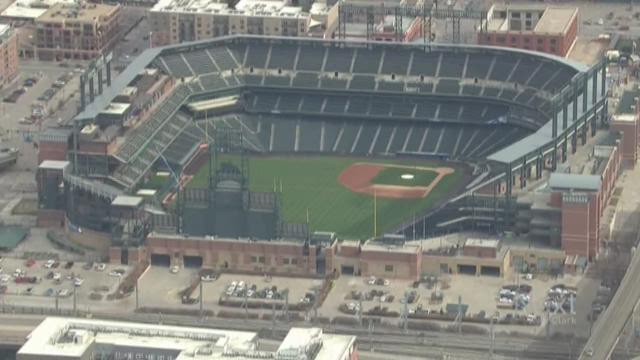 The Colorado Rockies are looking to make a trade to avoid being homeless in two weeks.

No, Trevor Story isn't getting dealt for a bunch of no names. At least, we don't think so.

The Rockies 22-year lease to play at Coors Field expires on March 30.

No, the Rockies will not be playing at the West High School baseball field, but the team doesn't yet have an agreement beyond this month.

The team is willing to take on 30 years worth of Coors Field maintenance and upgrade costs in exchange for the "West Lot," which is the parking lot that's actually south of the stadium.

The 291 spaces are between Jackson's and the Denver Chophouse, bordered by 19th and 20th Streets and Wazee and Wynkoop Streets.

The current lease allows the Rockies to extend the agreement by five years, three different times. At a board meeting last March, the Rockies told the District it is not interested in any of the five-year extensions.

Here's something you may not know. Unlike at Mile High, the Metropolitan Baseball Stadium District does not get any money in naming rights. Coors put in $30 million to help the Rockies land in Denver, with $15 million going to the naming rights. When the original lease was signed in 1995, Coors was given the naming rights 'in perpetuity,' meaning forever at no extra cost.

Money from naming rights helps fund the upkeep and upgrades of stadiums.

The Rockies commissioned a report in late 2015 to determine the future of Coors Field. The report determined that it would cost about $194 million to provide capital improvements to the stadium over 30 years. More or less, the Rockies need about $7 million a year for 30 years.

Last March, the Rockies proposed buying the parking lot for $5 million a year over 30 years, after which it would own the land outright. The team would then agree to a $2 million a year lease for 30 years. Altogether, the money would cover the costs of capital improvements for 30 years.

Prior to that March 2016 meeting, the Rockies and the District worked together asking developers for proposals for the parking lot in question.

Essentially, there are two options:

1. The District could lease the land to a developer, and take the money and pour it back into stadium upgrades, while reaching a long-term lease with the Rockies.

2. Sell the land to the Rockies, which will allow the District to use the money from the sale to pay for upgrades at Coors Field.

The city of Denver has that parking lot zoned for an eight-story building. It's likely the land will be developed into office, housing and retail. No matter what happens, the 291 parking spots are supposed to be build underground, so that no parking would be lost.

The Rockies also proposed creating a Hall of Fame or other ballpark experience enhancement.

The last time the lease negotiations were discussed in public was at the district board's November meeting. At that time, the two sides were still working out details.

The board was supposed to meet on Wednesday, but that meeting was postponed because of personal reasons for one of the board members. The meeting must be rescheduled by March 30 to at least extend the lease before the Rockies can play in the home opener on April 7.

Late Wednesday, the district board's spokesman provided Next this statement:

"The Denver Metropolitan Major League Baseball Stadium District and the Colorado Rockies Baseball Club are working diligently on a new lease agreement, ensuring the team continues to play at Coors Field well into the future. While the current lease expires at the end of March, the team and the District are in the process of finalizing a new lease agreement before that deadline."