Both Republican Cory Gardner and Democrat John Hickenlooper have not lost an election. That will change for one of them come November. 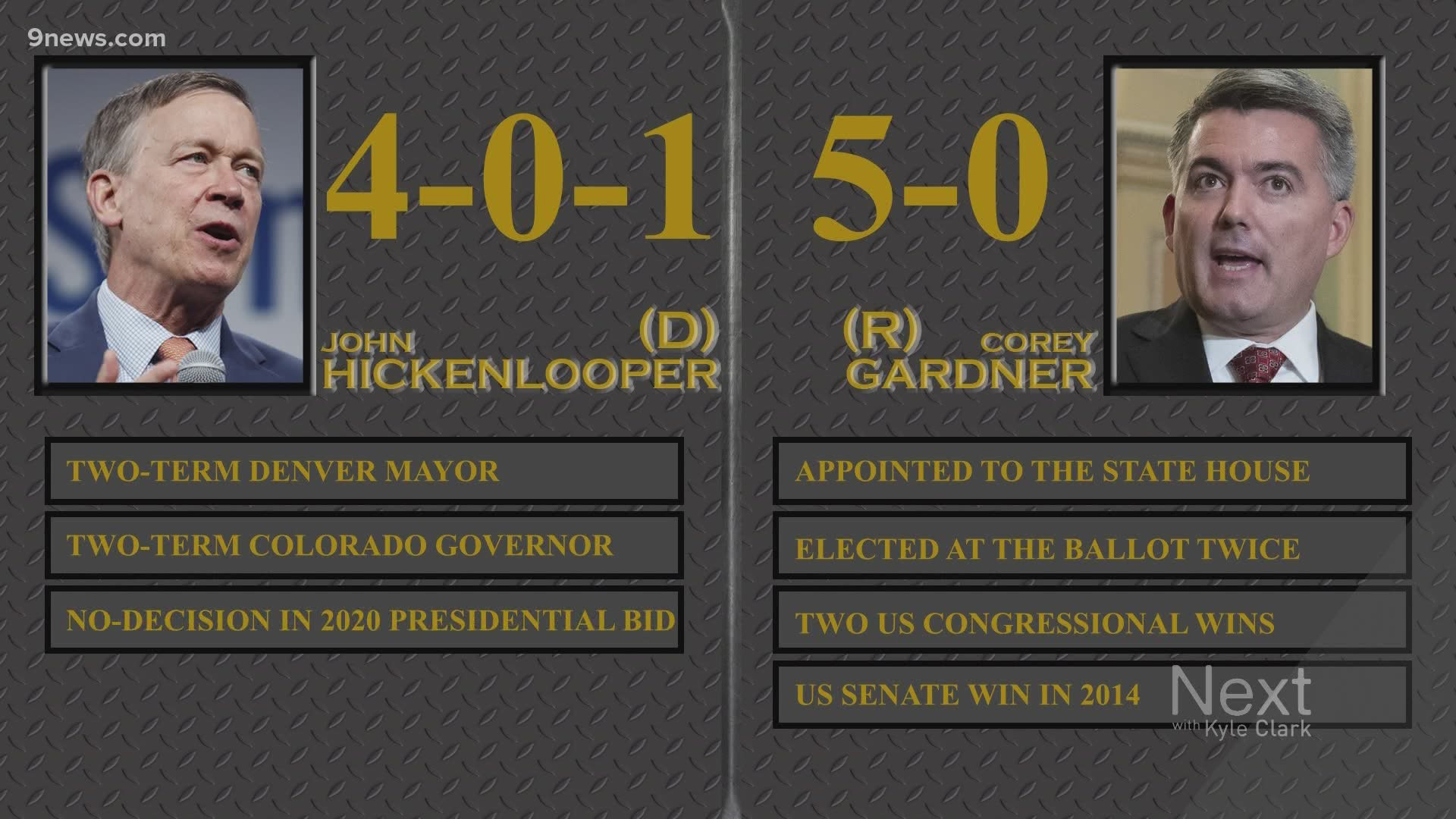 DENVER — We're lacking sports these days, so this will have to do.

Gardner, first appointed to the state House in 2005, won two elections before running for Congress and winning two elections in 2010 and 2012. His big win came in 2014 when he defeated then-Democratic Sen. Mark Udall.

Hickenlooper has two wins as Denver mayor, followed by two gubernatorial wins in 2010 and 2014. The "1" in his "4-0-1" record is the no decision for dropping out of the presidential race.

Gardner vs. Hickenlooper for the U.S. Senate, November 3rd.

When Gardner beat Udall in 2014, the statewide election results map looked like this:

Jefferson, Larimer and Pueblo Counties were basically a draw.

Gardner kept it close in the suburbs, despite losing Adams and Arapahoe Counties by a few thousand votes.

With the strength of the conservative counties, Gardner defeated Udall by almost 40,000 votes.

In Jefferson, Larimer and Pueblo Counties, where Gardner kept the race close for Senate, Hickenlooper did much better than Beauprez.

In most counties, Hickenlooper outperformed Gardner. Granted, those were different races, but perhaps an indication of what could happen in 2020.

David Flaherty, who runs Magellan Strategies, a conservative polling firm in Louisville, points out that 2014 was pre-President Trump. He sees Trump as an obstacle to Gardner winning in 2020.

"It is a much bigger weight on his chances. It is a headwind for him. The president is not, by any means, a positive for Cory Gardner. He is a negative, especially these last couple of weeks, and anybody that denies that has their head in the sand," said Flaherty. "When you're running with the president, you're running for his style and brand of divisive politics, and that's a big problem and that did not exist in 2014 when Cory was elected."

RELATED: Colorado 2020 primary election results: All the races that have been called so far

RELATED: What you need to know about Tuesday's primary election

"What unaffiliated voters, back then, really liked about Cory Gardner, was his optimism, his character," said Flaherty. "What did you like about John Hickenlooper? and the number one reasons were, he appears to be fighting for all Coloradans and that he's not partisan at all. Two, is he doesn't run any negative ads, and so that proves to me what he's talking about. And three, they feel that he doesn't follow an ideology and just does the best he can in his office. But also back then, we did not have Cory having to pledge allegiance to a president that is extremely unpopular in our state. And that adds a new dynamic, because voters will look at Cory and be like, 'are you going to continue to support President Trump? Because I am uncomfortable with his leadership.'"

Let's look at 2018 for some guidance, and the statewide gubernatorial race between Democrat Jared Polis and Republican Walker Stapleton.

In that race, Polis outperformed Gardner's 2014 numbers in 14 counties:

Polis either turned those counties blue or closer to blue.

"The candidate does matter. People are not voting blindly for a party. Granted, Walker Stapleton also faced the headwinds of perhaps Donald Trump not being popular in 2018, but I don't think that's a fair comparison whatsoever. Campaigns are different. Candidates are different," said Flaherty. "With all due respect to Walker Stapleton and his team, I would not even compare that effort to what I anticipate to be a much better, stronger effort from Cory Gardner, and the candidate matters, with all due respect."

His advice for Gardner? Distance himself from Trump and focus on himself.

"He would be served well by having a direct conversation with Colorado voters about where he's from, what he's been doing in the Senate and what he wants to do moving forward," said Flaherty. "If the strategy is just to run with the president without any comment or any demonstration of being his own person, we believe it's going to be unlikely that he will be successful in November."