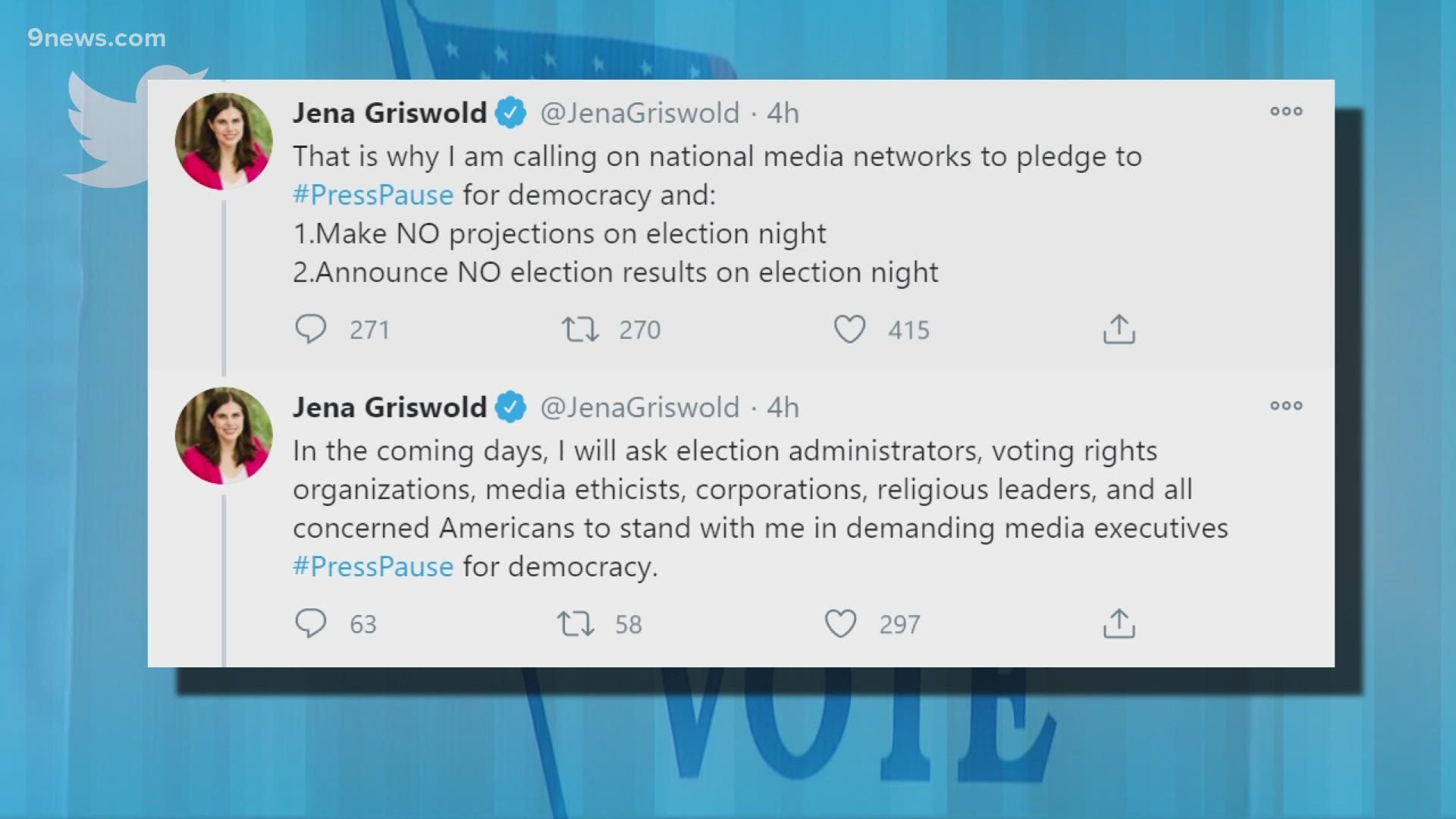 DENVER — Colorado's top elections official on Thursday tweeted and deleted what could be an unprecedented call for media outlets to not report results on election night.

Democratic Secretary of State Jena Griswold originally shared the ask in a Twitter thread, in which she specifically called on national media outlets to not release election night vote totals and to not make projections.

"This is no normal election. A record number of Americans will be voting by mail," she wrote. "Election 'night' will be dramatically different than ever before. We need an UNPRECEDENTED plan from the media for how they will cover an unprecedented election."

"That is why I am calling on national media networks to pledge to #PressPause for democracy and:

The proposal was made on the grounds that President Trump will use election night numbers to declare victory prematurely, she said, as more Americans will vote by mail this year because of the COVID-19 pandemic.

Dominik Stecula, an assistant professor of political science at Colorado State University, pointed out that even if news organizations followed this protocol, vote tallies would still be published by election officials, including Griswold.

"Even if the media go along with this proposal not post any projections, you know, the social media will be ripe with misinformation. There's absolutely nothing to secretary can do about that," Stecula said.

Hours after Griswold sent the tweet, it was deleted and replaced with a new post that said her words were misinterpreted. She later issued the following statement:

"I would like to apologize for a tweet I put out earlier tonight. It was confusing, and the point I was trying to make was made inartfully. My intention was to draw attention to the fact that other states across the nation are drastically adopting new voting procedures, and it is critically important that these changes be taken into account in election night reporting. Unlike Colorado, some states may not be able to process ballots until Election Day or after.  A free press is a key pillar of our democracy, and I have full confidence the media will handle this professionally and accurately."

In another new tweet, Griswold wrote instead that she's asking journalists not to call a winner in the presidential election until all ballots are counted.

While 9NEWS will share results on election night, Americans certainly may not know the 2020 presidential election winner by the end of Nov. 3. The final outcome may not be clear for days or weeks due to the expected record flood of mailed ballots and the legal challenges that will surely follow.

Journalists are already doing this: warning that the vote counting will be prolonged and that President Trump may try to prematurely claim victory and then try to stop the vote count. What SOS Griswold is asking for, suppression of results from the public, is different. https://t.co/MaVQOYV1JO

In other tweets, Griswold said she will ask other election officials, media ethicists, corporations and religious leaders to make similar demands of journalists.

Griswold was not available to answer further questions from 9NEWS on Thursday.

RELATED: How did the US get the electoral college and how does it work?

RELATED: Why the presidential election could take a month or more to decide