This is our first look at numbers from the aid-in-dying law, but there are some statistics we'll never know. 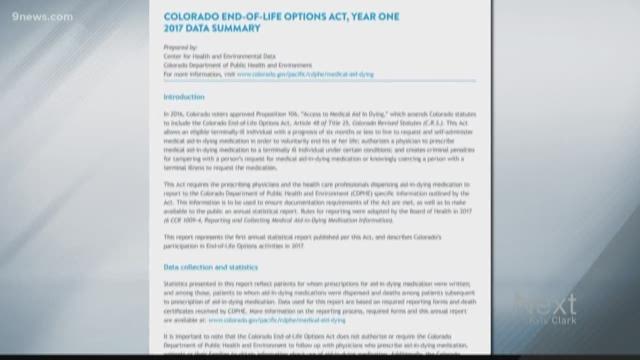 Sixty-nine terminally ill Coloradans were issued prescriptions for medication to end their lives in the first year of the state’s new medical aid in dying law, according to a report released Thursday by the Colorado Department of Public Health and Environment. Fifty of those patients had prescriptions filled.

But the state doesn’t know how many patients used those drugs.

The report doesn’t indicate how many of those patients ingested the medication to end their lives, though the report does indicate it has death certificates for 56 of the 69 patients who received prescriptions.

Fifty-four percent of those prescribed were men, 46 percent were female, according to the CDPHE report. The median age of people who received a prescription was 75 years old.

The state also reports 93 percent of patients were enrolled in hospice care when they were prescribed.

Perspective on Colorado’s aid-in-dying law after one year

Next Question: What happens to physician-assisted suicide prescription if it's unused?

Why Colorado doctors may struggle with physician-assisted suicide