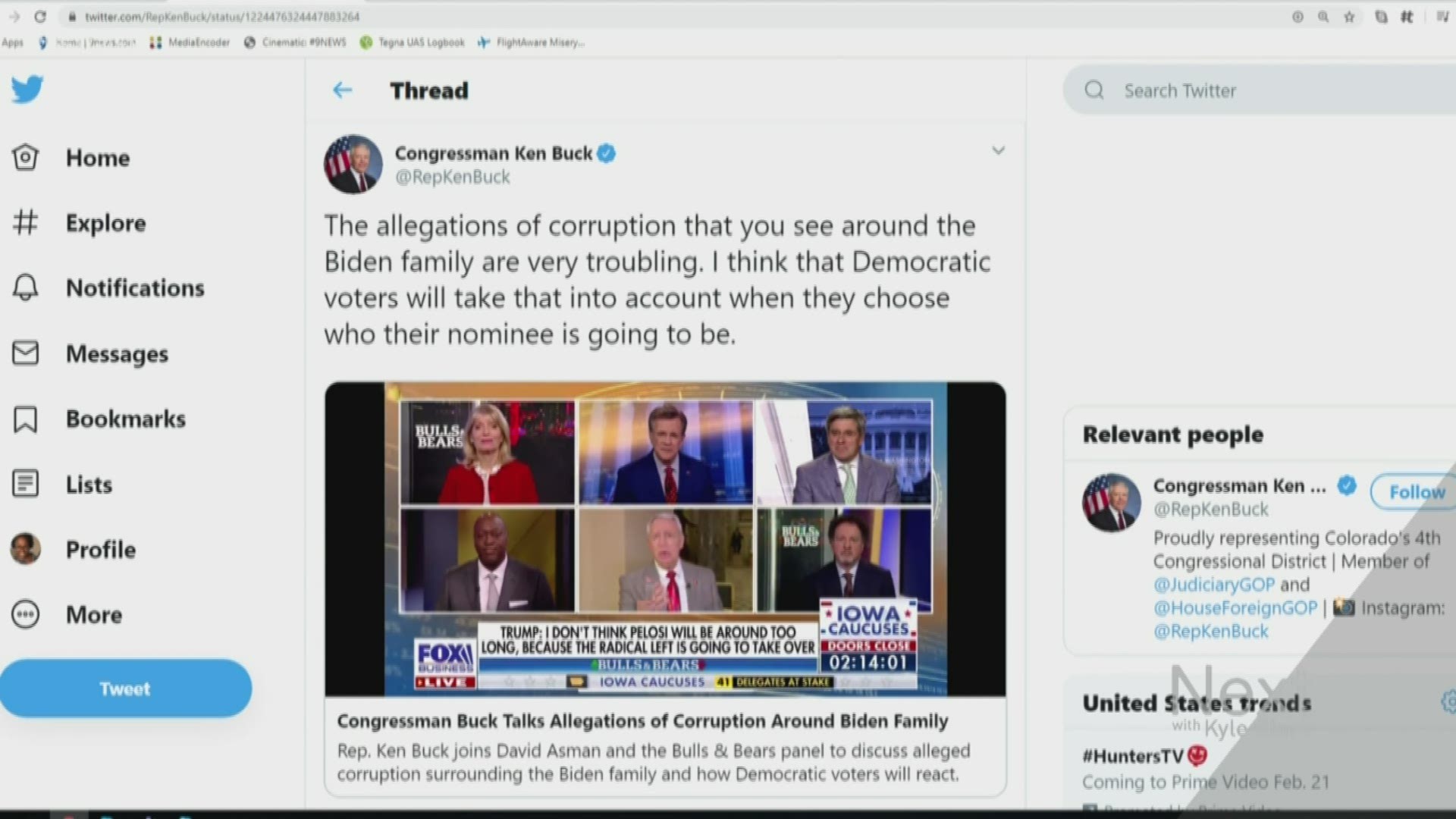 DENVER — Following a senator’s warning that former Vice President Joe Biden could face impeachment the day after becoming president, if he were to be elected, Colorado Congressman Ken Buck said there was no reason to wait.

Buck, also the chairman of Colorado’s Republican Party, appeared on the Fox Business program Bulls & Bears on Monday, hours ahead of the Iowa caucus. Buck was asked to comment on the remarks Sen. Joni Ernst (R-Iowa) made to Bloomberg News over the weekend.

“Well, I would say this. There’s no reason to wait for that. Vice President Biden could be impeached now,” Buck said. “There’s no reason that you have to only impeach someone that is in office. You can hold the hearings. You can gather the evidence. You can move forward. But the extent of the corruption that you see, at least the allegations of corruption, that you see around the Biden family is very troubling.”

Former elected officials can be impeached after their tenure to keep them for holding a political office in the future. In her interview, Ernst told Bloomberg:

“Joe Biden should be very careful what he’s asking for because, you know, we can have a situation where if it should ever be President Biden, that immediately, people, right the day after he would be elected would be saying, ‘Well, we’re going to impeach him.’”

Ernst said the basis for impeachment would be Biden’s investigation into Ukrainian corruption, under the direction of Pres. Barack Obama, while his son, Hunter, sat on the board of Ukrainian gas company Burisma.

“Absolutely I think the primary role of Congress is to solve problems and to move issues forward,” Buck said. “But there’s another role in Congress and that is oversight and the American people have to trust their government. And Congress is one of those bodies that has the abilities and should look at past administrations and current administrations and make sure that people are acting honorably.”

Since the process would begin in the Democrat-controlled U.S. House, impeaching Biden now is near impossible.

Ernst has walked back her comments in the day since they were reported. She told The Hill that her comments were taken out of context, and she was trying to imply Democrats have lowered the bar for what constitutes an impeachable offense.

President Donald Trump was impeached by the House last month on charges that he abused power and obstructed Congress as he tried to pressure Ukraine to investigate Democratic rival Joe Biden, using military aid as leverage as the ally fought Russia. He is charged with then blocking the congressional probe of his actions. The vote in Trump's Senate trial this week is expected to cap a months-long investigation.

RELATED: Trump State of the Union to project optimism during bitter division