In letter to Polis, groups say they're tired of being surprised by health decisions 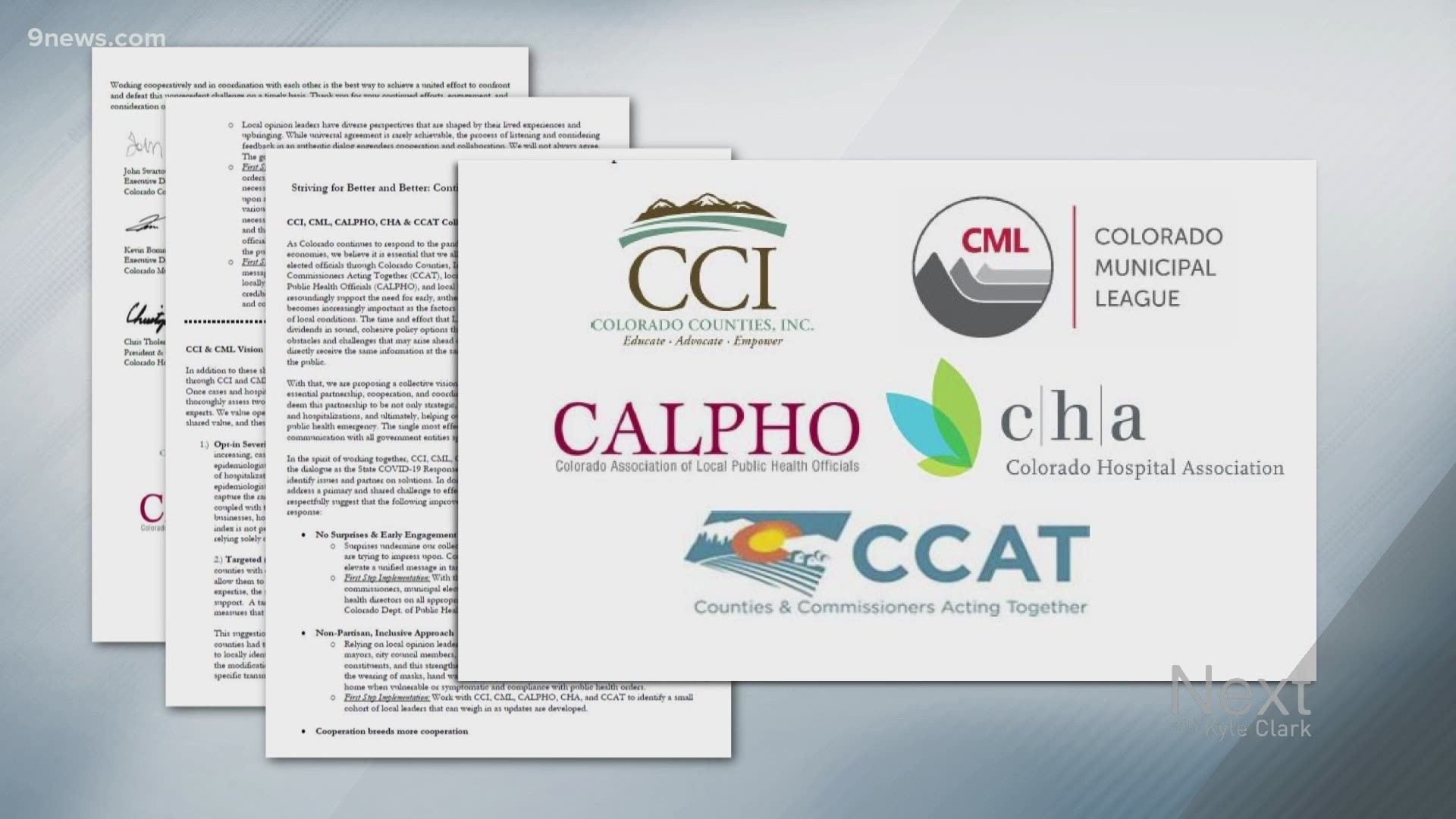 The letter was sent to Gov. Jared Polis (D) on Tuesday from a handful of groups that included:

The letter to Polis asks for a better partnership between local and state decision-makers, asking for "no surprises and early engagement."

"Surprises undermine our collective credibility and puts us at odds unnecessarily with the public we are trying to impress upon. Commissioners and other local elected and appointed officials can locally elevate a unified message in tandem with the State, but to do so, we must be involved at the onset," the letter stated.

The letter from these groups also asked the governor for better cooperation.

"Work with CCI, CML, CALPHO, and CHA to develop all plans, orders, and restrictions designed to be implemented on a local basis," the letter stated.

"It's not a threatening letter. We're taking great pains to be extremely polite, diplomatic and genuine about our intent of creating a win-win," said Colorado Counties, Inc. Executive Director John Swartout.

At the start of the letter, the groups say they, "...resoundingly support the need for early, authentic and ongoing engagement in COVID policy development."

The executive director of the Colorado Municipal League explained that seeking authenticity doesn't mean the governor or the state is not being genuine.

"It's not a matter of being authentic, it's a matter of working with the governor to meet his stated goals, but doing so in an organic level, and organic means at the local level," said CML Executive Director Kevin Bommer.

Ultimately, the groups want to be able to defend the decision and explain them to constituents in a way that shows they were involved and support the outcomes.

"If local government leaders can't say we were engaged with the governor's office and the governor's team all the way through, and we agree and we coordinated this outcome, then that's a problem," said Bommer.

"We'd be in a better place if we sat down together and identified the problem of getting through this and jointly came up with a strategy to deal with this," said Swartout.

The letter ends with two requests for long-term improvements.

RELATED: There are 1 in 40 Coloradans contagious with COVID-19. How does the state figure that out?

One suggestion is for "opt-in severity metrics," which would look at the severity of hospitalization stays when making public health decisions.

"While case numbers are increasing, case severity is decreasing. Additionally, hospital care is improving. For counties with epidemiologists and other qualified experts, allow them to opt-in to an approach that considers the severity of hospitalization stays," the letter stated.

The other suggestion is for "targeted (rather than blanket) restrictions."

"This suggestion is different from the variance approach. The variance approach included capacity limits and counties had to specify the modifications they were using to protect public health. This will allow counties to locally identify both capacity limits for various industries (restaurants, essential business, gyms, etc.) and the modifications (plexiglass shields, hand sanitizing stations, etc.) that must be in place to address the specific transmission patterns and circumstances their contact tracers are seeing in their communities," the letter stated.

The groups asked for a response from Polis by Thursday afternoon.

In a email, Polis' spokesman did not say if the governor would meet with the groups, but instead listed all the ways that Polis currently meets with local leaders.

“Colorado is faring better than our neighboring states but we know the fight against this deadly virus will go on. We appreciate our close partnership with local governments. I know it is more important than ever for the state and local governments to remain coordinated and on the same page in the face of a common enemy. We consistently highlight frequent, new, and existing opportunities for state, local, and leaders to connect, share information, and discuss statewide and localized issues and the Governor is regularly on calls and zooms with mayors and commissioners. That’s why the Governor had made it a priority to have local government representatives on working groups to inform major policy decisions such as the Protect Our Neighbors phase to create Protect Our Neighbors, the Dial Working Group to create the dial framework, the Return to School Working Group to support parents and school districts to return to in-person learning, and the Ski Planning Working Group to establish the policies to support safe activities at ski areas. The Governor welcomes even closer engagement with local government," Polis' spokesman said.