'Could have been a lot worse,' says Eastern Plains rancher of bomb cyclone

When Decky Spiller emerged from his house on Thursday, he didn’t know what to expect at the ranch where he works in Elbert County. 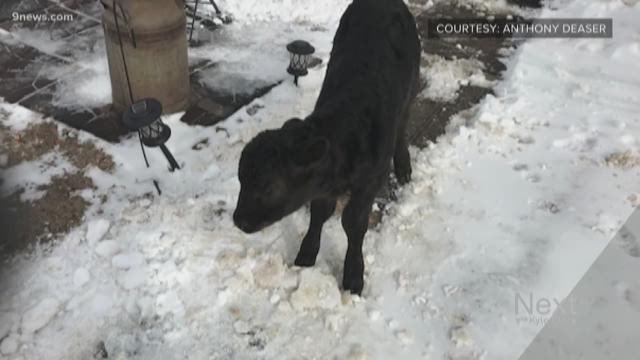 ELBERT COUNTY, Colorado — When Decky Spiller emerged from his house on Thursday, he didn’t know what to expect at the ranch where he works in Elbert County.

“It’s been a process of digging the snow out where we could get to the livestock and evaluate their welfare, and get them fed, and kind of find out what, if any, our losses might be,” he said.

RELATED: The March 2019 'bomb cyclone' blizzard by the numbers

Most mature cows at Silver Spur weathered the storm outside. They were bedded in hay, and took cover under large trees and brush.

Spiller’s team managed to bring calves born before the storm to shelter, as well as the cattle due to give birth. They’re still counting the losses now but guess that out of about 50 calves born in the blizzard, eight to 12 didn’t make it.

“Those calves that were born during the storm, it was pretty tough for them,” he said. “We didn’t save all of those calves, but most of them survived, and we were able to get upright going forward.”

About 900 cows at this ranch will give birth by the time calving season wraps. The group of cows that gave birth during the blizzard weren’t due until Thursday.

“In theory, we got a specific date that they’re due, because they were all artificially inseminated on the same day,” he said. “When you have a storm move through and the barometric pressure drops, typically you’re going to have calves come right before the storm, or during, or right after because of the atmospheric pressure and the way the weather sets up.”

The bomb cyclone is set to break records in Colorado, but having come out on the other side, Spiller considers the storm a blessing. The ranch he operates hasn’t been the only one suffering through a dry spell in the last couple of years. He anticipates that the moisture collected in this storm will make for a fruitful spring for ranchers in southern and eastern Colorado.

RELATED: It was 60 degrees on Sunday and people in Elizabeth are still digging themselves out after the bomb cyclone

“As hard as this one event was on the livestock and us, for the short term… the rain that came immediately before we had this snow and this really wet snowfall, is the difference between being able to maintain this cowherd and having to get rid of it,” Spiller said.

Colorado Farm Bureau wrote that ranchers reported little damage from the storm, unlike some places in Nebraska. In coming days, Spiller says they’ll watch for other health problems in the cows because, like people, stress can manifest physically for them.

RELATED: You can't blame the 'unprecedented' Nebraska floods entirely on the bomb cyclone. Here's why.