CSU: Current inclusive language guide does not discourage use of ‘America,’ ‘American’

The university said a draft version of an inclusive language guide meant for staff members was leaked. It has since been picked up by conservative media websites. 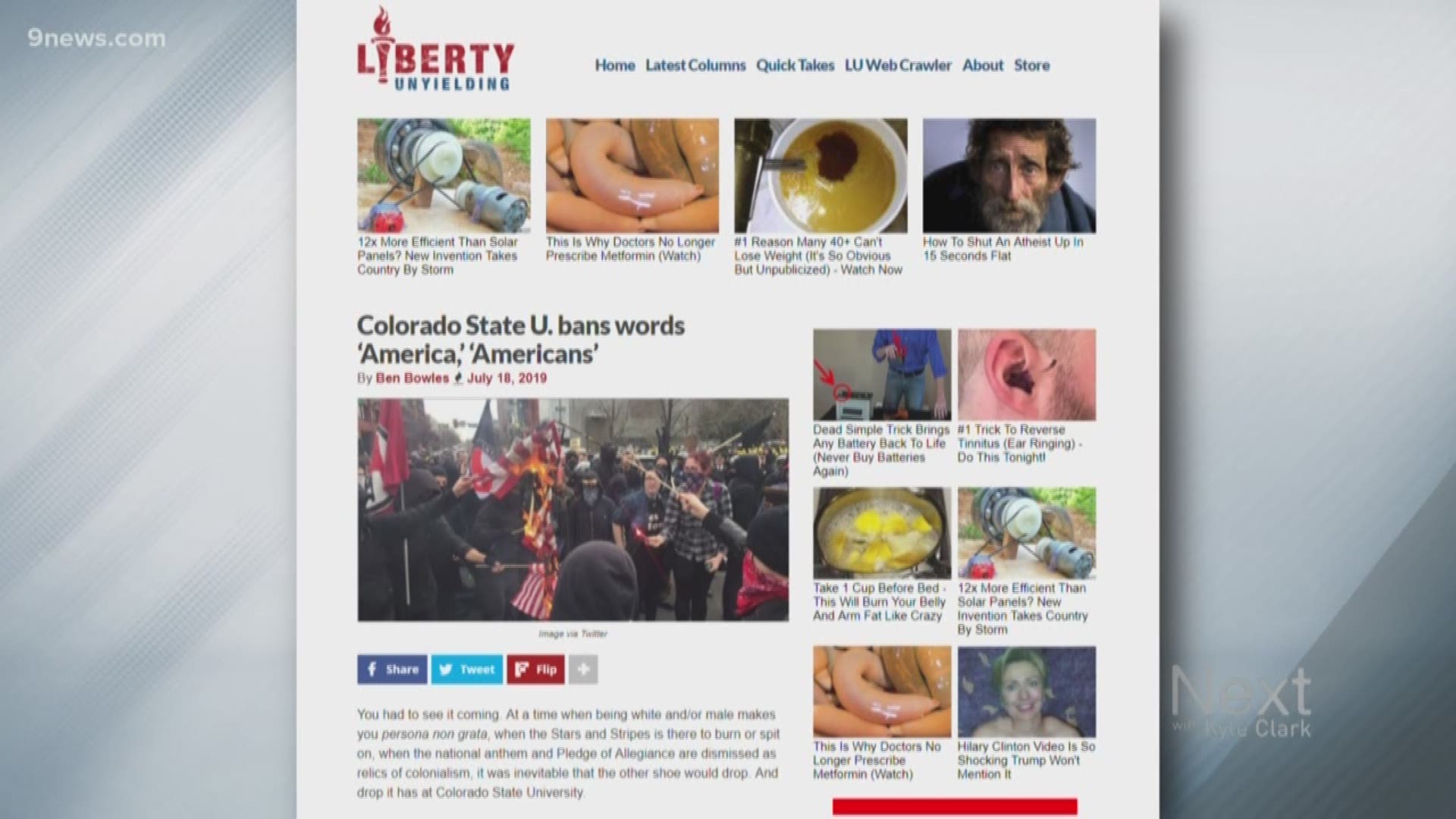 FORT COLLINS, Colo. — Colorado State University has issued a statement clarifying that it did not distribute an inclusive language guide discouraging the use of the words “America” and “American” after a draft version of the document was somehow leaked, promoting a backlash from national conservative media websites and one U.S. representative.

“Statements being made on social media and in online publications are untrue and based on an outdated document,” a statement from CSU System Chancellor Tony Frank reads.

The “inclusive language guide” was created by a group of CSU staff members, according to Frank, and was designed as a “free resource for people who were asking for help to avoid saying something unintentionally that might needlessly offended someone with whom they were working.”

“Most of the suggestions in it are common sense and have been in common use for decades,” his statement says.

The draft version of the list did include “America” and “American” as words to avoid, but this did not ultimately make the final version of the publication.

“They decided against this on their own and deleted that from the draft before it was ever finalized or circulated to campus,” Frank wrote.

Mary Ontiveros, CSU’s vice president of Diversity, said this was included in the draft of the guide because “America” might mean something to different to different people, depending on where they’re from.

"The Americas encompass a lot more than the United States,” she said. “There is South America, Central America, Mexico, Canada, and the Caribbean just to name a few of the 42 countries in total. That's why the word "Americano" in Spanish can refer to anything on the American continent. Yet, when we talk about "Americans" in the U.S., we're usually just referring to people from the U.S This erases other cultures and depicts the U.S. as the dominant American country."

In his statement, Frank said the inclusive language guide was never meant to be used by students and is not an official policy.

This was seconded by Ontiveros, who said, “we’re not dictating anyone to use it one way or another, any of the words on that list.”

“If you’re going to use a particular word, it’s probably good to know what that word means and you can choose to use it or not use it understand that it might strike one person a particular way and others another way,” she added.

The university said it does not know how the draft version of the guide leaked.

“Why that information is being circulated now as current or factual is unclear,” Frank wrote.

A website called “Liberty Unyielding” wrote about the policy on Thursday, using the headline “Colorado State U. bans words ‘America,’ ‘Americans.’” It includes a photo of an Antifa protest that appears to have been taken in Philadelphia.

Additional conservative websites, including the Blaze, also picked up the story, and the ensuing backlash led to a tweet from Rep. Doug Lamborn (R-Colorado Springs).

“Wow! @ColoradoStateU’s Inclusive Coms Task Force decided that America is a word so “offensive” it should not be spoken,” the tweet reads. “I’m #ProudtobeanAmerica. All Americans from all walks of life should be able to say they’re proud of their country. #ColoradoStateUniversity @realDonaldTrump.”

President Donald Trump has not responded to Lamborn’s tweet as of this writing.

“We actively promote a climate of free and open debate at CSU,” Frank wrote. “The bottom line is that no one is making anyone use this guide, and we have not seen any evidence this has had a chilling effect on the climate of our learning environment.

“As a university system whose campuses strenuously advocate for First Amendment rights, we will defend someone’s right to try and avoid offending someone inadvertently so long as they don’t force it on others. Contrary to what online articles are portraying, we believe that is what this list aims to do.”

The university said in the future, it will do a better job denoting what is and is not a draft of the document.

You can read the published version of the inclusive language guide below:

Here is the draft version: