Cynthia Coffman says she 'owns' her cheers for Trump

In remarks that were made at a Republican breakfast gathering, and recorded by a Democratic group, the gubernatorial candidate said she 'owned' her support from election night. 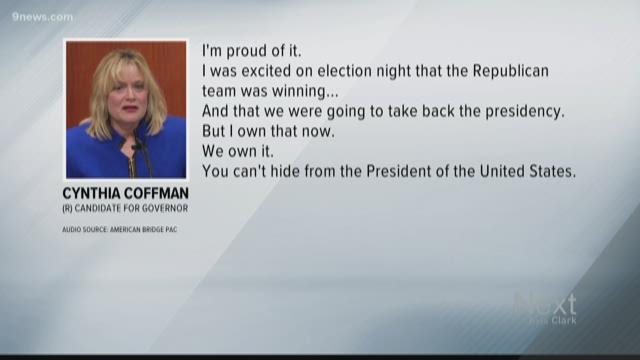 GOP gubernatorial candidate Cynthia Coffman is brushing off attacks by Democrats over her enthusiasm for President Trump’s victory, telling fellow Republicans that the party has to “own” the result.

On election night in 2016, Coffman approached the microphone at a GOP victory party in Colorado and cheered “go Trump!”

It was an unexpected moment for Colorado political observers. Coffman had been generally viewed as a moderate Republican.

Democrats have pointed to the video as a liability for her in the 2018 governor’s race.

In a series of candid remarks to a Republican breakfast gathering in Castle Rock last week, Coffman said she was “proud” of that moment.

“I'm proud of it. I was excited that the Republican team on election night was winning and that we were going to take back the presidency,” Coffman said. “But I own that now. We own it. You can't hide from the President of the United States. He's our party.”

The remarks were recorded by the Democratic group American Bridge PAC.

Coffman happily stood by what she said when reached for comment by 9NEWS.

“My team won. So yeah, I was excited about that,” Coffman said. “I embrace having a Republican President whether I agree with everything that comes out of this President's Twitter account or not.”

In the audio of breakfast meeting, Coffman is also heard warning of a possible “blue wave” for Democrats in 2018 during a plea for more activism on the part of the voters in the audience.

In our interview, Coffman repeated something else she told the group: that Democrats want to make the governor's race be all about President Trump.

They do, of course.

But the reality is that Republican candidates can't win Colorado’s primary without Trump voters.

Coffman dismissed the idea that Trump voters will be sewn up already by conservative hardliner Tom Tancredo, pointing out that Steve Barlock was actually a part of the Trump campaign.

“Generally speaking, the Republican primary candidates are supportive of the president. I don’t know that anyone has a corner on the market,” Coffman said. “I don’t think that Republicans see Trump as the most critical issue in this election for governor.”

But it is an issue that can’t be ignored.

What GOP candidates in Colorado will have to "own" this year is largely going to be up to the President himself.