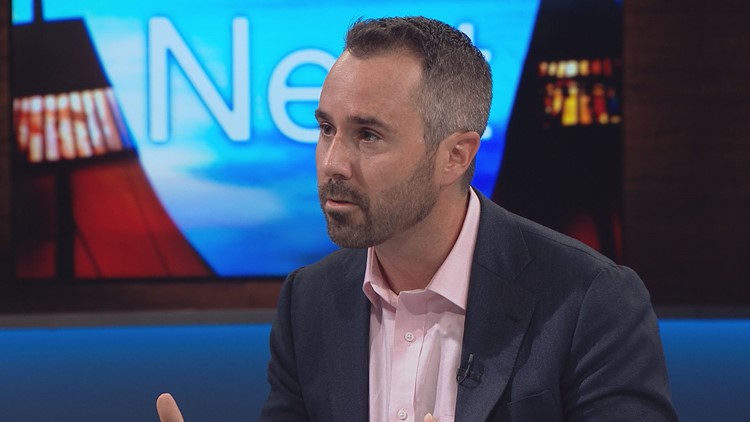 DENVER — Dan Baer tells Next with Kyle Clark that he is leaving the Democratic Senate primary and endorsing the frontrunner, former Colorado Governor John Hickenlooper.

"I still believe that I had a strong candidacy and a strong case to make,” Baer said. “I now I think it’s clear the John (Hickenlooper) will be our candidate.”

Baer, a former ambassador in the Obama administration, was relatively unknown outside political circles but emerged as a candidate to watch in the crowded Democratic primary.

He entered the race posting a $1.1 million initial fundraising quarter which was a record initial quarter for an LGBTQ candidate, his campaign told 9NEWS’ partners at Colorado Politics.

The Democratic primary field, which once numbered a dozen candidates, is slowly clearing for Hickenlooper, the choice of the Democratic Senatorial Campaign Committee.

Baer acknowledged that a competitive primary might strengthen the eventual nominee, but said he was not interested in remaining in a primary he no longer felt he had a path to win.

“To stay in just to be a sparring partner is perhaps an act of service greater than I’m willing to make for the time being,” Baer said. “I can also make a contribution from the outside.”

Hickenlooper is a heavy favorite in the Senate primary following his relatively late entry after his failed presidential bid.

Baer joked that he might swap races with his former boss.

“I’m here to announce a Reverse Hickenlooper,” Baer said. “There seems to be an opening in the presidential race.”

Baer has twice stepped aside for establishment Democrats who have had a change of heart and entered races where he was running.

He exited the race for Colorado’s 7th Congressional District when the Democratic Congressman Ed Perlmutter reversed his decision and decided to run for re-election.

“Nothing is owed to us in this life and certainly not in politics,” Baer said. “You know you are taking a risk when you get into it. But the values that drove me to get into the race and the values that I think are most at stake in our country today are the values that will drive me in the next adventure.”